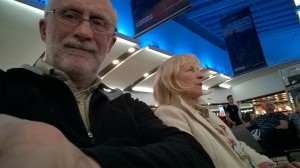 The flight to Hong Kong left 20 minutes late and only managed to make-up a few minutes on route. This caused some consternation as by the time we had disembarked, it left us with just 30 minutes to transit, having passed through the airport before we knew it was huge. Unlike the transit I made in June with Jamie, we gleaned the gate number and level from our seat media terminal on the plane.

Despite a rather foolish (shamed to say) British family in front of us at the transit bag scanner, who seemed oblivious to the people behind in a quickly growing queue as they professed surprise at the various banned articles in their bags and then while other illegal goodies were being confiscated had the cheek to slowly gulp down the two bottles of water also discovered.

Resisting the urge to throttle them we eventually did make our onward flight to Sydney. It left on time and arrived 10 minutes later than schedule. Having using the Sydney Transit system earlier in the year I was very impressed with its efficiency and felt confident that we wouldn’t need the usual Hotel transfer I usually organise beforehand. And this proved so, we caught the train to Central Station without any fuss and the Mercure Hotel was located just outside the station, easy! The only worry was whether we would be allowed to check-in at 8.30am, but this was unfounded as by 9am I was having a refreshing shower in our room.

We had flown with Cathay Pacific economy class. A good airline, lovely food, though I wouldn’t recommend the chicken congee, ever. They have a rather depressing system of calling passengers for boarding. There are so many tiered categories of seating and privileges that by the time economy class is called you are in no uncertain doubt that you are in ‘cattle class’. No upgrade for us this time to business class as with our Vietnamese trip! However, once herded on board we were treated and pampered as with any other airline we have travelled on. A bit of ‘sensitive’ training for the boarding staff would not go amiss to improve customer relations. After all, we get the point as we have to troop past the ‘privileged’ in First and Business class to reach our seats at the rump of the plane.

Showered and refreshed we first visited the hotel concierge to discover where the Lyric Theatre was. Though there was heavy rain as we landed, the sun was out and the the heat building as we left the hotel. Discovering that the ticket office was closed, because unknown to ourselves, it was Australia Day!  We wondered why so many flags and people dressed patriotically.

Employing Plan B we made our way to Darling Harbour where we had learnt there was going to be festivities. What a beautiful day for a celebration. Blue sky, blue sea and I guess many of the  people we mingled with were called Bluey. We took quite a lot of photos. We stopped awhile to watch some Bangra Dancers and then again to watch some Aussie Drummers bash the skins. We dallied awhile in a harbour side bar for refreshments and to eyeball the locals celebrating their country in a quite amusing way. We had to laugh at two huge kangaroos bounding along the harbour and stopping for photos. 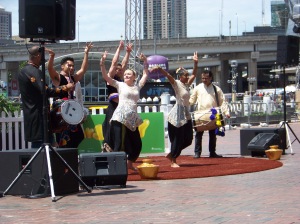 We stopped at a poster displaying the prices for a meal, drinks and exclusive view of that nights harbour fireworks display from a ship moored alongside the quay. We were lucky enough to book a table.

Walking on we were mildly worried that the Quantas 777 we were observing banked steeply over the harbour before screaming over our heads just a few hundred feet above. Apparently it had special permission to do so as part of the celebrations. Thoughts of 9/11 were in my mind.

We carried on with our meandering until we reached the Observatory situated above the Harbour Bridge and stopped again for photos. Moving on we travelled under the bridge and onto Circle Quay for splendid views of the Opera House and  a trio of three masted ships moored along the Cruise Liner quay from where we were to meet our own boat in 4 days time.

We joined the crowd along The Rocks, one of the oldest parts of Sydney, and today filled with entertainers and food stalls celebrating before buying train tickets back to Central station and our hotel. 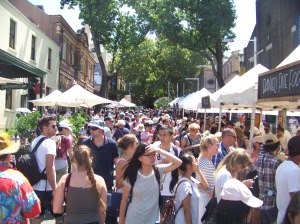 After a rest in our room we got the concierge to book us a couple of seats to see a performance of Matilda at the Lyric Theatre for Wednesday night. We set off back to Darling Harbour just ——-after 6.30pm, arriving among the many eager Aussie locals and tourists to watch the fire work display. There was not a lot of room left long the quayside, but that wasn’t our problem. We had booked a table on the restaurant boat, right in the middle of it all. A table of four attempted to get onto the boat just before us, but unlike ourselves their names weren’t on the list and got rejected.

We were shown to a table for two, bearing our name, along the side of the restaurant facing the imminent display. That made up for Cathay Pacific!  As the restaurant ship slowly filled up we could see that there was not a spare cm of harbour-side unoccupied. We were lucky to arrive when we did, or we may have not got as far as the boat.

Well, what a night. Yes, expensive as you would guess, but the food and drink was first class, the views of the entertainment (live acts  and huge video screen) uninterrupted by other bodies.
AND when the fireworks began, they lasted for nearly 16 minutes with colourful chaos and bedlam erupting into the sky choreographed to music. AMAZING (I videoed it all). When the smoke cleared we finished dessert and had another drink. Before leaving we explored the ship and discovered that the decks had been padded by quite a few celebrities; the Queen, Russell Crowe, Nicole Kidman, Hugh Jackman, Margaret Thatcher, the Beatles to name just a few. 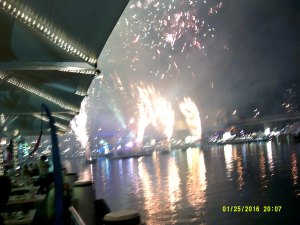 With tummies satisfied and smug in the knowledge that we have the same taste in eating venue as  the more notable, we made our way back to the hotel and bed.