The weather on the run-up to Christmas and indeed over the festive period was miserable. However, in Harborough we must count ourselves lucky as the North West of Britain suffered much, much worse with large swathes of the country disappeared under water. We had grey clouds, frequent showers and a constant temperature that fooled all the spring bulbs in to sprouting little green leaves. The thermal underwear remained firmly in their drawers and with nine people in the house and the woodburner on in the evenings (to create that festive mood) the lounge temperature often soared towards 30 degrees!

With Sue slowly recovering from her broken foot, the family rallied round and helped out with Christmas shopping and getting the house prepared. Parsnips were lifted from the allotment and the turkey and accompanying trimmings were acquired and stashed away in the fridges ready for the ‘big’ day.

I managed to spend a couple of mornings pruning the vines and fruit bushes in readiness for the spring. I dug up the Goji bushes by the patio and moved them down to the allotment as they are now getting too large for the space they are in. I gave the garden a general tidy-up in readiness for Santa, though I refused to mow the lawns, even though most of my neighbours could be heard busy with this task during the week. Winter is for sweeping snow, not mowing lawns.

The family arrived on Christmas Eve. Though sadly there was no Nan, we did have the pleasure of entertaining Lee and Mia into the Palmer way of spending Christmas.

We had a late afternoon walk into town to see the decorations and discover any last-minute bargains in Joules (which the girls took advantage of). We stopped a while for drinks in Joules’s Eatery before continuing our meandering through Harborough. We finished up with more refreshments at the Lord Nelson, before retiring to Willow Bank for nibbles and more drinks. 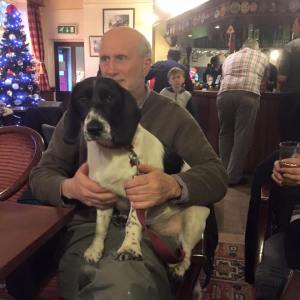 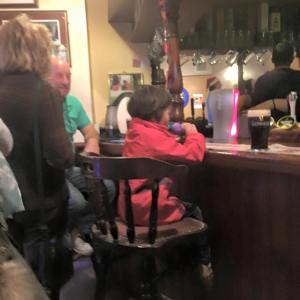 In the past we have spent the time before Santa’s arrival playing Ten-pin  bowling in Kettering, but that night we played bingo and games on the X-box until the boys fell asleep and were lifted to bed. Breaking tradition, Jamie returned to his apartment for the night as he preferred his own bed to the temporary one in my study. 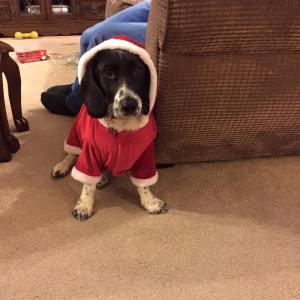 Magically overnight, presents appeared under the tree. They were first discovered by Lucas and Ellis at 4.30am, but after some subdued excitement, returned to their beds and opened their stockings with mum and dad. The next disturbance was around 7.30am when one by one, the rest of the family came downstairs to check that the man in red had done his work. All satisfied that they had not been forgotten and there were delights to be discovered after breakfast, everyone busied themselves in preparation of the first intake of calories for the day.  Jamie arrived in time to eat. 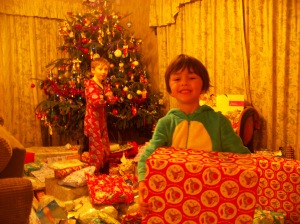 With breakfast plates and bowls all washed and put away, each family member occupied their own little spaces  in readiness for parcel delivery. As usual, I read and sorted the packages and gave them to the elves (Lucas and Ellis) for delivery. Proceedings took a necessary pause when the elves themselves received a present. I stored my little packages to one side, to open later and busied myself sorting so that everyone received a gift at regular intervals and didn’t have to wait long before the next one arrived. 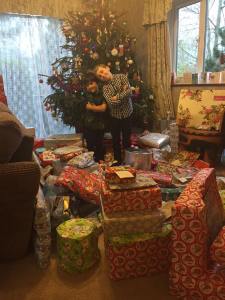 With all packages opened and wrappings stuffed into plastic bags for later disposal people set about the business of finding out what others had received and tidying their own piles into some sort of order. Soon instructions were being read, batteries being sought and  plans made.

As it was Lee’s birthday on Boxing Day, we had a cake lighting  ceremony. He was going to celebrate it with his parents the following day.

During the morning there was a minor hiccup when the oven door fell off. With a danger of Christmas dinner being without the turkey, the oven was too hot to exact a proper repair until it had cooled down, so the door was put back in place and held there by a stack of heavy weights.  It was cooked beautifully.  We must remember this trick next year. 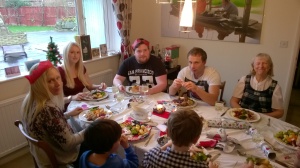 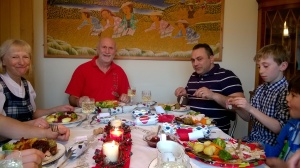 With another festive fayre safely stored away and pots and pans all washed and returned to their proper places it was decided to combat the flab by having a walk. Driving to Foxton, we did the locks. There were a few hardy souls doing likewise, but not many. The restaurant by the bottom lock was doing a roaring trade from those too idle to plan prepare and serve their own Christmas menu.  They seemed to have enjoyed themselves. Perhaps one day?

Returning home, we were soon engrossed with Christmas tea and then said goodbye to Sarah, Lee and Mia. Unfortunately, Sarah had to work that evening and the following day they were due to visit Lee’s parents in Cotgrave and for Lee to celebrate his birthday. 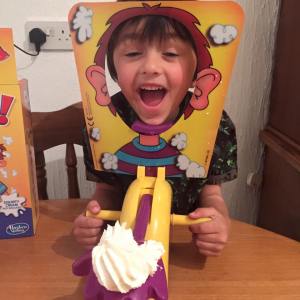 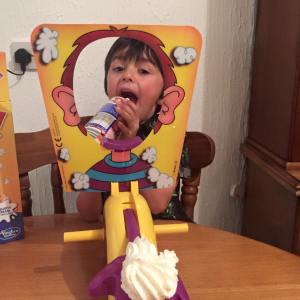 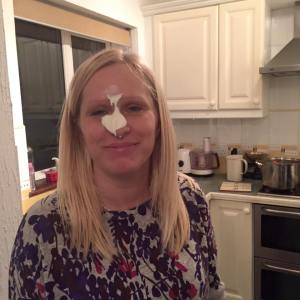 Boxing Day was Greyhound racing in Peterborough.  This year we had decided to book a couple of tables in the executive suite to ensure that we got seats. They were very expensive but with Sue’s poorly foot we didn’t want to risk having to stand all day. It was a good call. Besides the usual fun of losing and the occasional win (for some), we had the services of a hostess who took our bets (so no walking) and endless glasses of mulled wine and mince pies. Later on, other  buffet delights were brought. We were stuffed and those that weren’t driving, quite a bit tiddly. 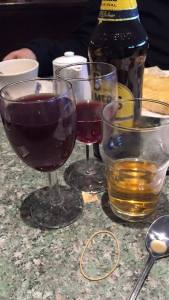 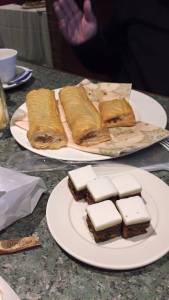 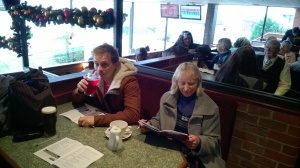 Returning home we entertained ourselves playing family games, before retiring to bed.

The following morning some in the family took advantage of the sales, later in the evening Suraj, Jamie and I went to the cinema to watch the new ‘Star Wars’. Enjoyable, similar plot to the very first one. The central heating system decided to break down. The engineer promised to come the following day. 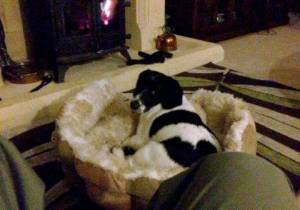 The next day Sarah, Lee and Mia joined us again.  The engineer arrived to fix the boiler and after replacing the control board, it worked fine. Later on we all went to the Sondes Arms in Rockingham for a splendid lunch. Returning home I took Mia for a very muddy walk and then had to give her a bath before we departed for the pantomime ‘Rapunzel’ at the Cube on Corby. Again we had great seats near the stage and had a thoroughly enjoyable evening. The Cube is truly a lovely theatre with a very intimate atmosphere. The Braunstones had to return home that night as  again  they were both working the following day (no rest for the wicked). 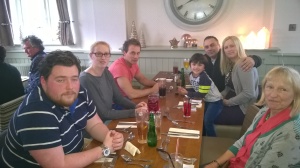 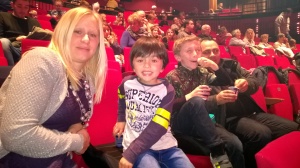 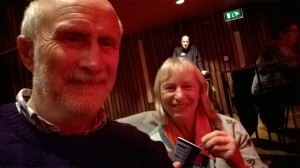 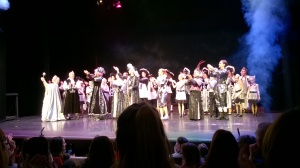 With Sara and Lee back in Leicester, Jamie sleeping at his own apartment, the Rothwells left us to return to home after lunch the following day. The weather hadn’t improved but I took the opportunity to get out the bike and cycle a few miles. Ooooh it was hard going carrying those few extra pounds!  I determined to eat less and cycle more over the coming weeks to get back to some semblance of fitness.  So far …………    I have achieved one of those targets! With the house now back to quiet mode and down to a reasonable temperature, the heating has been ‘fired-up’  only in the late afternoons, the global warming temperatures have continued to ensure that the donning of any thermal underwear has not been necessary (saves on washing).

Over the previous weeks Sue’s mobility has slowly  improved as the bone knits and she has started to use her walking stick less. It was only today (6th) that she ventured out in the car herself following an encouraging prognosis from yesterdays visit to the doctor. She returned from her free-form shopping trip all buoyed up and visibly happy that she didn’t have me trailing along getting up to shopping mischief.

With the family gone I set about the task of pruning the large apple tree in the back garden. Only a few years ago I would have completed the job quickly and with few aches and pains, but the work seemed an endless drudge, not helped by the fact I had to wear full waterproofs as it rained constantly throughout the four days it took to complete the job. Though I have a green house full of next years logs and the tree looks as if it has been given a really extreme but beneficial  ‘short, back and sides’  and the myriad of twiglets scattered around the garden have been relocated to the dump, I don’t feel that ‘warm-glow’ one usually acquires after a task well done, I ache too much and am tired.  Perhaps, I should have forgone my early morning cycling mud-baths? 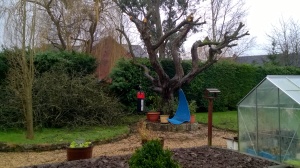