Another good nights sleep. This morning Jamie made coffee and breakfast while I had a shower. The shower blocks in both camp sites we have stayed in have been very good with plenty of hot water, though unlike Katoombah where the block was directly behind our van, the one here is a couple of minutes walk away, which means that late at night, the little lake at the side of our plot increases marginally.
We had been hoping to go Kayaking on the local river today, but when I phoned them this morning, as it was out of season they couldn’t raise the staff to get it organised. Plan B came into operation, which was to explore the coast in ‘Shiela’.
We set off towards the next little settlement south, Broken Head. It didn’t take long to get there and after parking we hit the beach. The ocean was already dotted with surfers and a few families were settling themselves on to the sand. We walked to the rocks at the end of the beach and watched the surfers for a while, before finding a trail that led up the cliffs and over the headland. The path led to a few secluded beaches, again with surfers just off the shore, briefly practising their skills before being wiped out.  Returning to the car we headed further up the coast. 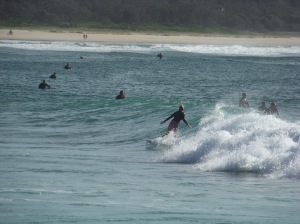 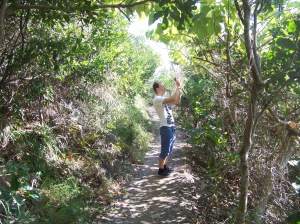 We first visited Lake Ainsworth in the hope of hiring a kayak, but we couldn’t find any, so we moved on.
We drove through the very pretty town of Lennox Head, before continuing up to the Head itself to climb the path to see the views. Driving back to the town we parked and found a bar on the front and had refreshments and pizza. While there we discussed on where to go next and decided to head inland and find Minyon Falls.
It was nearly a drive to get there along roads that can be best described as poor condition narrow country lanes with potholes that you could possibly disappear into. Of course the route was ever upwards and eventually the tarmac ran out and we were driving on gravel and dirt tracks. One good thing about Aussie roads is that they are well sign poster and that with the SatNav on my phone meant we always knew where we were. Arriving at a small carpark in a forest glade, with marked out parking bays, rural toilets (Dunnies) and even the free gas BBQ’s we seem to see everywhere. I guess the Australians sensibly have decided that having the population carting charcoal and their own BBQ’s into the bush and forests is going to be the cause of many bush and forest fires. Give them a free option and most, if not all will use them, and they certainly do seem to. I wonder if the UK Government would think this way, I guess not. 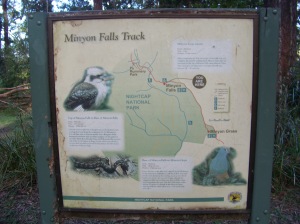 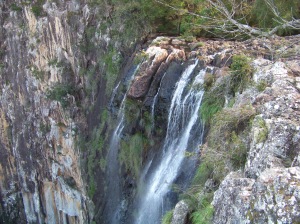 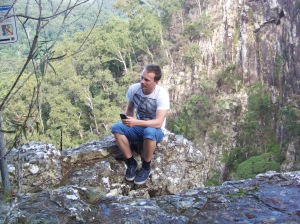 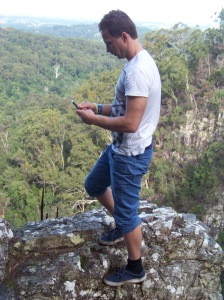 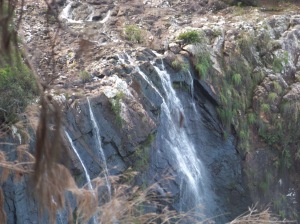 The falls were only 50m away from the car park and reached by one of the wooden walkways that you find everywhere.Oh yes, they were fearsomely high, as seen from the well guarded platform to one side. Despite a confessed fear of heights Jamie of course climbed the fence and sat on the very edge of the falls to take photos. I joined him. With Jamie’s aversion therapy over we chatted to a woman who was waiting for her friends to return from the base of the Falls, some 4.5 km away down a difficult path. Afterwards we crossed the river and then traversed the cliffs on the opposite side of the waterfall to take some more photos. We opted to not bother with the route down to the base when we met an exhausted woman returning after ger 9km round trip. She said the views up the Falls were good but she didn’t sound convincing enough. We returned to the car. 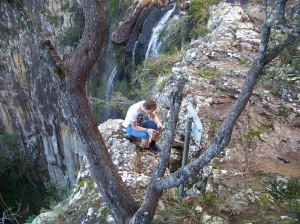 The route back to Byron Bay saws us there around 3pm. We first did some shopping in the town before returning to the campsite to relax awhile. Around 7pm we drove into the town and found the Balcony Restaurant and Bar, as the name suggests we had a table on the balcony. We chose two fine fillet steaks with the trimmings and beverages. The meal was the best we have had in Australia so far, though considering we have been on a diet of fast, junk food it isn’t difficult to beat. Having paid the bill we walked through the town to the bar we first visited and drank further beverages and listened to the band that were playing. It was 9.30pm when we left as it is another early start tomorrow on our return to Sydney.
The town was very quiet as we made our way back to the van, very different to the ‘long weekend’ we have just experienced. It looks like the Aussies do take their work seriously. Returning to the campsite we listened to the radio awhile before making the beds and retiring.