What a horrible day to begin a journey!
I had booked a stay at the Holiday Inn Express hotel that night, so that we would be conveniently close to Heathrow for our departure at noon the following day. As Monday was a working day for Jamie, we weren’t going to travel until he had got home, showered, eaten and then phoned to be picked up. I had busied myself during the day sorting out the garden and allotments, and made sure when I returned that Nan’s bench was going to be installed on the 16th by ringing aunty Doreen. The weather was getting progressively worse. The rain had started and the wind was whipping up, lashing my courgette plants so that I had to venture outside and secure them down.
When Jamie did ring, it was to inform me that his rucksack zipper had broken and could he borrow one of my hold-alls, and by the way could mum send over his dinner. Sue dutifully plated up another portion of the meal we were having that evening and I ate mine (now smaller), then had a shower before setting off to Jamie’s apartment. On arrival I handed over the hold-all and rucksack and then  visited the cash machine to replenish my wallet and fill up the tank with fuel. Returning to Jamie’s it wasn’t long before we were heading south down the motorway through worsening rain and wind.
The only incident on our ‘blowy’ drive was when a car in front lost a bike off its rear rack. I had spotted it come off and bounce crazily along the lane we were in, I took avoiding action without too much bother, though looking through my rea view mirror, it did come as a bit of a surprise to those cars behind and more drastic measures were being taken. We passed the offending car about half a mile further on. The driver was looking bemused and counting the remaining cycles on the rack. I do hope nothing tragic became of his lack of attention when securing that bike.
We found the hotel without any trouble. Sue and I had not stayed in this Holiday Inn previously so its surroundings were unfamiliar. It was very busy and we had to wait 10 minutes or so before we could check in. Disappointingly we were not upgraded to executive room (has my luck run out?) However, the accommodation was quite suitable, but it wasn’t long before we were ensconced in the bar, to refresh ourselves and observe the passing clientelle. I would say that 90% were of Asian (Far East) origin, though a large group of Scandinavian workers did join us at the bar for a drink. It was 11pm before we returned to the room to watch ‘Family Guy’, though Jamie was soundly in the land of dreams soon after it had started. 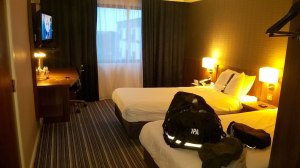 We took break fast a little earlier than planned (7pm) as we were awake and eager to start the day. It was a buffet system that seemed to work very well, though I had to smile when the oriental gentleman preceding me at the hot plate placed sausage, baked beans and then scrambled egg on his plate, looked at the container of grapefruit next to the egg and then added that, followed by the orange segments next in line. I can sympathise, I can remember standing at the breakfast buffet fayre in many a hotel in the Far East and wondering what goes with what and how do you eat it? I guess I have raise a few smiles from the locals in turn at my selection.
After showering and check out we joined the London commuter traffic to ‘Purple Parking’, they were the company who broke my rear view mirror many years ago and I swore I would never use them again. Well, I have done so many times. I must be a very forgiving person?  The SatNav took us straight there and after a 15 minute wait we were in the van making our way to Terminal 4 yet again.
Checking in occurred smoothly, as did security and passport control. We found the aircraft already docked at Gate 6 so we knew where we were to board and as is usual went to peruse the shopping facilities, stopping briefly for refreshments.
We hadn’t checked our boarding cards so it took a while for us to realise (it was Jamie in the end) that the reason we weren’t being called for our seat at the gate was because it was for ‘Economy Class’, and we had been upgraded to ‘Business Class’ on the top deck of the aircraft and that had a dffferent gate. We were soon snugly sat in our extra wide seats with extra leg-room and even capacious side bins that I managed to fit my Tablet, shoes, neck rest and bum bag in, so that they didn’t cramp my space as the usually did in ‘Economy’. The food was lovely and after three glasses of red wine I began to feel a small amount of sympathy for those unfortunates, a few metres below. The only drawback was that we passed through ‘First Class’ on the way to our seats and a had a glimpse of what really might have been.

Only 13 hours and 5 minutes to go before we land in Kuala Lumpar. I suppose it would be prudent to say, ‘Touch wood’, as we are on an Air Malaysia flight.
We managed some sleep. Jamie seemed to watch films continuously throughout most of the flight and I managed to watch a couple of which I found ‘Kingsman’ a rather entertaining spoof. To give Malaysia Air credit, they provided a first class service throughout. Meals and snack arrived regularly along with offerings of thirst quenching drinks.
We landed at 8.15am and disembarked the aircraft at 8.35am. A little worrying as the captain had mentioned that onward passengers must be at the Gate 20 minutes before their departure, our flight was leaving at 9.00am! Hurrying through the maze of corridors following the transit signs we came across a gentleman holding a large card with ‘Sydney Gate 14’ written on it. Hurrying on we managed to find the Gate at the other end of the airport and on a satellite (typical). Passengers were queueing at the x-ray machine so we joined them and were soon sat in our seat awaiting take-off. Phew!!!!!!
Seven Hours to go. 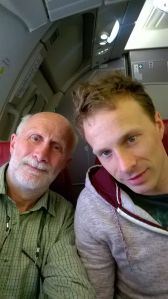 Unfortunately we didn’t get upgraded on this flight, so sleeping on the smaller seats was a little more trickier, however we both managed some fitful minutes in the ‘Land of Nod’. I watched the sequel to the ‘Best Marigold Hotel’. Not as amusing as the first, a little thin on the ground with plot and far too long, but it passed the time! The food was again excellent, though snacks weren’t as frequent.
It was interesting flying over the Australian interior, a bleak wilderness of sand and rock that was devoid of roads or any signs of life. As the scene below rolled by I compared it with the displayed map on the interactive map on the seat in front, not much on that either, just Alice Springs, Ayres Rock and Coober Peedy, I must have missed those.
As we had such a rushed transit in Kuala Lumpar there was a worry that our baggage wouldn’t travel with us, and that’s just what happened to Jamie.  After landing at 7pm my rucksack plopped off the belt but wasn’t followed by his hold-all. Four other unfortunate passengers suffered the same fate. After filling in his details at the appropriate desk, the errant luggage was tracked down to Depensar (Bali), it had obviously decided on a different type of holiday. With phone numbers and email addresses imparted we were assured that it would be rounded up and sent to wherever we were at the time (we shall see). Feeling optimistic we left the airport and caught a very smart double-decker, city bound train to Museum (the stop nearest our hotel). Exiting to street level I used my phone to lead us the kilometre to the Arts Hotel on Oxford Street. 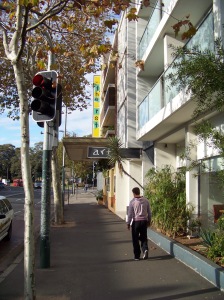 Checked in, showered and changed we headed back down Oxford street towards the bright lights. We stopped in a late night supermarket to buy Jamie a tooth-brush. That accomplished, we dived into the centre of the city and found a place to  sample Pizza and local beer. We were both impressed with Sydney right from the very first sight of it as we flew into the airport. It must be one of the best views of any city at night. Looking through our little round window we marvelled as the plane flew past a spectacularly illuminated Bay Bridge and Sydney opera house, lit by a fantastic skyscraper backdrop. And now we were at ground level looking up instead of down.
Stomachs satisfied we trekked back to our hotel to bed.