There was a knock on the door at 7 am. Sue was already in the shower and I was coming too from a night on the hardest mattress ever. Peeking through the cabin window I could see that the sea was flat calm, the spectacular islets were still there and some of the boats that had shared our anchorage during the night were chugging their way to the next destination, disturbing the mirrored surface, causing the reflections of towers of tree-covered limestone rocks to shiver as if to cast off the effects of sleep. Snap, snap a couple of photos taken and then into the shower myself.

Breakfast saw everyone seated in the main room and tucking into another large fayre of what could pass for an English breakfast if you ignored the fruit and pancakes.
Donning life-jackets we all met up again on board the cutter for a short scoot across the water to one of the near islands to see what was promised as being a very surprising cave. Hmmm, I thought, this is going to have to be special to surprise this little digger. Our journey turned out to be somewhat of a race with dozens of cutters from other boats appearing and vying to bag the best route onto the small quay.
Stepping onto shore we lined up with those that beaten us and smirked at the less lucky who were piling up behind. It was incredibly sticky and I was looking forward to reaching the cool of the grotto, which after giving our tickets over to the man at the bottom of the steps, was soon reached by way of an entrance halfway up the rock face. 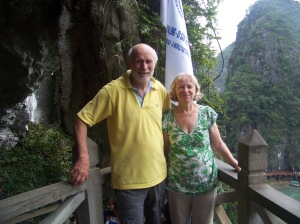 I was mildly surprised by the first of three chambers, as the route had been well paved (though naturally slippy) and well-lit. I took a few photos. The second chamber was intriguing as you reached it through a narrow slit and it opened out suddenly into a vast chamber of colours. I took a few more photos as we wound our way down onto the floor of the cave, then I realised that once there, you could see that our entrance was through a bulge in the wall and the cave stretched behind and under our entry point. When we reached the third and last chamber it was big, awesomely huge. Photographs would not have captured its immensity so I switched to video and panned across the scene that stretched out below and to both sides. Surprised? Yes, and yet again when we reached the floor of the cave when after some ten minutes walking we turned a corner and there again it receded into the distance, and then again. And what is the name of this system? The Surprise Cave. Enough said! 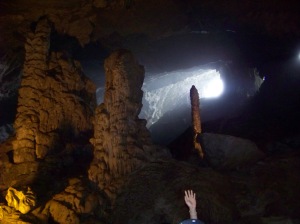 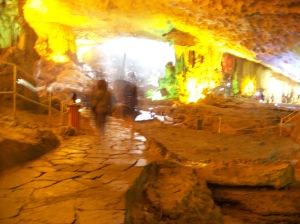 Returning to the cutter we scooted back to the boat and as instructed packed our bags and went to the main in the room to check out. This meant settling our bar bill, which gives me great pleasure in pointing out that Sue’s portion was greater than mine! We lounged around on the decks for a while the boat meandered it’s way back to Halong Bay Quay.  During the latter stages, we were treated to a vegetable flower making lesson by the chef. Of course, he made it look easy, but I guess if we attempted it, Sunday lunch would have to be started on a Saturday. 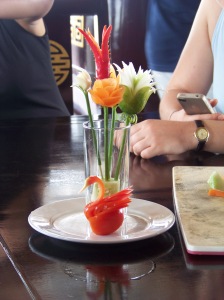 It was with genuine misgivings that we disembarked. We had thoroughly enjoyed our time onboard, much of which doesn’t appear in this blog. If ever we return we shall do the 7-day cruise around the whole island system.
One footnote; on return, as we were making our way between the islands, we came across a pile of garbage that had been recently jettisoned by one of the cruise boats. Plastic and food waste was slopping about on the waves and would no doubt become washed up onto the craggy islands, impossible to remove without great expense and effort. What a shame, I hope the Vietnamese do not spoil this treasure. 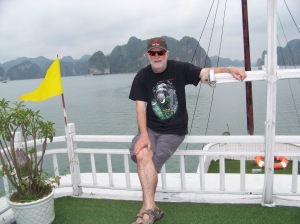 Before boarding the bus to return to Hanoi we were treated to another very substantial meal at a restaurant across from the quay. I have found that I have a taste for squid, particularly when I cover it in the very spicy red condiment that appears on the table. Sue is worried that I was a fish lover I have yet to touch the fish that accompanies every meal. I haven’t yet pointed out that Vietnamese fish is very bony (but tasty) and squid is not. 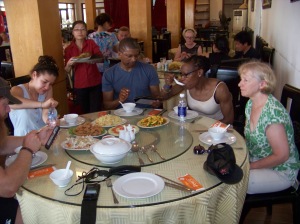 The return journey was quite a bumpy one because the carriageway on the way there was new, but the return has yet to be renovated and full of ‘surprise’ potholes. We had a brief stop at the same way station as the journey there and this time the only things bought was an ice lolly and a postcard and we were first back on the bus.
Sue showered when we returned and then we set off down the Hang Doa Road for a spot of shopping. We started by having drinks on the corner by our favourite kamikazee roundabout and again watched the near carnage unfold, before hitting the shops in earnest. We returned to the hotel several hours later without any goods. Sue was looking for a ‘thin’ top to buy and neither of us could have predicted how difficult that would have been. Now Sue is not a big lady, yet compared to the average Vietnamese woman she is a veritable giant! I lost count of the number of shops we entered and rustled through racks of clothes to find one that looked as if it would fit. One limiting factor was that when Sue asked to try an item on, the answer was always no. However, the Vietnamese shopkeepers are very honest, several times they stopped us from considering certain items as they indicated they were too small. So no sale was made. Returning empty-handed to the hotel, we checked up on the time for the next day’s transfer to the airport and was pleased to hear it was a reasonable 1 pm, then we changed for dinner and ventured out once again. 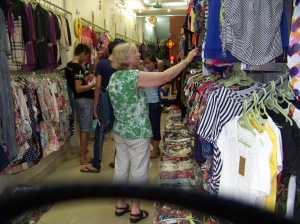 We chose another restaurant on the roundabout, but this time opposite our usual. Again, high enough to look down on the entertainment. Tonight we had three guest acts of balloon sellers who suicidally stood in the middle of the traffic vending their wares. What fun we had eating our meal. I would recommend this to anyone visiting Hanoi as a must-do tourist attraction.
Afterwards, we braved the traffic back to the hotel and bed. We have honed our dodging skills on the streets of Hanoi, but we have yet to pass the real test: Saigon (Ho Chi Minh City). Where we are reliably told by fellow travellers the traffic is twice as bad. Ooooooooooooooooooooooerrrrrrr!