I woke at 6am showered, packed my rucksack and then Sue woke. By 6.30am we were in breakfast, surprised to see so many people already seated and eating. What we hadn’t known was that the hotel next door, was attached to ours and they shared restaurant facilities. We sat at table with a couple from Reading, called Jenny and Ron, they remembered us from the flight and we hit it off straight away, they had such an easy going manner.
After breakfast we returned to our room, sorted ourselves out then Sue sat in the reception while I wandered down the lane to take a few photos of the Vietnamese having breakfast in the street. When I returned Jenny and Ron were also waiting for our mini-bus pick-up to Halong Bay. On time, we were ushered by our guide for the next two days down the same lane I had just photographed and boarded a bus with 6 other passengers.
The journey through the Vietnamese countryside was to take 3 hours with a brief stop for toilet and refreshments, luckily our necessity stop was at a retail outlet for artwork and jewellery and Sue took the opportunity to purchase some Vietnamese silkwork. She insisted that one of the seamstresses finished it off by embroidering Vietnam into the picture. This took a while and I am afraid our fellow passengers had to wait. How annoying that has been in the past! 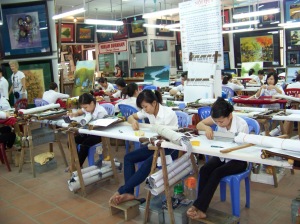 When we arrive at Halong Bay City we disembarked and then boarded a small  Tender which took us to our boat for the next two days. We were given cabin Number 1, and it proved to be rather nice. After settling in we then made our way to the  main room and sat with the rest of the guests  and had lunch. There was plenty of it and very local, squid, Halong Bay fish etc. As we ate we passed through some very beautiful scenery. Thousands of small islands with limestone cliffs rising vertically from the sea, mostly covered in vegetation. The subject of millions of posters and postcards. Too beautiful to describe, you have to see it. It truly is an awe-inspiring place.

We  cruised past the place where the Top Gear filmed a Christmas episode of their road journey and they sunk a car or two in the Bay. So it was not as remote as they had us believe!
We anchored near a small island that possessed a Panoramic Viewpoint and a small beach and took the Tender to reach it. First we climbed the mountain to take the views. Judge for yourself with the enclosed pictures. Then returning to sea level I went for a swim in the sea. Two young playful Vietnamese ladies seemed to want to play a game of splash the european,  and I reciprocated, much to their enjoyment, 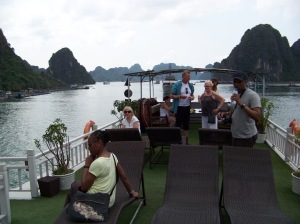 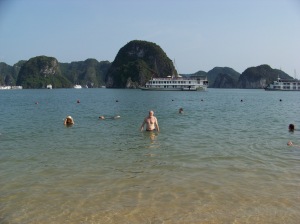 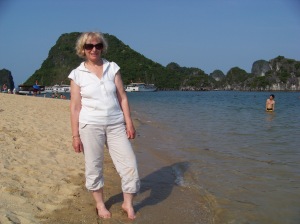 The group gathered together and rode the Tender back to the boat only to briefly drop off those that were not kayaking around the bay. Sue was keen to go but I persuaded her not to as I feared that if we capsized she would not be able to get back into the kayak. I doubted that I could have helped a one handed capsizee to pull herself back in.
I partnered the guide (Hung), and we led the other three canoes around the islands passing through sea caves and between vertical cliffs. Very enjoyable and we were too soon back on board relating our adventure. The first cold glass of beer back on board went down really well after such enjoyable activity. 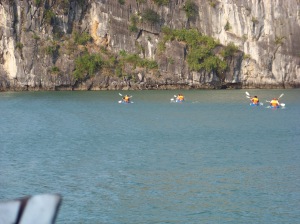 After showering and a change of clothes we had drinks on the upper deck, admired the scenery and chatted before returning to the main room and all ten of the passengers were instructed on how to make Vietnamese Spring Rolls by the chef. Not difficult as all the ingredients had been prepared for us, but fun non-the-less. they were taken away to be cooked and constitute part of the evening meal.  We relocated to the top deck again to chat and have a few more drinks.

The meal was lovely and again very substantial, though we had made so many Spring Rolls, not all got eaten. Happy hour ensued with cocktails being buy-one-get-one-free. I stuck to beer but Sue had 2 Crouching Tigers. I watched the first one being made and it consisted of quite a few complex ingredients and procedure to make a tall drink that looked like a green pond water with wriggling tadpoles. However, Sue assured me that it tasted nice and I wa prepared to believe her.
The rest of the evening we spent dangling lines off the front of the boat in an attempt to catch squid. One squid, two small fish and a jellyfish were caught. Though not by line but in a net. Yes things did start to get a bit silly but no one fell over board and Sue did persevere with the traditional method longer than anyone else. I had long since moved onto the unsuccessful harpoon method. The evening was finished off back around the bar before the mattress was pressed. 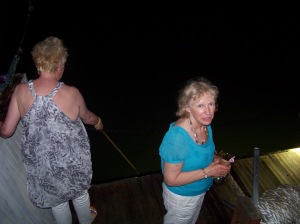