Today is a sea day, which means there is no rush to get up. However, we were still in breakfast for 8am and not surprisingly there was only one other couple there. We sat for quite a while looking for dolphins or whales while we drank coffee, but they continue to be shy and avoid the ship as they have disappointingly done on each day of our journey.

During the morning there was a lecture on Eclipses (both solar and lunar) that we both attended, Sue then went on deck to read her book while I travelled to the other end of the ship to attend an excellent lecture on the Sinking of the Bismark. We met again for lunch which we took in the Oriental restaurant.

The afternoon was spent by Sue reading her book on deck  and then watching a film in the cinema. I made my way to the Crow’s Nest and read ‘Biggles’, occasionally looking for fins in the sea off the bow. We met again in the theatre for a performance of the show that had been cancelled due to a stage malfuction  a few nights prior, I had been engrossed in my book and missed the first ten minutes.

Coffees in Al Fresco followed with a small plate of food that some-how turned into two plates of grub! I was really determined first thing this morning to visit the gym but failed miserably and the chorus line from a well known Queen song that keeps running through my mind,  ‘another one bites the dust’ has been

replaced by ‘another bite scoffs the pie’ and ‘another notch in the belt!’  Earlier we had been given a questionnaire about our cruising experience by our cabin stewardess, she seemed very concerned that we might grade her poorly, we reassured her that we would not. We filled it in during coffee and gave her a good mark to satisfy OFCruise.  She will now hopefully be able to continue to feed her family back in the Phillipines.

There wasn’t any pre-dinner entertainment that we fancied, while Sue took the opportunity for a nap in the cabin I went on deck with the binoculars and watched the many oil and gas platforms we were passing. The flat calm sea under clear blue skies looked quite Caribbean. 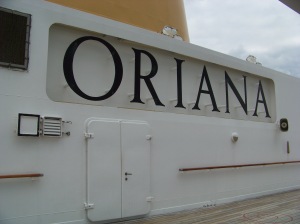 Thankfully tonight was the last Black-tie dinner of the cruise. The trousers have become increasingly tighter on each occasion, if I had to wear them once more on this ship I guess I would have to substitute shorts and fall foul of the strict dress code!

The evening meal was created by Marco Pierre White (again), for once I had dessert instead of the cheese board. At the end of the meal we were treated to a parade of chefs all wearing extremely ridiculously tall hats that they couldn’t possible work in, they must have been for show. The entertainment afterwards was  the second show of our Cuban comedian/magician. He was just as rude to the guests as on the previous occasion and quite hilarious.