We had been told the previous evening that the ship would be entering the fjord leading to Flam at 1am and that we were welcome to go on deck and witness the fabulous scenery that we were sure to see. We woke at 7am and through the windows of the breakfast restaurant  we could indeed see the vertical cliffs of the fjord and that it was raining! Kitting ourselves for the weather back in the cabin we ventured on deck to find that the ship was beginning its docking manouvres and the the rain had stopped. There is not a lot of point in attempting to describe the spectacular scenes that stretched around the ship, I shall leave that to the photos I insert into this blog when we return to the UK. 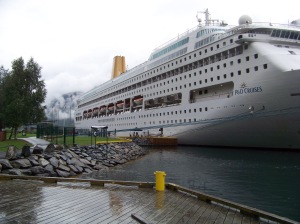 We had been told that we would be tendering to the shore by boat as the ‘Rotterdam’ would be occupying the only berth in this tiny village when we arrived. Luckily overnight she had cancelled this port in her itinerary so around 8.30am we walked off the ship. We spent around an hour and a half wandering around looking at the houses, the boats and the silly little Thomas the tank-engine train that was available to take tourists around (quite surrealistic). Equally silly would be if Braybrook offered donkey rides from the church to the village hall! 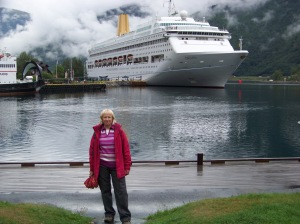 We returned for 10.30am to join a very long queue to catch our train to Myrdal. Avoiding situations like this is exactly why we spent  our family holidays ‘doing our own thing’, but I guess with three hyperactive kids to chaperone everywhere it was the least stressful way to see bits of the world that they could destroy and then leave anonymously. We dutifully stood and chatted with other line dine dancers before boarding what we were told was the world’s steepest train, by that I assume they mean ‘not funicular’ as we have been on many of those climbing much steeper inclines than this. I will leave the post-inserted photos to give an impression of the sights but I guess they won’t really do the views much justice. 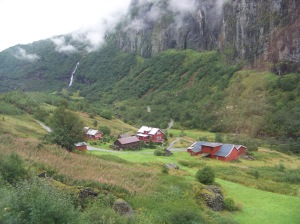 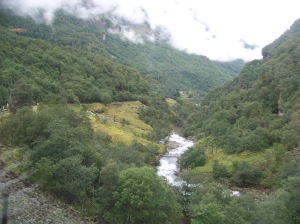 We stopped awhile at one waterfall to watch and hear a mythical Norse Maiden dance, quite odd really, especially as we did it again on the way down. We only stayed around 10 minutes in Myrdal to allow some passengers to catch the Bergen to Oslo train that was there waiting. It was a lovely journey but my only regret was that we didn’t take the option of cycling back down to Flam, if the kids had been with us we would have. I think we are getting a tad geriatric! 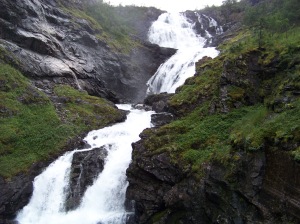 Having not eaten in several hours, on return we quickly boarded the ship, found a restaurant and scoffed lunch. We had decided in the morning to walk to a waterfall a couple of kilometres outside of Flam for our afternoon calorie burning activity. We had discovered during the morning sorte the path that led to the waterfall and this we took on disembarking for a second time. It was a pleasant walk in the warm sunshine until we came to the near vertical section up to the falls themselves. Around 2/3rds of the way up an exhausted Sue gave up and set off back down. With more calories still in the tank I carried on to the falls. When I got there I was sweating and knackered!!!! I climbed down to an inviting splash pool at the base of the falls with the intention of cooling my hot toeties in the clear water.When I got there I couldn’t make the effort to untie my boots, pull off my socks and roll up my trouser legs. Getting a tad geriatric! I sat for a while, got my breath back and set off on the return journey. 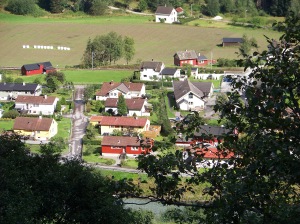 Sue was waiting for me on the quay. It had started to rain so we quickly looked in some of the shops then boarded the ship. Sue promptly went to the restaurant while I showered. As the ship began to leave port Sue found a nice spot in the sun (it had returned) to watch the scenery pass by. I trotted up to the Lords Tavern for a much deserved ‘London Pride’ and sat with glass in hand on the deck, until the contents ran dry then I relocated to the ‘Al Fresco’ for  pizza and pie before sitting in one of the lounges and doing one of the general knowledge quizzes that regularly punctuate the day. Wondering where Sue was I set off in search and yet again within a few steps of looking we telepathically met. Discovering that she fancied coffee, we retired to ‘Al Fresco’ for refreshments (and pizza).
All the while wonderful scenery slipped by on every window, so now fully recovered from our exertions and adequately ‘tanked-up’ with fuel we wandered onto deck to witness the views first hand.
Returning to the cabin Sue had a little nap and watched a bit of TV and then went up-top to view the ship sailing through the fjord on its journey to the open sea and a (according to the captain a midnight date with a storm, yippeee!). On return we dressed for the evening meal and then made our way to the restaurant. The theatre entertainment was the comedian Riki Jay who manged to surpass his previous performance by getting a little ruder.
We hit the pillow just before midnight with the ship starting to rock and roll!!!!