Since the last blog was penned there has been but a very brief respite from some quite depressing weather. Gale, storm and hurricane lashed UK has been deluged with water. The south and Somerset in particular has mostly disappeared under water and been that way for some weeks now. Here in Harborough we seem to have been spared the extremities of wind and rain and though we have existed largely under leaden skies, gleefully divesting itself of large quantities of the wet stuff (seemingly everyday), and despite the ground being so sodden that it cannot take any more, the river has only once touched the top of the lowest bank. Well done to the Welland River authorities and Harborough Council for keeping the river banks, ditches and drains clear, thus permitting the water run-off to make its way down stream free from any blockages or significant flooding (fingers crossed). As I tap away at this keyboard, the rain is rattling (yet again) on the windows and the howl of the wind can be heard over the TV. Annoyingly the security lighting frequently lights up the curtains as it gets fooled by the maelstrom outside.

Why the title for this blog? Well, astonishingly we had two consecutive days of fine weather, literally out of and into the blue. Having been accustomed to pedalling my Saracen through all forms of precipitation known to man; to wake up one morning to be faced with sun streaming through the gap in the curtain and when drawn, to discover a cloudless sky and feel warmth from a golden disc hovering over next doors roof. I guess that’s what the sun looks like! What a joy it was to pedal the lanes of Leicestershire. The fields and tracks were still denied to me, though as my first optimistic venture off road, soon revealed that wheels don’t turn through ground willing to turn into glue with the slightest of pressure. Two whole glorious days. 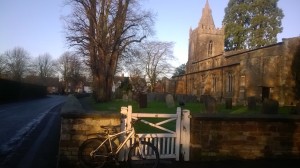 Filled with exhilarating optimism I attacked the allotments with vigour. Thinking of summer delights I first pruned the raspberries and then lost myself among the vines as I chatted to each plant, informing them of my plans to produce a superb vintage for 1914. Apologies to the many branches and buds which I considered weren’t going to accompany me on this journey, and well done to those that avoided the snip.

The folly of planting in excess of 500 leeks, in a winter that has been devoid of growth inhibiting frosts, means that you end up with plants with stems as thick as your wrist. Though tasting beautiful there is only so much leek that you can eat. One day last week we had leek and potato soup followed by leek and ham pie and I looked up the recipe for leek and pear tart. Luckily I have found an outlet in Huntingdon Gardens and the advantage is that my spare leeks have made Nan very popular with her fellow residents. 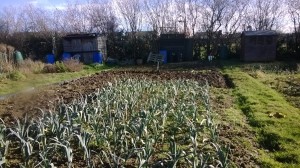 Last week, we had arranged that John Lee was going to come over to stay the night, visit a few pubs and go for a long walk the following day. However, the foul weather put paid to that. But as I had nothing now planned for that day I had a rare mooch around Harborough. I discovered a stall in the Square selling bedding. Waxing lyrical about Mr Pillow, I was gob-smacked when he appeared to know what I was talking about. After offering a few examples that were good, but not up to Mr Pillow’s standard, I mentioned that he lived on a cruise ship. Cunard, he queried? He had the very thing he said. And he did! Now we rest our weary heads each night in a little bit of Cunard heaven. When I returned home with my booty, Charlotte and Ellis were there with Nan. They had been out for lunch. They rested their heads on Mr Pillow and within the hour they also were owners of their own little bit of luxury.

The following Friday I went to see Tigers lose to Bath at Welford Road. I went with Jack Hartley (yes his initials are JR Hartley, but he doesn’t fish), Peter Cooper and Jim Hankers. In passing, I mentioned Mr Pillow. I saw Jim the following day at the Rugby Club for the England v France match, he is also now the proud owner of some Cunard magic. Tragically England lost in the dying seconds of the game, but so what? We still have the land of dreams to look forward to. Apparently while watching the previous nights match, I had been seen on Sky TV. A few of the club stalwarts had spotted me in the crowd. Though I offered, no one wanted my autograph. 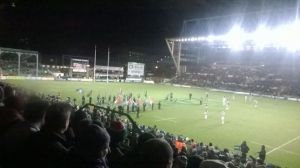 On the 8th of Feb. I took Sarah to Cottgrave where she changed cars and travelled back to Uni’ with Lee.

The following day I dug up some spare raspberries from the allotment and then Charlotte and I planted them in her own allotment. I have been turning over the soil at my Douglas Drive allotment and digging in the soil from my compost heap. While doing this I dug out a hibernating hedgehog. After completing my digging chore I wrapped Mrs Tiggywinkle in my bobble-hat and took her home. I managed to borrow next doors hedgehog house, which they had acquired many years ago and has since been unused as its original occupants had decided to drown themselves in my pool. Wrapping Mrs Tiggywinkle in a nest of shredded paper, the box was placed under the hedge in the corner of the garden. On checking the box the following morning, prior to my cycle ride, I discovered she had gone. She was not face down in the pool.

Peter has had quite serious brain surgery from an accident years ago and has difficulty in speaking clearly and to the unaware he sounds intoxicated. After my cycle ride that day I drove around to Peter’s and spoke to SkySports concerning a cancelled contract with them. He had been getting quite emotional about the affair, mostly because he didn’t understand the situation, but after speaking to them the matter was resolved amicably. Later that week I took him to Kettering hospital to attend a re-arranged appointment. Rather than waiting for him in the car-park I drove to Charlotte’s and had coffee. She hadn’t been too well during the night with an upset tummy, but she cheered up with dad there and said she felt better. She gave me a dozen eggs from her ‘girls’ to share with peter and I.

Today we had ducks on the pool. A male and female were happily paddling round and round, occasionally they got out, strutted a while and then returned to their circumnavigations. They seemed quite at home and I guess if the sunbeds had been out they would have taken advantage for a little nap. If they stay for the summer, perhaps we shall invite them for a BBQ when the weather warms up. We have oranges! 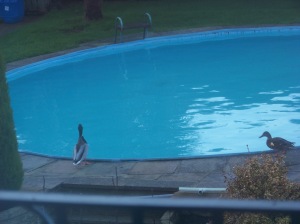 Jamie was robbed. He was delivering meat to a butchers in Birmingham that was ironically just around the corner from the street that Channel 4 is making a very controversial set of programmes called ‘Benefit Street’. He had returned to the back of the butchers to deliver an extra order when he heard the alarm sound on his van. Returning, didn’t see anyone around, but the side window had been smashed and his brief case taken. He had lost his wallet inside the case and of course all his delivery paperwork, but they had failed to take £2500 in the glove compartment, his phone on the passenger seat or the SatNav on the dashboard. After contacting the police he had to wait for another van to continue delivery for that day. Luckily we have his cards etc. covered by CPP. Again, ironically, that day Jamie had been informed by his boss that he was being promoted and will be taking over the Transport Managers job and so won’t be doing much driving. He will be having an office. I wonder if his boss has second sight? 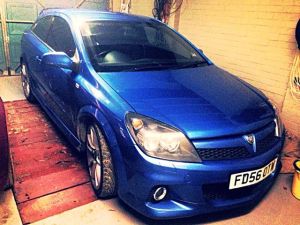