The following morning (Friday) we woke early and after showering walked a few hundred yards to a Macdonald’s for a strong cup of coffee/tea. A brief visit to a very large and impressive IKEA store followed before our return to the hotel and check out. We had booked a taxi for a noon pick-up and took our seats in the hotel foyer along with an increasing number of fellow cruisers. 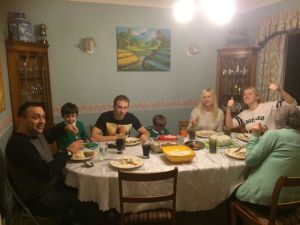 When the cats are away, see what the mice get up to!

Fortunately, our taxi arrived on time and we were blessed with an inciteful driver. Many of our fellow travellers were close to panic as the taxis they had booked had failed to turn up because of the horrendous traffic conditions in the city. The roads department had deemed fit to begin some extensive road upgrades around the port areas and today there were 5 Cruiser Liners in that were due to depart. The roads around our cluster of hotels were grid locked from the time we had woken up. Our driver refused all other offers and insisted on picking up his booked passengers, the Palmers. He then pointed out that because of the traffic he was taking a different route to the port, and as true as his word we wove our way along side streets and at intersecting traffic lights cut across the ribbons of stationary traffic on our journey to the dock. In less than 15 minutes the gentleman had earned himself a $5 tip and we were placing our suitcases on porter’s trolleys. By 1pm we had processed our way through immigration and were sitting in our cabin looking at a bottle of champagne. Resisting the temptation of the fizz we opted to stand on our balcony and marvel at the splendid view across the Solent. 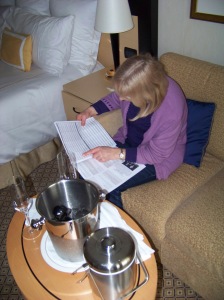 A little later we found one of the restaurants and settled down for a light lunch. Upon discovering the ice-cream bar I regressed into the bad habit picked up on previous trips and scoffed as much as I could comfortably fit into my stomach.

After returning to the cabin to unpack there followed the necessary walk along the decks to erode some of the calories that so recently been taken on. Not as glitzy a ship as the Favalosa, more refined, tasteful, English. Also the majority of guests are British 1200 of the 1900 passengers.

The evening meal was informal. On Cunard that meant that jackets could be worn without ties. After dressing appropriately, Sue and I queued at our designated restaurant with those other passengers who had been allocated the Britannia. On booking I had opted for a table of six so that we could meet a few other guests and have some conversation. A couple from the north-east joined us but the other two seats remained empty. We got on well and pleasantly swapped stories of family and holidays until the meal was complete and we went our separate ways in search of the rest of the evening’s entertainment.

Just before 8pm we returned to our cabin and Sue put on her raincoat (wish I had) and made our way onto Deck 10. It was the Queen Mary 2’s 10th birthday and she was berthed behind us. To celebrate this occasion and the start of the Queen Elizabeth’s world cruise there was to be a fireworks display. It wasn’t raining when we got on deck but 5 minutes before the display began it tipped it down. I lasted until I started to dissolve then made my way back to the cabin to dry out. On reaching the cabin I discovered that the best view of the fireworks was from the balconies on our side of the ship, so out came the camera again (after drying the lens) and from the shelter of our private box I watched what must have been a 15 minute spectacular to patriotic music. By the time Sue joined me in the cabin I had changed and was keen to discover the rest of the ship. 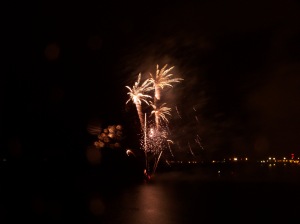 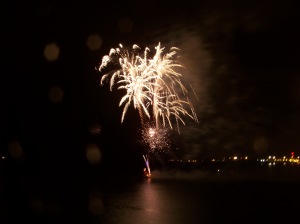 Sue and I wandered through the shops. We sat briefly to watch some ballroom dancing then found our seats in the main theatre for that nights show. It turned out to be a review of what was going to be on during the coming evenings. As this is a 4 month world cruise, I guess we will not be seeing much of it as we shall be disembarking in New York.

After the show we found our way to our cabin and opened the champagne. Then we discovered what can simply be described as the best pillows in the world. Warm, soft, comfortable and sleep inducing zzzzzzzzzzzzzzzzzzzzzz!