Favalosa Eighteen
We had a relatively late break fast as we were not due to dock into Barcelona until after 1pm. Afterwards we had a good walk around the decks, but though the skies were still cloudless, there was a chill wind that made my walk in shorts and t-shirt a little bracing. When we stopped for coffee in one of the restaurants we came across our dinner partners and sat and chatted. We were all going ashore but not on an excursion (we have all been to Barcelona before). We decided to pair up with Jonathan and his mum and use the shuttle bus to the Centre.

The rest of the morning was spent (after I had changed into trousers and jumper) on the top deck under neath the funnel. It was an excellent spot out of the wind and gave us a great view of our entry into the port, we had it to ourselves as the other passengers preferred to stay inside behind glass.

As we were disembarking we had a relatively early lunch. I pigged out on the sea food with cuttlefish stew, paella and a huge plateful of mussels (if I fall overboard, I should float).

We met Jonathan and his mum on Deck 8 and left the ship with them. Costa have their own terminal so the process of leaving the ship was very quick. We caught the bus into the Centre of Barcelona, the journey only took a few minutes. Once there we found Rambla Street (where a lot of the shops are) and ambled up looking at the street artists and shops. We spent half an hour perusing the market, Sue bought a coconut and I had a coconut and pineapple fresh crush. We walked the full length of the street and then returned via the back streets for the bus pick-up.
On boarding we had the obligatory coffee. It was quite welcome as though the afternoon had been warm, later on it had started to get chilly and we were in need of some heat inside (having watched the TV and observed the snow that the UK was suffering, staying on board for another week or so might be an option). 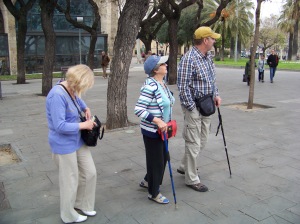 The evening meal was pleasant and the waiters once again lit candles and sang. Some of the singing we have heard during our trip has been exceptionally good, particularly the classical opera.

The evening entertainment was a French juggler. Quite amusing but being French he dropped too many balls and as with his country in the past, he relied on the other nationalities in the audience to pick them up for him. It was enjoyable but not great. 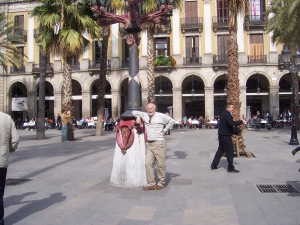 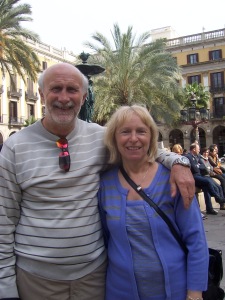 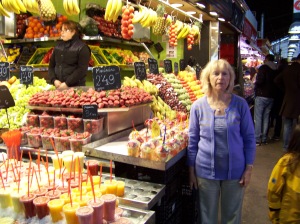