Favalosa Thirteen
Land sighted! Boats, dolphins and birds all witnessed during an early breakfast (7.45 am).
By sheer luck the captain has found St. Cruz de Tenerife before we ran out of food and water. We had booked an excursion, hence the early breakfast.

We were docked by 8a m and disembarked onto a coach waiting on the quay by 9.30 am. As usual there were many coaches, all taking different routes to as many locations. Having never been to Tenerife and had both good and bad reports on the island we decided to see as much as possible and make our own minds up.

As usual we were grouped together with German passengers, though the guide spoke mostly in German and only in English as an after thought. Surprisingly it was the Japanese in the group that complained about this. We Brits prefer sitting smug with that WW1&2 look that says; you might have a better economy and a prettier Chancellor, but in the game without a ball it is STILL 2:0!

We first visited a pretty Canarian town/valley called Oratava which is famous for its houses with many balconies, after photos we had an opportunity to wander and did so. From there we went to Pueblochico which is where you find an open air museum and miniature town underneath the foreboding Teide Volcano. Quite a touristy place to visit, but the town had been planned and built to a meticulous accuracy and so was worth the effort to see it all. They gave us free drinks and some small nibbles, but why people scoffed them down I cannot fathom as we would all have just had a hearty breakfast and within an hour or so would be returning to gorge ourselves back on the ship. 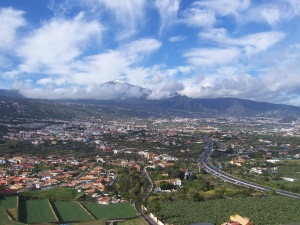 Our final destination was Puerto De La Cruz, which is the main tourist center on the island. We had around 3/4 of an hour to wander around. For the height of the season it didn’t seem too busy, it had a peacefully tranquil air to the place. No glaring billboards or blaring sound systems. Tastefully planned and tidy streets, with tourists dressed appropriately (no barechested bulldogs swigging cans of lager). Despite the complete absence of a beach and a huge outdoor pool complex to compensate, I can see why it appeals to many. Would I return and holiday there? I might, for a short time, but I would rent a car and see the rest of the island. 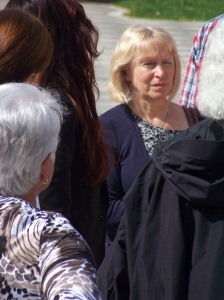 On our return to the ship, we had lunch. The specialty today was Spanish cuisine, so we had paella. I thought it was rather very good, but Sue mentioned that I made better (praise indeed). Afterwards Sue had a migraine (I think the cause a rather iffy paella) and slept until the evening meal. For once I sat on deck, watched the boats in the harbour and read my book.

During dinner Sue still had her migraine which wasn’t helped by the waiters again performing a martial arts dance with loud music. Instead of watching the show, we retired to the cabin for darkness, silence and an early night.