Favalosa Eight
The clocks went forward last night and though we were in breakfast I still felt tired (it is hard work putting on weight). Tonight is Carnival on the ship, so at 10 am we made our way to a mask making class on Deck 10. They provided blank masks, paintbrushes, water and blobs of acrylic paint, we were left to our own creative genius, or in the case of Sue and I, idiosyncrasies! We were pleased with the results, though I am sure if we were still teaching they would have been placed on the ‘tries hard, but has little talent’ pile. As we were creating, there was a very short but intense shower. We were under cover but those in the pools and spas on the same deck, for some strange reason got out and ran for cover. Water IS wet isn’t it? There’s nowt so strange as folk! After the downpour the sun came out and normal service resumed.

At 11.54am the ship crossed the Equator, most passengers had congregated on Decks 9, 10 and 11 for the ‘Crossing of the Line’ ceremony. Everyone held hands, did silly things and sang something in Italian. Lots of glittery things shot into the air and Neptune and his missus said some words (again in Italian). Afterwards there was impromptu dancing and canapes. Afterwards Sue and I found a quiet place and read our books (we both finished them). Later that evening in the cabin we found that we had been awarded a certificate for crossing the Equator (it will look great on my CV). 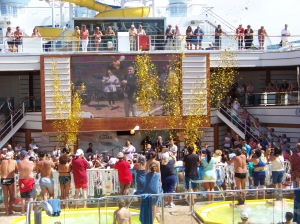 After Sue had visited the on-board library to replenish her book supply we found our way to the restaurant for lunch. We returned later in the afternoon for coffee and I had some more paninis and ice-cream. As I was watching the endless blue horizon I saw some breaking waves on what was a calm sea. On closer examination the waves were a pod of some dozen dolphins leaping out of the water, they kept pace with the ship then headed away out to sea before disappearing out of sight. Later Sue went to a Pilates lesson, she then sat on deck and watched an Albatross circle the ship before moving up to Deck 11 and joining the throng, who were circling the top deck on a sunset walk. I rested in the cabin and watched TV.

The evening meal was punctuated by some of the waiters doing a Bollywood dance routine, our own waiter was encouraged to show us what he could do and he promptly balanced two forks on a tooth pick, then made a bird from someone’s bill.

There was no show this evening so we sat in one of the bars and watched the dancers gyrating to music of the 40’s and 50’s. There was plenty of scope for conversation, mostly on large single Italian men and women, picking out the young dance crew and using it as an excuse to grope them. Highly amusing for the onlookers but the poor crew had to smile, grit their teeth and bear it. Great fun.

Late in the evening we attended the Carnival itself in the main bar and dance stage. It started with a brief procession of children dressed as pirates and the entertainment crew dressed as fairytale characters. What followed next was a walk on and and dance around the dance floor by all those that had made masks during the day. Being British and naturally reserved our masks stayed firmly in Sue’s handbag. Afterwards the masks were judged by the audience, I personally felt confident that the ours in Sue’s hand bag would have attracted an OFSTED ‘Overall Satisfactory’ judgement, with (Outstanding Special Needs’.