Favalosa Four
The ship had docked in Salvatore (the old capital of Brazil) by 6.30 am this morning. We had risen early, had breakfast by by 7.30 am and were leaving the ship for a wander around the town by 9 am.

At the bottom of the gang plank the Brazilian film drew were hard at filming an episosde that appeared to incorporate the dancers from the previous evening’s show. They kept ushering the passengers out of range of the cameras as they departed. I tried my best, but they were wise to my ploys and ushered me away too! As we walked down the street, a very nice young Brazilian lady tugged my arm. I knew my luck wasn’t in as Sue was just a few steps behind me. The girl pointed at the camera I was holding and gestured for me to put it away. I took her advice and did so. 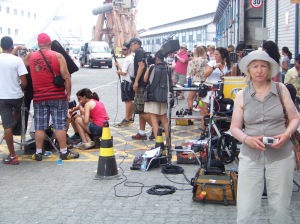 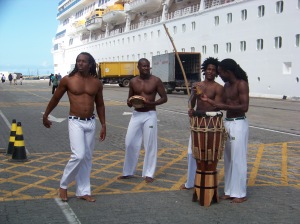 We walked to an open air market and had a look at the various trinkets for sale. The city is perched on top a of a steep and high escarpment and luckily I spotted a lift. 15 cents later and sweatless, we were at the top. Around a quite magnificent square was a great many old buildings. We found a museum that was air-conditioned and had slavery as its theme. For once it was the Spanish and Portuguese who were the culprits and not the British. After taking a few photos we left refreshed and feeling virtuous. 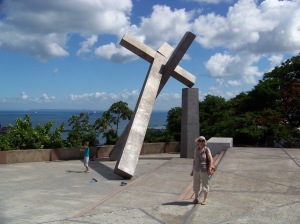 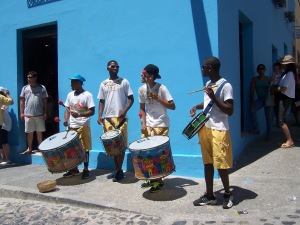 There were a great many military police around. One on each street corner, and others wandering about.

We next visited the Cathedral Basilica. Very large and impressive building, in one of the rooms there were paintings on the roof of past priests. One painting had an unfortunate gentleman with a sword through his neck. I am not sure that is how I would like to be remembered down through the ages.

We wandered through the very pretty streets photographing the buildings and locals and the heat of the day began to build. The cobbled streets reflected the furnace quite effectively. After visiting a few more shops, buying a couple of paintings that we firmly said that we would not do, we decided to return to the ship. Our journey was a direct one. Unfortunately, it took us through a rather seedy and poor neighborhood. Clutching our belongings tightly to our bodies we marched purposefully through the streets. In no time at all we were back in the shadow of the Favalosa, and safe. 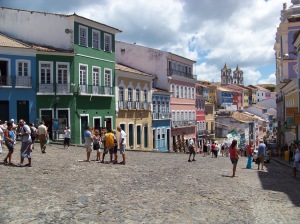 On the elevator back to our cabin we met an English couple who inquired if we had been outside. She told us that she had just returned from the ship’s hospital as she had her necklace ripped from her neck whilst in the city, it had left a nasty mark. I thank the lady who had warned me earlier in the day. In the past I must admit to having a cavalier attitude to my own safety, I was of the attitude that, “If I have it and you want it, try it, and see what happens!”, perhaps at the age of 60 yrs I should now be taking the advice of Sue and those wiser than myself.

As we were rather hot and thirsty, we ensconced ourselves in one of the restaurants and drank copious amounts of fruit juice followed by several bowls of vanilla then strawberry ice cream. Sue then went to find a quiet little spot on the deck and read her book, I had rest.

Later in the evening we met our usual dining couples and had a pleasant meal. At one point 5 of the oriental waiters did a very amusing and skillful dance to the sound of some Kungfu music, it was excellent, but I suspect exhausting. I wondered how they would carry on with their duties after that. As always we were the last table to finish. The evenings entertainment was a celebration of South American dances. From the caballeros of Argentina (with boleros) to a Cuban tango. The Brazillian dances seemed similar to those that we saw during the Olympic closing ceremony. I didn’t understand what was going on then, and I didn’t this time. Very colourful, but give me a Morris Dance any day.