Today we are off on holiday. It is tipping it down outside, the river is up and it is cold.  As we have a few hours to kill before driving down to Heathrow I thought I would get up to date with the blog.

While Jamie was away in the sunshine, it rained every single day here. I manged to get out on my bike most days, but usually came back muddy, despite staying off the tracks that I knew would get sticky.  Sue and I were going on a Council walk yesterday, but it got cancelled as the paths were under water.  Due to the awful weather, not much happened while Jamie was away other than Sarah wrote a lot of assignments and emailed them onto me for reading. She is well ahead of schedule and even had a day off of revising for the exam she took last Monday. I believe she went swimming and spent 4 hours in the gym. Charlotte has also started to visit the gym, I think they call it ‘bums and tums’ sessions, she has also joined a rounders team, but they haven’t met for the last 2 weeks as the pitches are waterlogged. Today, Nan, Sarah and Lee are going out for Sunday lunch.

Last Tuesday evening was busy. I drove over to see Bridget as she was having a Grievance Procedure against her at work and she had asked me to represent her and I agreed to. The hearing was the following day so we chatted for around and hour so I could get up to speed on what the problem was. Afterwards I drover to Rothwell to see Suraj and the boys. I had a friends laptop to drop off that needed fixing and Suraj likes to do that sort of thing. I stayed for about half an hour then set off on the A14 to Stansted, to pick up Jamie and Harley. I made good time and the roads were clear. The flight was nearly half an hour early, so I didn’t have long to wait. They were tired but chatty on the way back and by all accounts they had a fun time. I dropped them off at Jamie’s just after midnight. 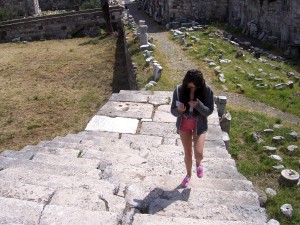 When I got home, as it was late I quietly sneaked into the bedroom to be surprised by Sue telling me that something was dripping on her. When we put the light on, the drips were coming from the ceiling (not good). Nothing could be done so a bucket was put underneath and off to sleep we went. The following day it was still raining so I couldn’t go on the roof. However in the loft I found where the rain was coming in. There was a little pond up there. I used towels to soak up most of the water and placed a bucket under the drip. Nothing else could be done until it stopped and the weatherman was predicting that to be June. That day I made a video of Jamie’s holiday photos and later in the evening we watched it.

On Wednesday morning I drove in a deluge into Leicester to attend Bridget’s Hearing. Sue had been called into Church Langton to do a mornings supply, that turned into a full day. The Hearing went well with several solutions found, the main one being that the aggrieved should do a bit of talking and discuss issues, before complaining. I came across a lot of that sort when I was teaching.

On Friday after Lucas had soccer practice, the Rothwells came over for Curry Night. It was decided that Suraj, Jamie and I would go and see the new Avengers film at the cinema in Kettering. Jamie drove us there and we caught the 8.30pm show. It was a super hero, hi-tech, shoot em up film, which required a lot of imagination, but had a nice sense of humour to it. It was enjoyable.

We woke up on Saturday and WASN’T raining! Sue had washing hanging out and put the ladder up to the roof. When I located the cracked tile, I searched around in the garage to find stuff to water proof it. It started to spot with rain. I found it and back up the ladder, slid down the roof to the chimney and spent 15 minutes frantically trying to seal the crack in the increasing drizzle. Job done I set off back up the roof to get to the ladder. The tiles were now too wet and every time I tried,  I slid down back to the chimney. I took my shoes off and tried in socks, and I got a little further, but still slid down. I put my shoes on and thought about plan B. After 5 minutes and increasing rain there wasn’t one. I was wet, cold, grubby and fed-up. Not wishing to panic Sue I rang Jannie. He picked up straight away (bless him). I quickly said I am stuck on the roof, I can’t get down, I need your help, come now. He said he was on the way and put the phone down. Fifteen minutes later, no Jamie. The rain was coming down quite hard now and the wind had got up. I rang him again. Despite living only half a mile away, he was going to get petrol (there’s logic there somewhere). I rang Sue. She came out but couldn’t do anything, so we waited. Jamie arrived. Within 5 minutes Jamie had arrived, climbed the ladder, threw a rope to me and I pulled myself up the roof. I thanked him because I know he doesn’t like heights and when he  arrived, he just shot up the ladder, but coming down again was difficult for him. I got changed into dry clothes and later in the afternoon went to watch Leicestershire beat Essex in a county game at the club. A good game.

The wind is howling outside, rain is running down the window and my fingers are cold. It’s 35 degrees in Malaysia.