While the UK was enjoying a record heat wave, we in Ritya were equally dry but always 3-4 degrees in temperature cooler. Now that the weather back home has turned, the same has happened here except the temperature has plummeted over the last 2 days to chilly and the rain fall has been steady and heavy. It has meant that all work on the house has been moved inside and the Turkish wall builders have failed to turn  up. I guess that quite rightly they did not fancy get wet, muddy and cold for 25 Levs a days (about £11). Unfortunately, if they had turned up they would have been working inside sanding down ceiling beams, just goes to show that we Brits do have a heart (probably caused the demise of the British Empire).

As the rain fell I set about replacing the screen on David’s Sony Viao (he had broken it) and after a couple of hours it was up and running and I bagged it for my personal use while I am here. So I have personalised it with all the software I need to communicate with the outside world. Much easier now that I don’t have to peer at a tiny screen and  use the rather basic software package on a Netbook. Never though I would say it, but thank you Bill G for Microsoft Office.

We have set about the rooms downstairs again, the plaster has dried and the woodwork mostly stopped smelling of the obnoxious woodworm liquid they were sprayed with. The paint tin has been put to use (white masonry) and so far over the last 2 days one of the bedrooms (to be) and the toilet shower room have been painted. We finished at 4am yesterday and got up at 7.30am to let the Turkish builders in, but as already mentioned they didn’t turn up. At noon we drove through the pouring rain to Veliko Tarnovo to do some shopping. Last week as we popped down the road to get some beer to refurbish dwindling stocks we sat out side the supermarket talking to a Bulgarian neighbour of David’s and his friend when the road was shut off by the police and 20 minutes later the Brazilian President and a very large cavalcade of cars sped by on his way from Sofia to Veliko. I wondered whether we would meet him in Practika or Metro while we were getting provisions (disappointingly we didn’t).

First thing we costed a lot of drainage pipes for the garden, but didn’t buy as we were only window shopping. David says he doesn’t know hardly any Bulgarian, yet he has enough vocabulary to make himself understood no matter what the subject. Next, at Practika we bought manly things, such as wood worm treatment, stain, cutting tools and other things that wouldn’t have looked out-of-place in Sarah Beeny’s tool cabinet. We moved on to Metro and the more feminine purchases of cheese, yoghurt, beans, chicken etc. (wouldn’t have been out-of-place in Gordon Ramsay’s basket), to ensure that the checkout girl didn’t get the wrong idea of two fellas shopping together, we topped the trolley with a lump hammer and 12 x 2.5 litre bottles of beer (‘nough said). The quantity of beer was excessive but no doubt we will be manly. We drove back through the rain and forgot to call in (as planned) to see Ali in the Turkish sector of Dryanovo to tell him to turn up tomorrow. We will find out tomorrow. The annoying thing is that there are no clocks in the house and David lost his mobile phone the first week I was here, so he relies on the alarm on my phone to wake him up. That means when my alarm goes off (at 7.30am) I ring a bell at the side of my bed to wake him up, but mostly I have to get up and call him. He then goes downstairs to open the garden door so the Turks can get in at 8am. But of course it means that I am awake and don’t have a chance of a lie in!

Not mentioned the Rugby yet. I feel lucky that I am in one of the remotest places on Earth and don’t have access to live TV showing the World Cup. I had set up the Sony Viao (great sound system) to stream the match through Tunein (internet radio site). I had listened to the Welsh stuffing the Irish and with half an hour to go to the BIG match I decided to release some of the pent-up adrenalin by felling half a dozen trees or so in the field outside. I returned exactly as the match kicked off, now relaxed and ready to enjoy the French getting their comeuppance. After two penalties and a French try I picked up the chain saw again and passed David on my way to the field. He inquired as to what was happening in the match, when I didn’t reply he pushed the matter no further (you don’t  risk annoying someone with a chainsaw in their hands who doesn’t wish to speak). I felled a dozen more trees and returned just in time for the second half to kick-off. Dismayed to learn that another try had been scored and it wasn’t English I visited the loo, I took my time. On my return, WE SCORED! I listened expectantly, anticipating that we might do what we did to the Argentinians (get lucky). With a couple of minutes to go I picked up the chainsaw again. David didn’t even look up from the strimming he was involved in when I passed him (wise). After checking out the number of trees left down the side of the field (I was sure quite a few had legged it in the interim) I set about releasing some stress.  Later, sweaty and knackered I switched off the saw and sat down on a felled tree to recover. My mobile burst into life with incoming text. It was from Jim, currently enjoying the sun in Cyprus and of course had just watched the game in a Cypriot bar. It said, “England Lost, will have to support Wales now.” That bloody text cost me 50p to receive!!!!!!!!!! Good job he was around 1500 miles away or Brigitte would be married to one legless husband now. 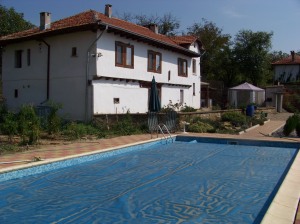 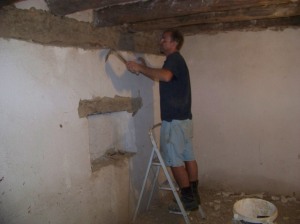 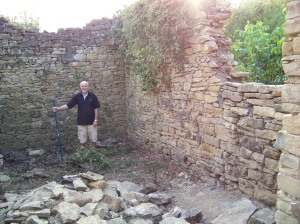