Today I finished digging the allotments. The last section was tough as it was over run with mint (that behaves like couch-grass, snaps if you so much as look at it) and I think/hope I got most of it out. I positioned the small shed at one of the allotments to a more convenient location and I erected the one that was transported from Newark at the other. I feel chuffed with myself as it has been a long, hard and interrupted slog. All I have to do now is plant things. I have already ordered some potatoes and artichoke for the spring.

Last Saturday I refereed up in Loughborough. If Charlotte was till living in Newark I would have gone over there for the evening, after the match. But they don’t and I didn’t. I travelled back to Harborough and arrived just in time to see Sue and Charlotte leave to go to the Film Club to watch a film (it wouldn’t appeal to me they said). I watched an episode of ‘Lost in Space’ on my media centre in the lounge with a bottle of beer and a bag of peanuts. Sarah was revising in her room.

I popped around to see Roger last Friday. Charlotte had come over to have a Reflexology session with Doreen (next door neighbour).  Afterwards she had Thai Green Curry with us (one of my best efforts to date) and Suraj was supposed to pick her and the kids and take them home. However, he had been in London supporting his sister who was at a court hearing, over custody of her son. His car broke down on the way back. The AA did fix it (when they eventually turned up), and he arrived home a few minutes before I arrived with Charlotte. As I was driving home through Braybrook I decided to have a coffee at Roger’s.  His sister had arrived that day,  after travelling on the bus from Bristol.  It had taken her 10 hours and she soon fell asleep on the settee. It transpires that romance had entered into Roger’s life. He met a woman from Sheffield while on holiday in Cyprus. They were every keen on each other, but Roger (true to form) managed to muddy the waters and she now doesn’t ring. I gave him some firm Yorkshire advice. We shall see if he acts on it.

Sue took Brigitte over to See Charlotte’s house last Friday. Brigitte enjoyed the chance to get out and I believed didn’t stop talking all the time they were there.

Sarah has sat two exams. Her Sociology went well but today she took Geography. She wasn’t well yesterday and woke up feeling sick, during the exam she threw up a couple of times, and again when I brought her home afterwards. She is complaining of coldness and aches. Not the best of luck but she did complete the exam, so we will have to wait and see how it affected her. Friday is Psychology! As I revise with her each evening I do wish she had chosen something a little closer to the Biology, Chemistry and Physics that I took. I do find it hard. I count myself lucky I am not attending school today, it seems to be endless tests followed by exams covering a syllabus that seems to be degree based.

We are starting to see less of Jamie now. He doesn’t always want his tea here and he isn’t dropping by so often. I suppose he has started to enjoy his freedom. Apparently he had a party at his place the other night. Charlotte found out on Facebook. Handy informer is Facebook, Sue checks it regularly.

NEWSFLASH: Jamie sent a text that he is not well. I drove over to see what he was like. He was curled up on the floor shivering and feeling sick. He has the same as Sarah. I brought him back. The both of them are in the lounge wrapped in blankets, clutching a hot water bottle and facing a bucket (to catch the overspill!). At least WE won’t have any pooey nappies to change tonight (I hope). 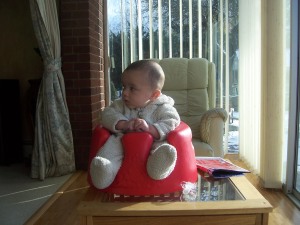