(25th June) Reykjavik
The Ambience eased into her berth in the port of Reykjavik a little after 6 am. It was a glorious, sunny morning, thin wispy clouds scudded high above grey mountains spattered white with the residue of winter. It felt like it was going to be a good day.
We breakfasted for 7 am before wandering the decks, taking in the scene around. Nothing much had changed from our last visit just a few months ago, we were the only cruise ship in port and the city on our starboard side seemed just as bright and pristine as ever. Seaward, the grey-green topography remained stark and inhospitable between a cold, rippled sea and an ice-blue sky. We couldn’t wait to dive into the metropolis and discover more of its delights.

A little after 8 am we disembarked, wearing fleeces, carrying rucksacks and cameras. We had chosen to walk into town rather than catch the shuttle bus, the route (we were told) was pretty and took around half an hour. From the port, we followed the shoreline along a tarmac path used by pedestrians, cyclists and the new form of human transport, the electric scooter. We looked in vain for promised whales and dolphins in the bay.

It wasn’t long before we left the shore and headed uphill towards the city’s iconic cathedral, its unique spire visible from horizon to horizon. We occasionally dipped into the myriad of tourist shops to gaze and consider but not to purchase. By the time we had reached our goal, fleeces had been discarded and sunglasses were firmly in situ.
The plaza in front of the building was thronged with nationalities mingling and enjoying the sun. The large, heavy wooden doors were firmly shut, but as Sue was reading the English poster declaring that they would be open at 10 am, they were opened. We were first in the queue for the tower and as a 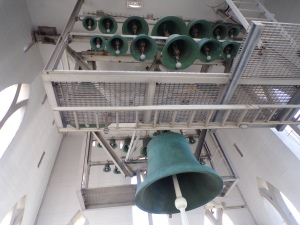 consequence, first into the lift to the top. On my first visit to this island with a party of rugby chums, we had visited the cathedral but had neglected to scale the tower, this was now remedied. The views from the top were exceptional, we were fortunate it was such a clear day, many are not. Fortunately, the large and impressive bells suspended overhead, were not due to be rung on a Saturday until midday, a few years ago Jamie and I were in a bell tower in Kyiv when the time struck twelve, it was a painful experience!

Back at ground level and inside we were fortunate to be entertained by a large American choir who were rehearsing for a concert that evening. They sang beautifully without a hint of a drawl or a yahoo! We stayed long enough to hear three examples from their repertoire and during the last one I video called Sarah back in the UK for her to share the moment.
Leaving the cathedral, we immersed ourselves in the pretty and colourful old town, photographing some of the more unusual buildings and enjoying its warmth and ambience. Eventually reaching the central lake we tried out the automatic toilet set within a small park, yet another bucket list experience ticked off! 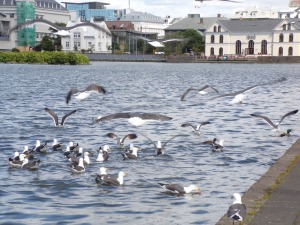 Sitting on a bench by the water we watched families feed the wildfowl with breakfast leftovers, we attempted to identify the various species scrabbling and squawking for the scraps. Thoughtfully the authorities had provided a series of pictures stuck to the handrails for such a diversion. We successfully managed to ‘clock’ every duck and gull on show, the ‘twitchers’ back on board would have been proud of us.
Circumnavigating the lake, we then took in a large model of the island within City Hall before plunging back into the surrounding maze of streets, finding benches in parks to sit on and interesting shops to peruse. We returned to the ship via the harbour front ‘glassy’ Library, once nearly the cause of the city to be bankrupt.
My right knee was now starting to complain and our return to the ship caused some discomfort, which somehow miraculously disappeared when we sat down for a very late lunch. I must have run out of calories in my right leg? 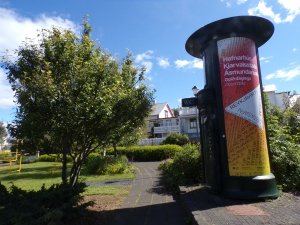 We spent the rest of the afternoon relaxing in the warmth of the sun at the stern of the ship until our latitude sucked the radiated heat away and we retired inside for coffee and aircon.
Leaving port late in the evening, a strong headwind caused the captain some difficulty in making progress and during dinner, it seemed as if we were at anchor. Even during showtime when we were entertained by a virtual Anton Du Beke and the ship’s dance team, passing waves seen through the portholes just crept on. However, on the plus side, it made for a vibration-free night and a very deep sleep. So deep in fact that during one vivid dream I sat bolt upright and hit my head on the folded bunk above, causing me to seek some tissue from the toilet to dab away the ensuing blood. Ouch! 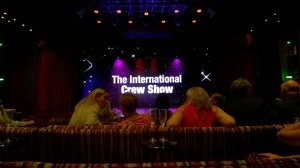 Though late for breakfast there were very few in the restaurant, probably yesterday’s activities and tours had taken it out of most and they had opted to skip the meal. The ship is around half full with around 850 passengers, the only queue we have joined so far was to be photographed, shaking the captain’s hand. Covid-19 may have had an impact on the numbers willing to cruise, but on board though, all crew and staff wear masks, and few passengers do. It is recommended that masks are worn in the theatre, but this is largely ignored. It was the same in Reykjavik, it was odd to see anyone in the streets wearing a mask, yet in the shops and museums, the staff did. 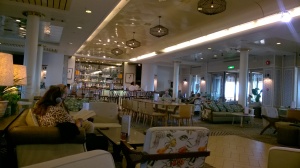 Today was another round of lectures, quizzes and healthy walks around the decks. The sea has been relatively calm and though we took the binoculars with us on each circumnavigation we saw no sea life spouting or leaping from the waves, just the usual terns skimming the waves, looking to snatch an unwary fish. There is always a constant gaggle of would-be naturalists clustered near the bow of the ship, resplendent with their military-grade binoculars and howitzer-sized cameras. They are willing to engage in conversation as long as it is centred on orcas, Sue avails herself regularly of this character flaw. White topped, rolling waves can often look uncannily like a Minky whale, especially if you want it to!
Andy Abraham was the act in tonight’s show, a fine soul singer from the X-Factor stable, represented the UK at Eurovision in 2008, he has come a long way from his dustman and Busdriver beginnings.