Bolearis docked quietly in Reykjavik around 6 am, it was a misty, drizzly morning, thick clouds obscured the mountains in the distance, not a nice start to the day. With breakfast stored internally and a carrier bag containing a packed lunch in hand, we disembarked the ship by 9 am and were climbing aboard the waiting tour bus, eager to see what this island had to offer.

Our tour, ‘The Golden Circle was the most popular on offer, the literature gave it a thumbs up as for covering the ‘must see’, attractions in this part of the island. Due to Covid-19 restrictions, our 72 seater coach had just 20 passengers, one tour guide and the driver. Masks were worn whilst in transit by all, though not by the driver, who ironically had a stinker of a cough and punctuated his driving with claps of Icelandic splutter. Our guide too was a native and spoke perfect English with a lovely Scandinavian lilt. 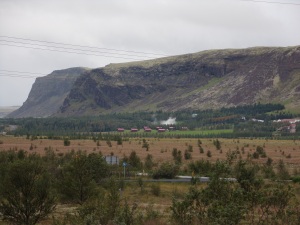 The first stop was for the all-important loo break around 40 minutes into the journey and just outside the capital, vital if you need to go, but annoying if you don’t! However, the rain had stopped and it was beginning to warm up. Moving on we passed over the lava fields of Mosfellsheioi, now a lot greener with moss, coarse grass and small shrubs than when first erupted from the bowels of a nearby volcano. By the time we had reached our first ‘proper’ destination, the mighty Gullfoss, the most famous of the country’s 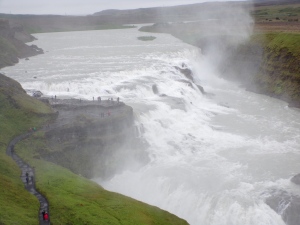 waterfalls and situated in the Thingvellir National Park, the weather Trolls had weaved their magic and it was turning into a pleasant day.  It is quite a distance from Reykjavik and we were glad to be able to stretch our legs. The Hvita River drops 30m into two falls and creates what can only be described as a 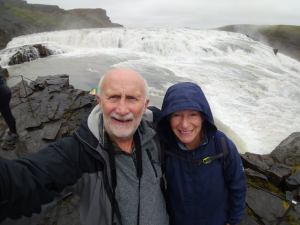 display of awesome power. After taking many photos from the top two platforms down onto the falls, and into the chasm in which its flow disappeared, we snaked our way down a narrow cinder path into the chasm itself. As we passed along the edge of the precipice, sheets of mist were thrown up into the air from the raging torrent below, forming a spectacular curtain of water that soaked any watchers on its descent. A rocky, fall drenched lower platform, situated directly in front of the 2nd waterfall was tricky to climb, but once achieved the real power of the  Gullfoss could be seen and felt, unforgettable, on a par with Niagara.

We moved on just a few kilometres to an area of geothermal activity. We were at Geysir, which lends its name to all other erupting spouts of scalding hot water throughout the world (geysers). Geysir once erupted regularly in the past, but over the last few decades has become erratic and is seemingly heading towards retirement. We had come to witness a much more regular

performer, that of Strokkur which belongs to the Haukadalur valley area, where various other geothermal features such as mud pools, fumaroles and other geysers are located. Because of its regularity, it didn’t take long to take many successful photos and videos of the spout from a variety of angles as it steamed 30/40m into the air. 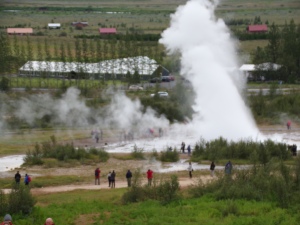 We had our ship supplied packed lunch just a few more kilometres down the road in a small pleasant roadside restaurant and bar. I supplemented my fayre with a pint of Icelandic Gull from the bar, paid for by my Covid-19 friendly ‘tap and go’ bank card, I look forward to finding out how much that cost on my return to the UK! 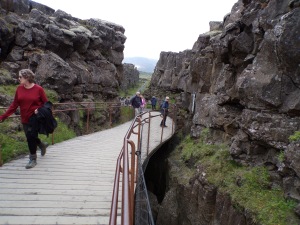 The next stop was where the two tectonic plates meet that created Iceland several millions of years ago, Pingvellir. It is where the Eurasian plate is moving away from the North American plate at a rate of 3cm a year and forms the Almannagja fault. I have seen this place many times on TV documentaries, it is a place I have always wanted to visit. It far surpassed my expectations. The surrounding area seen from any of its viewing platforms is stunningly beautiful, the lake, mountains and lava fields make a magical picture straight out of Lord of the Rings. We walked the fissure, soaking in the uniqueness of the place, it is the only place on the planet you can do this.

Our final visit was to a place I have been before, Perlan. It is a restaurant and viewing platform in Reykjavik that gives a panoramic view of the city. A much better experience is to be had if you can take your time, soak in the views and maybe have a meal, but this was a tour and not to be. However, worth the first experience, but this second visit was wasted on me. 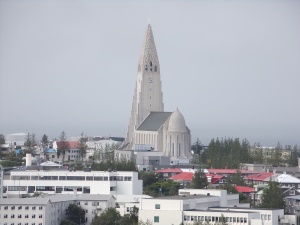 We were back on board for just after 6 pm. That evening we chose to eat in one of the specialist restaurants and had a very nice Goan meal.  Afterwards in the theatre, a highlight of what was a superb performance by the ship’s dance crew was their take-off off of Freddie Mercury and his skit with the vacuum cleaner, uproariously funny, I shall remember it for a long, long time.

18th Aug. Dynjandi Waterfall and back.

The ship arrived in  Ísafjörður (capital of the region) by 6.30 am and after a later breakfast than yesterday, we were on the road by 10 am heading towards Dynjandi (also known as Fjallfoss) and a series of waterfalls located in the Westfjords. Today the Bolearis was anchored near the end of the fjord, hemmed in on three sides by towering, craggy, scree-covered mountains and on the outskirts of this important but rather small settlement.

Our coach first drove through the town which appeared to be a thin mixture of business premises punctuated with modern, similarly built dwellings, white being the paint of choice for decoration. Reaching the tip of the fjord, we climbed steeply through verdant grassy meadows, spotting the odd group of sheep seen munching the short tufts on offer. The landscape is rather impressive, everything is vast and bleak with the occasional topping of pristine white. The crazy verticals of the striated mountains are coated in dull grey scree, sliced apart by deep gullies every 100m or so. Today they appeared dry, dark and boulder-strewn, an alleyway for dislodged rocks from above.  In spring they would be gushing with water from snowy heights, tumbling yet more rock onto the shores of fjord and valley. Not a place to be standing in. 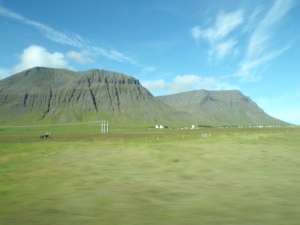 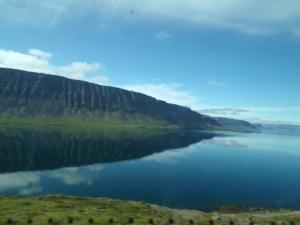 We drove through two tunnels on the 1.5-hour journey to the falls, both over 5km long. Like the Norwegians, it appears the Icelanders know how to dig and they have certainly put my admiration of our Mersey version firmly in its place! We skirted several other fjords on the route, passing by several even smaller settlements than their capital, of which we were informed that most of these inhabitants worked in the metropolis of Ísafjörður. Really?

Popping out of the last of the tunnels we descended steeply to sea level where we could see for the first time the cascade of water called Dynjandi, tipping over the skyline and smashing 100m down the precipice through 6 further and shorter falls. The 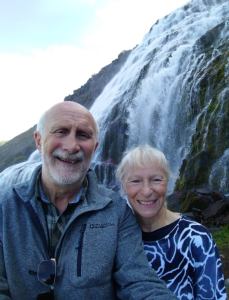 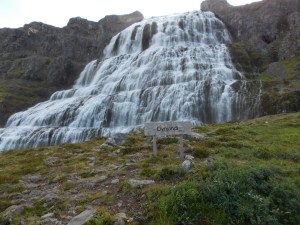 Icelandic term dynjandi means thunderous or resounding and it is a perfect name for this torrent of falling water. Leaving the coach behind we eagerly set off on foot up the steepening slope towards the thunder. Up to the first platform viewing point, the path was a well-constructed affair, but after that, it gradually deteriorated into quite a slippy and dangerous scramble. I feared that not everyone in our party would reach this point. Making your way to the base of Dynjandi was pretty special, the sound, the vibration, the rainbows playing in the mist, the sheer power of falling water, yet it is nearly equalled by the view into the fjord,  its ring of mountains marching into the distance, but not quite. They have a lot of giants in Icelandic Lore, I can understand why.

I lost count of how many photos and videos I took, everywhere you looked there was a shot, I just hope that on review some of them will do the place justice. On the way up I had stopped briefly to pick a few large and delicious cloudberries, spotted growing in abundance just off the path, on the way down Sue and I swooped on this free natural resource and scoffed handfuls of the purple berries, much to the puzzlement of our fellow travellers. It was their loss, all they had to do was ask and they too could have shared in this bounty. 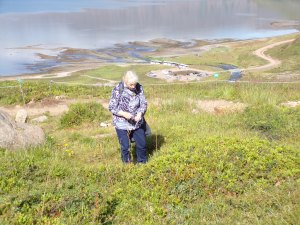 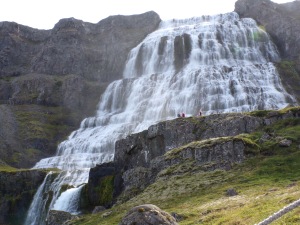 Returning to the coach we sat waiting to leave with our fellow passengers. Our two very young guides had counted the numbers and we were one short. Fifteen minutes past departure time arrived and panic appeared to set in. Where was the missing Rosemary Blossom? The lad set off up to the waterfall to find her, the girl scoured the toilet block and surround, but to no avail. Half an hour passed by and the girl rang the three other coaches to see if the lady had got on one of those, apparently not. The coach driver joined the search and still no Rosemary. When the girl returned it was suggested by we passengers that she do another headcount with names, which she did. Yes, Mrs blossom had been sitting on the couch alongside her husband all the time. I think the two young-uns will remember their first tour of the season for quite a while.

We arrived late back at the ship and thoughtfully they had kept the restaurant open for us, it wouldn’t do to break the most sacrosanct rule of cruising, “Feed your cruisers well and they will be happy”. It worked. 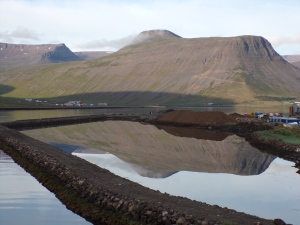 Because of Covid-19 we are unfortunately not allowed off the ship, only on a tour, usually, during the afternoon Sue and I would take a walk into the port and spread a little goodwill and cash among the locals, but it was not to be. Instead, we played bingo an board and Sue won a full house, the prize being a goody bag of Fred Olson gifts. We spent the rest of the afternoon on deck watching the sea life during our departure from Ísafjörður.

The evening began very pleasantly, with warm sunshine and terrific scenery as we emerged from the fjord before heading north along the coast. The ornithologists on board had been looking forward to the next leg of our journey as we were to pass by Hornstrandir King & Queen Cliffs, a nature reserve for birds renowned for its natural beauty and remoteness. We were due to pass under these cliffs at 7 pm, an expert was to give a running commentary over the PA system of the wildlife to be seen. Sue and I were on deck for 7.15 pm just in time to witness a thick fog bankroll in, obscuring all visibility down to 50m or less, it was to remain for the rest of the evening! Undeterred and with a sense of humour the expert from Kent gave his prepared commentary on what we would have been seeing. These things do happen. We considered ourselves lucky to be here, shrugged our shoulders and went for our evening meal and followed it up with an amusing comedy show by a gentleman from South Yorkshire. The birds of Hornstrandir will have to wait to be admired another time. 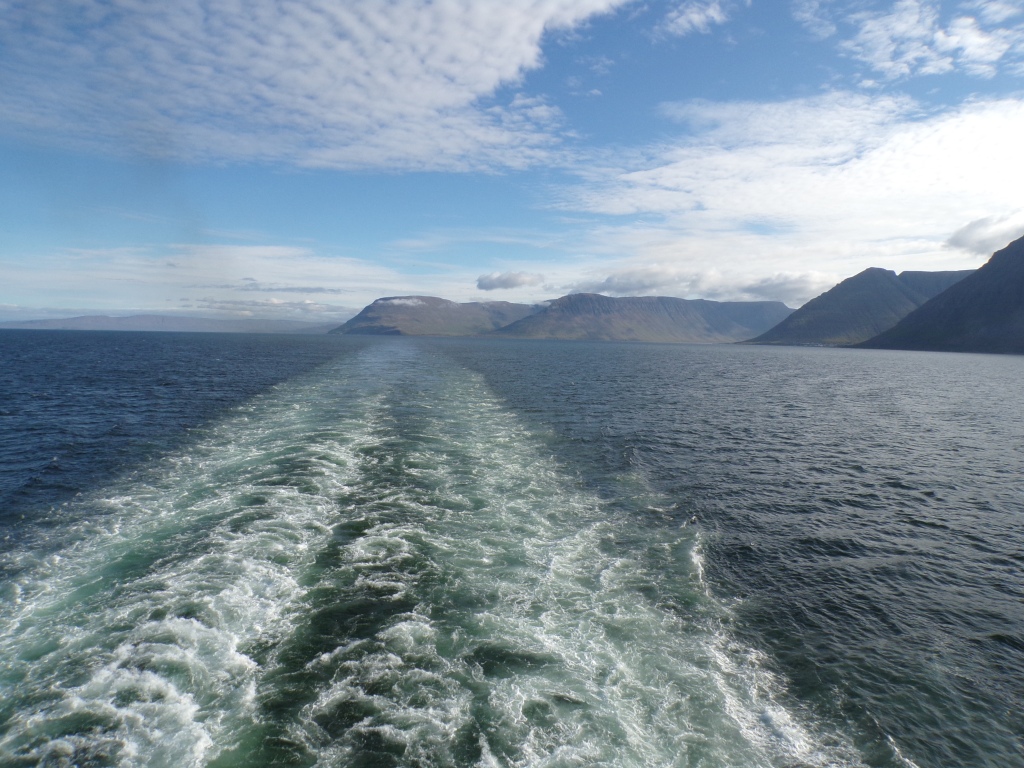