We woke to snow flurries and a chilly wind. During the morning Sue was expecting to play Petanque with her U3A group, but thankfully it was cancelled. During the afternoon she went to visit Doreen in her flat, she had been having trouble with smells emanating from the drains in the bathroom and wanted Sue to confirm that it was coming from the shared drains. It was!

On Monday mornings I usually pick up Peter’s mail during my cycle ride; I then scan it and send it off to New Zealand using Messenger for him to respond to. Today, looking through the window I noticed that someone had cleaned and tidied his flat, I wondered if he is giving it up, and has decided not to return to the UK when Covid permits?

06/04/21 UK Deaths: 20. Harborough Infected: 123. The new Valneva Covid-19 vaccine which is set to be manufactured in the UK has produced “fantastic” results in trials. The vaccine was “highly immunogenic with more than 90 per cent of all study participants developing significant levels of antibodies”.

How do you take the bins in?

After yesterdays disappointment, Sue joined one of her U3A rambling groups and had an excellent morning amble from Middleton. Though sunny, it was bitterly cold as testified when I had to break the ice on the water butt to satisfy the emerging broad beans. During the afternoon, as I was potting on some Cape Gooseberries in the warmth of the greenhouse, Charlotte called in to see her parents with the news that after the weekend viewing of their house, out of five views, three have made offers. Later,  Harborough was subjected to a return of winter with a blizzard and white-out conditions. Not surprisingly the grapes are not showing any sign of leaving dormancy, I guess they have learnt their lesson from last year’s devastating late frost.

07/04/21 UK Deaths: 45. Harborough Infected: 111. Britons aged 18-29 will be offered an alternative to the Oxford-AstraZeneca vaccine after 79 people developed blood clots within days of getting the jab. The first dose of the Moderna Covid vaccine was given to a 24-year-old in Wales. Brazil registered more than 4,000 Covid-19 deaths in 24 hours for the first time.

Another chilly day and another ramble for Sue. A short tramp up Farndon Hill with a small group of hardy hikers was an excellent way to spend a chilly afternoon. I again preferred the protection of the greenhouse and potting on those plants whose roots were ready for a change of home.

In readiness for her return to work next week (after extended maternity leave), Sarah took Alice to the child-minder for three hours. It seems Alice enjoyed the company and loved the novelty of playing with other children. Sadly, as a Covid baby, she hasn’t had the same opportunity to play with other children as those born in more normal times.

08/04/21 UK Deaths: 53. Harborough Infected: 96. The Health Secretary said everyone should take a vaccine when their time comes, and the risk of experiencing a brain clot was the same as “taking a long-haul flight”.

On a much milder day, Sue joined her U3A nature group for a walk to see the flora and fauna around Middleton. Among the highlights was the early emergence of some bluebells, obviously oblivious to the recent arctic conditions!

I preferred the shelter of the greenhouse and sowed sweet corn into pots, despite next week’s forecast of a return to winter frosts. All this week I have been protecting the seeds already sown in the greenhouse, by lighting the paraffin heater overnight and covering my little cherubs with fleece. I have been backing this up by placing a large barrel (painted black) of water in the greenhouse, the theory being that during the day the water will absorb and store the sun’s heat and release it slowly overnight. On testing, it raises the temperature of the water by 20°C.

09/04/21 UK Deaths: 60. Harborough Infected: 79. The Prince of Edinburgh has died, age 99yrs. It is a shame he didn’t manage to make 100yrs. Philip was a complex character who came from a dysfunctional family and married into an equally flawed clan. Despite a privileged and at times cantankerous life, in his later years, he managed to support a lot of charities and is remembered by many throughout the world with fondness. 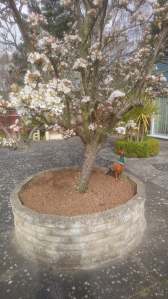 After a rather inconvenient lunchtime, a six-monthly check-up at the dentist, Sue and I then spent the afternoon re-modelling the circular walled flower bed around the pear tree. This involved digging up the overwintering plants, potting them up and covering the surface with pea-gravel. However, we didn’t have enough gravel or pots to relocate the plants. Earlier I had received a message from my friend Andy Spencer, he had four demi-johns which he had no further use for and offered them for free. So armed with a bottle of wine as an appropriate swap, I made my way to Desborough. I went via Braybrooke to see if Roger Woolnough had any spare plant pots, and luckily he had. My next stop was in Rothwell to pick up a tub of pea gravel from Charlotte, then it was off to Andy’s on my return route to Harborough. Unfortunately, I found him on crutches after having fallen on ice 10 weeks prior, he had broken his femur in two places and was now waiting for an operation to insert some metalwork. Demi-johns collected, it was raining as I arrived back at Willow Bank, so the gravel laying and potting on had to wait until after tea, when seemingly reluctantly the rain clouds had vanished to bother someone else.

During the early evening, we had a surprise visit by Jamie bearing two splendid jumbo artisan pies (lamb and beef), he was on his way to Ruth’s in Bottesford and had deviated on his journey to provide us with the victuals. What a lovely way to finish the day for a Yorkshire tyke! Lots of free booty and not a penny spent. 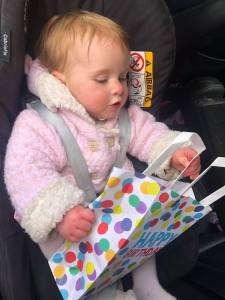 It is another Saturday, so another full day of Covid restrained TV rugby watching. Jim came to share a beer, natter about important issues such as; ‘Who should be in the upcoming Lion’s tour to South Africa’, and then watched the Tigers beat Newcastle Falcons.

Sarah took Alice to a birthday party for her friend’s 3-year-old. Earlier in the day, the family had driven to Nottingham to pick up a 3 man canoe for Suraj which he had bought online. At the same time, Suraj and Charlotte picked up some pea gravel (and other stuff) from a warehouse in Wellingborough to supplement Sue’s re-modelled pear tree flower bed. 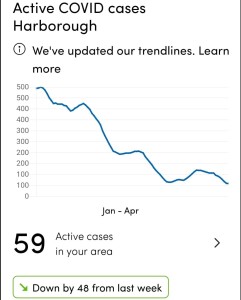 11/04/21 UK Deaths: 7. Harborough Infected: 59. Malta plans to offer foreign visitors a handout of up to 200 euros if they stay at least three days on the Mediterranean island this summer. The little island must surely be desperate for tourists to take such a risky strategy.

Just before 10 am I dropped Sue off on the outskirts of Harborough to join one of her U3A rambling groups, they were walking to  Great Bowden via Dingley and Sutton Basset. I then drove on to Rothwell to collect the pea gravel that Charlotte and her family had collected yesterday. Around

midday, I picked up a tired-looking Sue from Great Bowden.

In between snow and hailstone showers, during the afternoon I tinkered around in the garden and spent some time chatting to Ian and Val from next door,  I had potted up a Buddleia plant to attract butterflies into their garden for them.

Today, Sarah and Lee set about taking the roof off their patio in readiness for replacing it with a new, thicker covering.