01/02/21 UK Deaths: 406 Harborough Infected: 359. Residents in London and other parts of the UK will be offered urgent tests after more than 100 cases of the South African variant were detected.

Last night I was idling my time on my laptop, looking for interesting features in the local landscape using an on-line Ordinance Survey mapping App which I use for plotting routes on my Active20 GPS, when  I spied Sulby Abbey. I thought I knew the countryside around Harborough well, but this was one building I knew absolutely nothing of. After a quick internet search I discovered the abbey was founded around the year 1155 for canons of the Premonstratensian Order by William de Wideville.  I became even more intrigued when I discovered that Edward II in the early 1300’s had visited the place many times and used it as a royal lodging, but fascination really set in when I read further and found that Edward prevented the Abbey from paying their dues to the head Abbey of Prémontré and of the negotiations and threats that surrounded the affair. By the 1400’s, the antics of the Abbots, canons and novices and their punishments read like episodes from a naughty soap drama. The abbey was eventually dissolved in 1538, Cromwell learning of its demise by letter from the enforcer, ‘the papistical den of idle and utterly unlearned beasts at Soulbie’ was broken up‘. I had had my eyes opened to the reality of medieval  religious life and I determined to go and have a look at the place. And that’s what we did today. 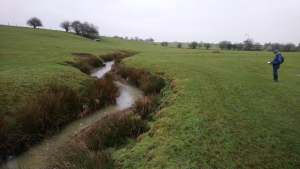 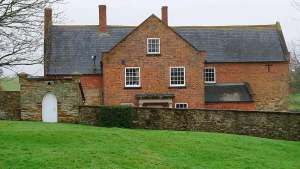 The path from the village of Welford to the Abbey follows the River Avon. At this point the river runs very close to its source and is usually not very substantial, however the rains of the last couple of months has made the surrounding land boggy and has ensured that the flow today is quite full. Wellingtons were very much the preferred wear. Despite the conditions, the walk through the small shallow valley towards the Abbey was delightful, passing several farmhouses seemingly tacked onto the slope just above the severe flood line and looking enviable places to sit out your twilight years. The Abbey, or what little is left of it, is now a working  farm but still very impressive in size and retains some identifiable remnants of it past. We would loved to have been invited in for a closer inspection, but these are not times to knock on doors and ingratiate oneself in hope of a spot of kindness, Covid has  seen to that.

Our onward route took us over the Avon and onto the opposite slope taking us above the Abbey from where we could see the considerable earthworks that constituted among other features ancient fishponds and a warren. Saying goodbye to what we thought was the last of our historical experience for the day we completed our walk through saturated fields and tracks without mishap.

On our drive home we passed by the monument to the Battle of Naseby, and decided to indulge in just a little more history.  I had first visited this site many years ago when fishing in nearby Naseby Reservoir, but it was a first for Sue. The two information boards set next to the monument, described the battle lines and skirmishes and were Heaven sent for Sue’s thirsty mind. It was easy to imagine both sets of troops arranged across the shallow dish of land spread out in front of us, and stimulated a lengthy conversation as we strove to identify who would have been where, and did they really have so many pike-men etc. etc. Sue’s  U3A History group (before Covid) had arranged a trip to see the battlefield and associated local sites, but of necessity had been cancelled, today’s impromptu visit clawed back a little normality. 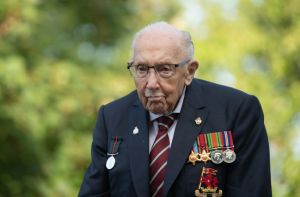 02/02/21 UK Deaths: 1449 Harborough Infected: 394. Sadly, the Queen has led tributes to Yorkshire man, Captain Sir Tom Moore after his death aged 100 after contracting corona-virus. He raised almost £33m for NHS charities by walking laps of his garden and was admitted to Bedford Hospital on Sunday. He had fulfilled a lifetime ambition by jetting off to Barbados shortly before he passed away on Tuesday, February 2. A hero in so many ways throughout his life. Scientists are concerned that the UK virus is mutating to acquire the same characteristics seen in the South African and Brazilian versions. This particular mutation changes the shape of the virus’ spike protein – which is responsible for gaining entry to human cells – in a way that makes it less recognisable to the body’s immune system and more resistant to the current generation of Covid vaccines.

03/02/21 UK Deaths: 1322 Harborough Infected: 523.  The nation came together this evening at 6pm to clap for Captain Sir Tom Moore and pay tribute to the veteran who dedicated his life to serving others. Ten million people across the UK have now had their first corona-virus jab.

After a couple of days stuck in the house and despite it being foggy, we decided to get out and have some fresh (if not damp) air. We opted to have a short circular ramble from the hamlet of Cranoe, taking in the deserted medieval village of Othorpe. 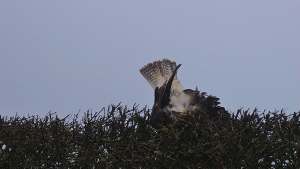 Parking by the cross roads, we had a short uphill walk through the tiny settlement, passing the 12th century church and Manor 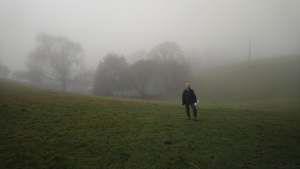 before heading off into extremely wet and undulating fields, following the Leicestershire Round long distance footpath towards Othorpe House. We made slow progress with increasingly claggy wellies, our route clinging to the steep side of the escarpment, with only rabbit holes and badger setts to raise our interest, distant views were greyed out by a fluctuating thick mist. Arriving at Othorpe House our trail took a sharp right, steeply down hill towards the Langton Road. Regrettably, the abandoned settlement we had come to see was in the field on the other side of the hedge, little could be seen of its bumps and hollows through a thickening fog. Finding a hawk skewered into the top of a freshly flailed hedge, we surmised that it had misjudged its dive whilst hunting a rabbit from the warren whose entrance was beneath. One of the sharpened twigs had pierced its breast, we hoped that death would have been instant. Lucky rabbit! 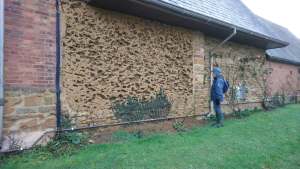 Leaving fields we followed the lane into the village of Slawston. Our route would have taken us left at the junction in the centre of the village, but nosy as ever and charmed by the variety and age of the buildings we continued through the village to All Saints church. As usual we checked out the headstones. I was 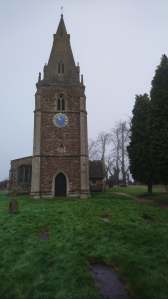 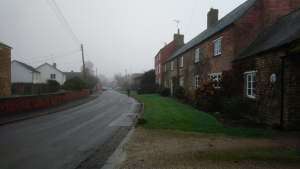 particularly fascinated by an epitaph to Ann Taylor (see photo, click to enlarge), I think she had a suitably macabre sense of humour. On leaving the village we stopped awhile to admire the wall of a house that had its wattle and daub facing preserved for posterity, only for it to be burrowed into by several thousand destructive masonry bees.

Heading down Welham Lane, which on any other day would have given superb views across the valley but not today, we turned right at the base of the hill to follow a small stream in full flood and a return to clag. We passed by a large number of metaled sheds which we thought were empty, but when asking a passing dog walker (the only one of the day) we discovered they were for pheasants, reared for the shoots. With the fog closing in again we found ourselves back at the car. We agreed it was a walk worth doing again in the summer months, according to the map, the views should be pretty good. We will have to wait and see. 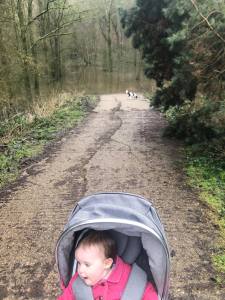 We weren’t the only ones walking in the family today, Mia had decided to take Sarah and Alice to meet a friend in Martinshaw Woods in the north of the county. It seems that there has been quite a lot of rain there too! 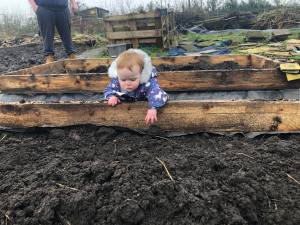 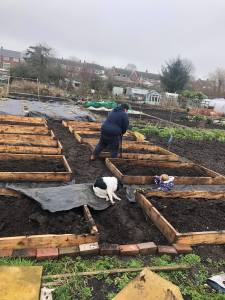 Today Charlotte dropped by with some more ‘lock-down’ jigsaws for Sue to attempt and Sarah, Lee and and Alice spent the day digging in the allotment, preparing the ground for spring planting.  Jamie’ s business: Binary Destroyer, received a fabulous independent  market review, describing it as ‘The Best Tested Forex Indicator of 2021‘.

With a return to wintry conditions and more snow forecast for the weekend I dug out the chainsaw and added to the log pile. 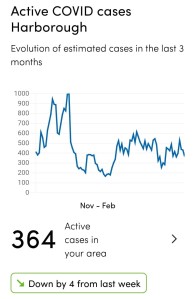 Scotland deservedly beat England 11:6 to take the Calcutta Cup and ended a 38-year wait for a win at Twickenham.