Exercise was something I never considered as a luxury to be looked forward to, in the past it has always been a necessity to keep fit in order to promote my enjoyment of sport. Under ‘Lock-down’ it has now become a vital element in preserving my sanity. After being ‘house-bound’ for several consecutive days, Sue and I took a short drive to East Langton to indulge in a short walk and attempt to maintain some vestige of rationality.

Parking up next to The Bell, we slipped on the obligatory wellies and set off on a short circuit around the village. Having taught at the nearby Church Langton Primary school, Sue knew the occupants of a few of the houses we passed by, it triggered fond memories of busier days and happier times. We exited the village by way of the Leicestershire Round long distance footpath,  passing through several very muddy ‘kissing gates‘ to cross a series of enclosed grassy fields towards the

village of Thorpe Langton and the church of St. Leonard’s. Fresh from the morning frost the air was crystal clear and the route gave as great views towards the northern edge of Harborough. We were surprised to spot two large fields of solar panels running alongside the Leicester to London train line, they seemed well hidden from any aspect other than where we now stood, we wondered how long they have been there.

Arriving at the late 13th and early 14th century St. Leonard’s church, we wandered through its higgledy-piggledy graveyard, eventually discovering the headstone of one unfortunate farmer who we remembered as being tragically killed in a tractor accident at the youthful age of 30yrs, leaving a wife and two children, both of which Sue had taught. Leaving the burial ground we searched in vain for a Geocache, supposedly located near to its entrance. After many fruitless minutes we satisfied ourselves that it had been muggled and moved on into the village and enjoyed success by finding a ‘micro’ skillfully hidden opposite the locked-down Bakers Arms gastro pub.

In Newbold Verdon, Sarah and family had a busy day in the allotment preparing for the spring. Four raised beds were constructed and a frame for the summer crop of runner beans built. I expect when the warmer weather arrives, little Alice will become very familiar with this little plot of Leicestershire soil.

since pandemic began. The U.S. death toll from the corona-virus eclipsed 400,000 on Tuesday.

With storm Christoph predicted to hit the UK over the next few days, here in Harborough we had a warm and pleasant day. I didn’t at all miss the frozen fingers of the previous week’s morning cycle rides. The wood-burner in the lounge wasn’t lit until nearly 4pm!!!

As a key worker in the NHS, Suraj had his (first) Pfizer  vaccine injection today. He will receive his booster injection in around 12 weeks, rather than the contested 3 week recommendation.

Joe Biden became the 46th president of the United States after taking his oath of office in Washington DC. Having watched his inauguration on the TV, I thought it a dignified and conciliatory performance as he swore to preserve, protect and defend America. His call for unity and optimism is in direct contrast to the divisiveness and self interest of his predecessor. No doubt the ‘free world’ sincerely hopes that; “Democracy has prevailed,” the new president said on Wednesday, adding that the US has learned a “painful lesson” about the fragility of its governmental system since Election Day last November. And so do we!

Early morning we had a brief visit by Jim and Bridget, they had driven to Harborough to check on the alterations to their home, a medical appointment for Jim and an operation at the vets for Shoby. They kindly brought with them a box of bread from Jim’s baker brother, who they are temporarily staying with.

In the UK, Sarah made a fleeting visit to see her sister in Rothwell. Sue and I completed a couple of tasks that we have been focusing on over the past week; I have been collecting together all the photos published in these blogs, from the start of the pandemic in March to the final days of 2020, I am incorporating them into a video of memories. As we approach the anniversary of the first lock-down, I find it inconceivable that I will be creating a sequel for 2021, but it is looking that way. While I have been copying and pasting, Sue has been quietly busy identifying and adding a large pile of postage stamps to her albums. Family friend Linda Keene, had collected the stamps as a child and rather than throw them away, she has given them to Sue. Sue is using an app on her phone to identify their origins. 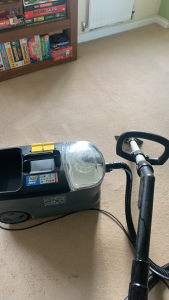 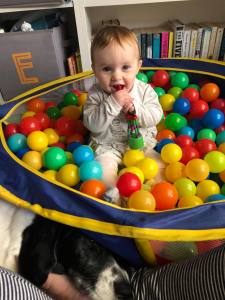 Senator Mitt Romney has called for constitutional reforms in the presidential power of clemency as he slammed former president Donald Trump for handing out pardons to friends and allies he termed as “cronies.”  The problem is not just Donald, all past presidents have done the same at the end of their term of office. You have to ask, why in a democracy where supreme power is vested in the people and exercised directly by them or their elected agents, it is acceptable (or lawful) that one person is able to negate the just process of law. Commuting a sentence after trial by jury or pardoning an individual from prosecution is surely anti-democratic and akin to medieval kingship?

On a slow pandemic day for the Palmers; Sue began sorting out letters and memorabilia left over from Uncle Stan’s estate, Charlotte started a week of carpet cleaning, Jamie drove up to Bolton to rescue a shipment of meat whose van had blown a tyre, Sarah spent the day playing with Alice and I turned over yet more rows of soil. 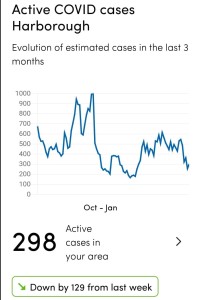 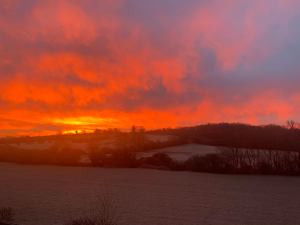 24/01/21 UK deaths: 610. Current Market Harborough infections: 298. DOWN from last week: 129. Police have issued more than £15,000 in fines after breaking up yet another a rave in east London, as many as 300 people are thought to have participated in the party in Hackney on Saturday night. These stupid and selfish individuals may only be a very tiny majority, but their actions have such wide ranging ramifications and undoubtedly contribute to the length of misery shared by all. Surely they should be made to account for their actions by more than just a fine? Maybe a few hours enforced litter picking on the streets wearing a Hi-vis jacket declaring they are Covid-19 breakers may bring a little shame on them. On a more positive note, over the last two days, almost a million people received their first dose of vaccine. 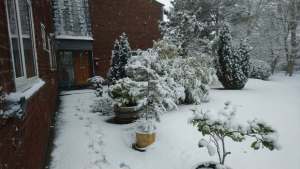 Unfortunately, Charlotte’s next door neighbour (a nurse) who has been isolating after catching Corona-virus, was this morning whisked away in an ambulance to Kettering Hospital. We sincerely wish her a speedy recovery.

What an exciting day the whole family had today! WE HAD SNOW!!!!!!!. Anything that breaks up the monotony of lock-down is welcome and the younger members of the family took full advantage of this now rare occurrence in the midlands. Knowing that the ‘white stuff’ was on the way, I chose to use up my sanctioned exercise session by digging over a bed of raspberries that I have decided is going to be for Cape Gooseberries next summer (fingers crossed). A hard frost overnight had frozen the top few centimetres of earth, ensuring the clods remained intact as I turned them over. The family think I am more than a little mad, digging frozen ground, but it is good exercise, and I do enjoy it so. Hmmm.. I possibly may have a few bats flitting about the belfry, but they definitely don’t carry Covid!

Jamie and Ruth chose to celebrate their aborted Scottish snowboarding holiday by slaloming down the freshly laid piste between Harborough and Great Bowden, while Charlotte and boys dug out their seldom used sledges and careered down slopes in Rothwell. Sarah and Alice made a snowman, and true to my heart Lee went to his allotment and finished building raised beds in readiness for the warm sunny days of summer.

The falling snow continued falling until well after dark and with -5° forecast overnight, Monday morning is going to be an interesting commute for those that have to. 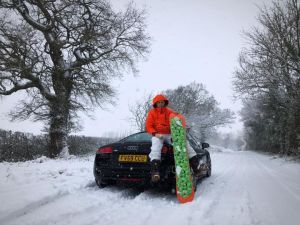