16/11/20 After testing positive for corona-virus, 168 have died in the UK. There are 703 active cases in the Harborough area, up 325 from last week. British scientists have hailed the news that US firm Moderna’s jab may be 94.5% effective against Covid-19.  Five million doses of the new vaccine could be delivered to the UK from the Spring, Health Secretary Matt Hancock  announced.

17/11/20 After testing positive for corona-virus, 213 have died in the UK. There are 785 active cases in the Harborough area, up 386 from last week. A face mask that kills corona-virus and other diseases such as flu could be available as early as next month. The  antiviral face mask was developed by a Nottingham Trent University scientist and kills viruses upon contact of an antiviral layer made of nano-copper.

A study has found that mouthwash can eradicate the disease within 30 seconds of exposure.

In a complete opposite to our previous ramble, this morning we spent 1.5 hrs on a delightful short walk (2.5 miles) from Walcote to Misterton and back.  Parking up in a side street in the tiny village of Walcote, our walk began through the garden of an old cottage, the entrance to which we had some difficulty in finding, but thankfully the accuracy of my GPS showed us the way. A reluctant home owner greeted us with a grumble from the door step of his front door, declaring that the last walkers had left the gate open. He seemed miffed that we had not and Sue enjoyed pointing that out to him.

Negotiating the stile and way-marker at the top of his garden we set off through several grassy fields before entering the village play park, this was the start of a fascinating straight pathway to Misterton Church and Hall. At regular intervals along the route were small information boards, each describing the details of fallen locals during the Ist World War. The first board describing one unfortunate soldier, declared that he was born on the same day but one, as Sue’s mother  (24/5/20). We took our time and read each one, fascinated by their stories. Sadly, later research on the internet failed to reveal any further information on the the Memorial Trail and its contributors.

Moving on,  a brief exploration and circumnavigation of St. Leonard’s church yard followed, before  we headed north through fields and passing quickly over a full and racing (suitably named) River Swift. Turning sharply east along a muddy track that took us through (at times) an even muddier spinney, over fallen trees with occasional glimpses of the river winding away some 50m to our right. We eventually turned south, again to cross the Swift by way of new footbridge, before passing by some quite impressive properties. Not soon after we were back in the village, changing footwear at the rear of my Fiesta, disappointed our ramble hadn’t been longer. With smiles, we both agreed, we shall do this one again. What a difference a week makes, and with shingles too!

We were home before midday and lunch. Charlotte popped in briefly from work to pick up a bag of wood ash that Sue had saved for the hens, they appear to like bathing in it (it rids them of fleas etc.). Later in the afternoon Jamie made an appearance with a large box of surplus frozen sausages for our freezer. Every little helps.

A worrying trend for Harborough. With less than two weeks to go before the end of the current restrictions the numbers are not going in the right direction.

Someone is eating solids!!

19/11/20 After testing positive for corona-virus, 501 have died in the UK. There are 884 active cases in the Harborough area, up 331 from last week. Those coming from Israel, Uruguay, Namibia, Rwanda and Sri Lanka will not need to isolate for 14 days upon arrival in the country, which is good news as we were planning to visit Uruguay in February, all we need is Argentina and Chile to be removed and we may be going on holiday!

Today was very chilly and damp and for some unknown reason I chose to wash my car. I do hope it was grateful. When I had eventually warmed up and dried off, I treated myself by buying a new pair of shoes in town. I had meant to buy some trainers, the ones I use for cycling each morning had disintegrated and are now burning merrily away on the fire, warming my toes very nicely, thank you.

21/11/20 After testing positive for corona-virus, 341 have died in the UK. There are 598 active cases in the Harborough area, up 131 from last week. Major trials will begin this weekend of an antibody cocktail that scientists hope will protect people against Covid-19 and could be swiftly used in care homes or on cruise ships in the event of an outbreak. 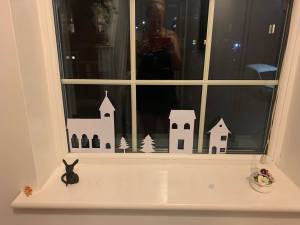 Jamie and Ruth visit the elves

It was expected, but still non-the-less disappointing, the holiday company who had arranged our trip to the tip of South America and the Falkland Islands, informed us this morning that the cruise line that we were to embark on from Santiago had cancelled all cruises until March. Apart from booking flights and the ship, we had made no other plans as we had guessed very early on during  lock-down that this may happen. It seems the vaccine or  antibody cocktail just didn’t come to our rescue soon enough, however that is an insignificant inconvenience compared to the plight of those who have lost their loved ones, or of those who will over the rest of the course of this pandemic.

A couple of weeks ago, Leicester Tigers sacked their coach Geordan Murphy  , and today they took on Gloucester in the first game of the season, and they WON! Geordan is a nice guy and was an excellent player for both Ireland and Tigers, but a coach he was most certainly was  not. He contrived successfully  to steer the club to the depths of mediocrity on the field. I won’t miss him. As a bonus, England stuffed Ireland today in the Autumn Nations Cup. What a day of mixed fortunes.

Strangely, neither Sue or I personally know of anyone who has caught corona-virus, let alone been hospitalised or worse. Yet the published infection rates for Harborough peaked at over 900 during this week and similarly for the rest of the country. Thankfully the numbers seem to be on the wane, but that is no comfort as they still remain frighteningly high. Tonight I watched the news in frustration at a report of scuffles and violence during a  demonstration against lock-down restrictions. Are these people stupid or just plain gullible?  I can understand that like Sue and I, they may have not been touched personally by this world-wide catastrophe, but surely they can understand the maths dictates that with such behaviour, that will only be a matter of time. Are they  egocentric, maths-phobic, anti-scientific stooges to fake news in the mould of Donald Trump?  I fear so!