A £1 million bet on Joe Biden to the win the US presidency has been placed in the UK. The bet was made at odds of 8/15 for the Democrat nominee to win. If successful, the punter stands to win £1,540,000.

During the morning Sue played Petanque with her U3A activity group and was pleased to throw the winning boule for her team. Afterwards she took Doreen some flowers and leeks from the vegetable plot as she is wasn’t feeling very well, she left them to be collected from reception. During the afternoon Sue visited Jim and Bridget with some leeks and to invite Bridget to accompany us to see Sarah and Alice on Wednesday. While all this was going on, I caught the bus into Leicester to go to the Yorkshire Bank. Annoyingly they had moved and the building was up for 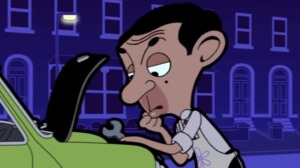 sale. Inquiring next door at Santander, they informed me that the branch had amalgamated with Virgin Money. I had spoken to them on the phone earlier, you think they would have mentioned that!!! Luckily, Virgin Money was on the way back to the bus station. After purchasing mangoes, passion fruit and sharon fruit from the market for Sue, I caught the bus home.

I had a disturbed evening. First, Jamie rang to say his car had run out of diesel in Harborough, so I took him an empty fuel can. After filling it up in a nearby petrol station he quenched the vehicle’s thirst then accompanied me back to Willow Bank with some early Christmas presents. Fifteen minutes after setting off for home he rang to say the clutch had gone on the car and asked if could I pick him up. Whilst on the way he called again to say that a friend was coming to his aid, so I returned home. Eventually, he managed to get the car into gear and left it outside a local garage, to be fixed over the next few days. 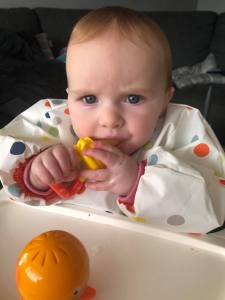 Alice has a liking for mango.

In America, to night is always going to be memorable, with those who love Donald Trump and those who hate him being glued to their television sets. For the good of the planet I hope he fails to be re-elected. The next few days will tell, but the man is not known for his integrity and nothing seems to be beyond him.

Sue spent the morning walking near Foxton with one of her U3A groups. I drove to Little Bowden and fixed Paddy’s iPad which was refusing to Face-time with his son in Florida, before continuing onto Rothwell and picking up a mapping SD card that Suraj had tried to clone for me. I then spent most of the afternoon on the phone, first speaking a holiday insurance company to confirm our holiday to the Falkland Isles would be covered, if cancelled. Then, BT to complain that (as before) I can’t access my account on line. It seems that since Covid-19, making any phone call to a company takes an age, forcing one to listen endlessly to recycling music that I can’t stand.

Jamie had a lift from work this evening to borrow Sue’s car until his is fixed.

Scattered protests took place from Washington DC to Washington state in the hours after polls closed in the US elections, but there were no signs of widespread unrest or violence.

Today, Bridget accompanied us on a visit to see Sarah and Alice. Arriving just after 10am, Lee let us into the house as Sarah and Alice were enjoying a session at a Baby Sensory Group in the village. I set off for a walk with Mia to Bagworth Heath Wood, a 10 minute drive away and part of the National Forest. As it was a dry and fairly warm morning Sue and Bridget enjoyed the garden until Sarah and Alice returned at 11am. 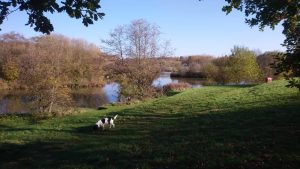 Our ramble through the wood, planted in the earl 1990’s, took us by picturesque fishing lakes and through the village of Bagworth, eventually returning to the car via Royal Tigers Wood, an arboretum containing 17 species of trees from countries in which the now disbanded Royal Leicestershire Regiment served (as the 17th Foot) lies at the edge of the wood. A lovely walk and one I am looking froward to do with Sue after this current bout of lock-down.

We arrived back in time to walk to the village cafe with the ‘girls’ for another splendid lunch. Mia kept Lee company while he snatched lunch whilst working at his desk (the joy of working from home!) Returning after our repast, we spent some time chatting and playing with Alice before returning to Harborough.

With the counting still in progress, Democratic presidential candidate Joe Biden has won more votes than any other president in American history. But, the question still remains whether Trump will make a gracious and swift exit becoming of a president who understands the need to preserve the rule of law and the fabric of democracy. I fear not.

Today, Jim planned to take his car (currently parked on our driveway), to a garage for an MOT. He rang during the morning when I was enjoying a gorgeously cold and crisp, sunny bike ride through the Leicestershire countryside, asking if he could borrow some jump leads as the battery was flat. Unfortunately, my leads were with Jamie, so on return I hooked up the battery to a charger, but it failed to start the engine. Left with no other choice, he had to purchase his own set of leads and soon had the engine ticking over. He returned the car late in the afternoon but it had unfortunately failed the MOT, it is now booked for repairs in a couple of weeks time.
Here in the UK we usually celebrate ‘Bonfire Night’/’Guy Fawkes Day’/ ‘Fireworks Night’, but this year the festivities have been curtailed by lock-down and the usual bombardment of colour and explosions has been limited to family ‘bubbles’ in back gardens.

On a day when the USA is recording 85 Covid-19 cases per minute, Donald Trump looks set to lose the presidency. True to form, he is vehemently contesting the legality of the electoral count. Ironically, he doesn’t question the Covid-19 infection rate in his country.

Millions of Americans have risen up and said: democracy won’t die on our watch. Inveterate liar, bully and narcissist Donald Trump has lost the race for the White House. Nero fiddled while Rome burned, appropriately Donald played golf. I doubt we have heard the last of Trump, he will continue to tweet his whinging falsehoods for many days to come until the crowbar of democracy eventually levers him from the Oval Office. He one tweeted that if he lost, he would leave the country, but where would he go? Russia, North Korea? There are interesting days ahead for the USA, but the rest of the free thinking world has heaved a great sigh of relief.