15/10/20 After testing positive for corona-virus, 138 have died in the UK. There are 321 active cases in the Harborough area. Today, Matlock and most of the Peak District moved into local lock-down Tier 2. We were very lucky to avoid the restrictions by one day!

Using four ‘raw bolts’ I spent the morning fixing the ‘antique’ red post box onto the wall next to the front door  while Sue made leek and potato soup. The notice indicating the times of collection on the box  was replaced with one that asks the postman to use the letter-box in the door rather than the red-box. We may be ‘missing the point‘ of owning our own post-box, but we prefer the convenience of collecting our mail from the floor inside a warm house.

Sarah, Alice and Mia arrived at 10.30am and chatted with Sue while I completed my DIY Post Office task. For lunch we drove to the Red Lion in Welham and unlike our previous visit to this pub, we didn’t come across Jamie. On return, I took advantage of a dry day and mowed the lawns while the others went for a pleasant walk around Welland Park. 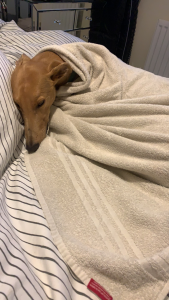 Visitors often knock on the front door to get our attention, despite there being an electric doorbell. However, the button for the internal chimes is located in the corner of the frontage, next to the kitchen window. I can’t imagine why the previous owner sited it there, unless it was for the convenience of saving a bit of  wiring to the WiFi sender unit inside the kitchen. Over the years I have placed several signs on the door pointing to the button, but still people knock. Today (after 21 years), I moved the button next to the door by extending the cabling. I am now looking forward to hearing a dulcet chime rather than a harsh rap-a-tat-ta disturbing the peace.

During the morning, Charlotte was shopping in Harborough and called in for coffee and a chat. It seems that Harry is quite poorly with stomach problems.

After flying in from Kos with his mates, Ruth picked up Jamie from Stansted airport. On their way home, they called in briefly to check on Maddie, promising to pick the rabbit up tomorrow.

For the first time we had our chimney swept professionally. In the past I have always done it myself, usually on a fine day in the middle of summer, but somehow Covid-19 proved to be too much of a distraction and I forgot. Toying briefly with the idea of inviting Ellis or Lucas over for the day  and playing ‘Chim Chim Cheree’ from the film ‘Mary Poppins‘, as they cleaned the chimney, I had second thoughts guessing Charlotte may take a dim view of my enterprise. A couple of ‘smutty’ guys turned up just before lunch with sheets, hose and ‘sucking machine’ and under close supervision from Sue, did a quick and fine job.

That afternoon, Ruth and Jamie were as good as their word and did indeed collect a reluctant Maddie, I think the little bundle of white fur will miss our warm and peaceful glasshouse. During the evening they visited the cinema in Kettering and had the quite novel experience of having the theatre all to themselves. It is sad but understandable that people are reluctant to risk watching a film with Covid-19 on the rise in the area. Harry the poorly greyhound is thankfully back up to speed and feeling much better. 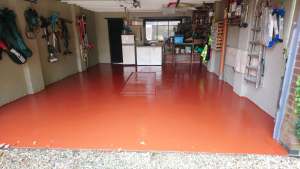 On a windy morning, while Sue went to visit Jim and Bridget, I set about clearing out the garage and then painted the floor with some special paint that Lee had found in his garage. Never one to turn down a free tin of paint, our once grey garage floor is now (Post Office) red.

An early morning phone call from the doctor confirmed that the pain in my arm is caused by arthritis and I have now been prescribed a course of anti-inflammatory medication.

Today, Charlotte, Ellis and Harry drove to Newbold Verdon and had a pleasant walk on a breezy but dry day with Sarah, Alice and Mia.

Sarah found Paddington in a charity shop and couldn’t resist him.

As the weather forecast had predicted no rain over night, I left the cars, quad-bike, tools and other garage paraphernalia  outside in order to let the floor paint thoroughly dry. At 2.30am, snug in my warm and cosy bed I heard the rain thundering down on the roof (thank-you, Google forecast!!!!), over the next 20 minutes (in dressing gown and slippers) I splashed through puddles, moving everything that couldn’t afford to be soaked, under cover. Not surprisingly, I woke late (8.45am) and after a lazy breakfast I set about putting everything back into their proper places. By lunch time the task was completed and  the garage looked rather smart and tidy.

Despite this year’s miserably depressing grape crop, I started the fermentation stage of the few bunches harvested. Last year saw 2×25 litre barrels and 5×5 litre demi-johns of juice fermented, this year; just the one demi-john supplemented with 1 litre of Mango juice!

21/10/20 After testing positive for corona-virus, 191 have died in the UK. There are 531 active cases in the Harborough area. South Yorkshire will move to Tier 3 lock-down as from Saturday. This is uncomfortably close to North Yorkshire 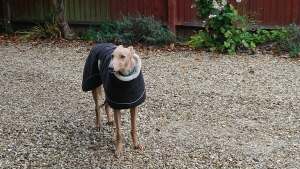 where we are planning to do some walking next week.

On a day forecast for storm Brenda to savage the country, Charlotte and Ellis brought Harry to stay. The Rothwells are having a few days in Oxford and their accommodation doesn’t permit dogs.

It did indeed rain all day, which made for a very wet dog and very muddy wellies on the three walks we managed to splash our way through. Harry’s waterproof raincoat proved to be not so waterproof, after just the 1st constitutional it had to be swapped for his warm-coat on the next two (slightly less wet) outings.

Today was much improved from yesterday, so after breakfast I chose to take Harry for lunch to Foxton Locks. Leaving Willow Bank just after 9am, our route took us past Gartree Prison and onto the canal just outside the village of Foxton . Surprisingly, for a pleasant, school half-term day we saw no other walkers until we arrived in the village. Amusingly, we were following a section of canal through the village towards the Locks,  when I heard a tremendous splash behind me. Off the lead, it was Harry! Somehow he had fallen into the water alongside a moored narrow boat. Grey hounds do not swim well, especially if they are wearing their raincoat, with just his head poking above the water I managed to pull him from the dark green, leafy surface with the hood of his coat, without getting wet myself. Standing on the bank he looked one miserable canine. Removing his sodden coat, he shook himself violently and magically it was as if nothing had happened, he got back to the serious task of sniffing bushes and cocking his leg.

The Locks were very busy.  Arriving at Bridge 61 (pub) with a drying mutt, I chose to sit inside this empty hostelry and have pie and cider with Harry treated to  a packet of dog chews. The other customers preferring to enjoy the ducks and  sun outside. Our route home took us through Lubenham and another refreshing drink at the Coach and Horses, I haven’t been to this hostelry since Peter flew to New Zealand last November, apart from the usual Covid restrictions, nothing has changed and the place seemed fairly busy. It was bath-time for a smelly Harry when we eventually arrived back home. 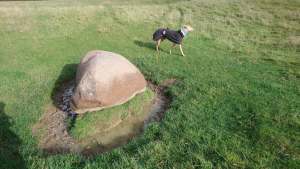 After heavy rain fell during most of the night, I took Harry on a  a muddy walk to see the Judith Stone, then took him home to Rothwell. Charlotte and family had returned from their three day break in Oxford and were desperate to be reunited with their pet.

Today was a special day for Nala, Ruth took her to the vet to be spayed. The operation seemed to go well, but she is likely to be quite delicate for a few days. Tomorrow Sue and I have the pleasure of looking after both Nala and Rocky overnight as Jamie and Ruth are treating Joey and Ellis with a trip to London, and a performance of Spiderman, including an overnight stay in a hotel.

It was 9am when Jamie, Ruth and Joey dropped Rocky and Nala off for their doggie break, before driving to London, diverting to pick Ellis up in Rothwell.

The day turned out to be wet and windy, not great for being outside! Despite her operation, Nala seemed to suffer no ill effects and was full of energy and bounce, but to be careful, when I took Rocky for walks, Nala had to be satisfied with the garden and Sue’s company.

That evening, with the wind howling outside and the rain pouring down, Sue and I cosily watched a film on Netflix with two sleeping mutts and a blazing fire.

25/10/20 After testing positive for corona-virus, 151 have died in the UK. There are 642 active cases in the Harborough area, up 192 from last week. Wales has entered a 17-year-day lock-down, with pubs, restaurants and non-essential shops ordered to close until 9 November.

A couple of very sleepy dogs were collected during the afternoon and transported back to Desborough by their owners. The house seemed strangely empty after they had gone, but with a trip to north Yorkshire tomorrow morning, Sue and I busied ourselves with getting ready for a week of rambling and sight seeing.

*To date (10 days) the relocated doorbell has yet to be pressed! Despite the button being right in front of visitors, they still engage the knocker! What is wrong with people? I bet it will be rung endlessly the week we are away!!!! 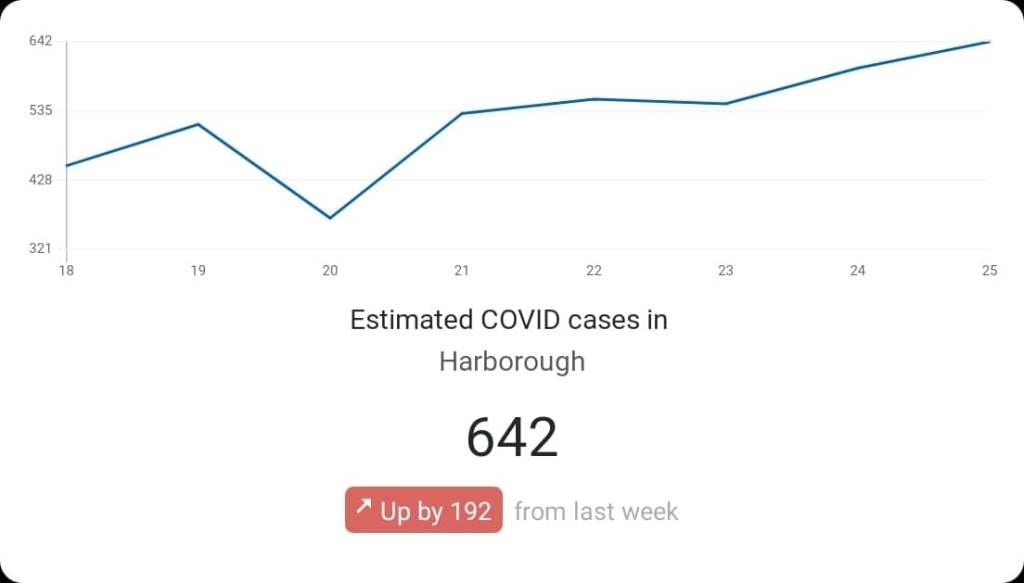