25/05/20 The UK corona-virus death toll across all settings has risen by 121, bringing the total to nearly 37,000. From June 1, outdoor markets and care showrooms could be reopened as soon as they are able to meet the COVID-19 secure guidelines, and all other non-essential retail from June 15 if the government’s tests are met.  Annoyingly, for the second time I find myself agreeing with the First Minister: Nicola Sturgeon accused Boris Johnson of putting political interest ahead of public interest in a damning verdict on his support for a controversial adviser.
The First Minister said she is “very concerned” that backing Dominic Cummings for breaking travel restrictions undermines life-saving guidance. I know it is tough to lose a trusted adviser at the height of crisis, but when it’s a choice of that or integrity of vital public health advice, the latter must come first. That’s the judgment I and, to her credit, Catherine Calderwood reached. PM and Cummings should do likewise.

Going round in circles.

Another fine day in Harborough, one degree warmer than Cyprus and on a Bank Holiday too!  The most exciting thing that happened at Willow Bank today was a visit by Jamie, Ruth and Joey. They arrived late morning to pick-up my Sevylor inflatable canoe to go for a paddle. After inflating it on the driveway we took it up to the Grand Union Canal in Harborough where I helped launched it onto the water. For a while I watched them paddle in circles before returning home to paint another three fence panels. A couple of hours later, after getting as far as the bridge on the edge of Great Bowden they returned to their launch point, I picked up the canoe and took it home. After socially distanced cool drinks in the the garden, the three of them left to buy some charcoal for an evening BBQ and I returned to my fence decor. 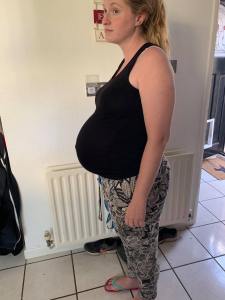 Sarah is growing ever so much larger. Lucas complained about the length of his hair and got his mother to cut it, despite two and a half glasses of wine, Charlotte did quite a good job. They got the  pool  out in the afternoon.

26/05/20  There were 118 deaths from corona-virus recorded on 25 May in the UK, bringing the total number of deaths to 36,793. Only the US has more confirmed deaths from the corona-virus, with a total of 99,805. A government minister, Douglas Ross has resigned over Dominic Cummings’ lock-down trips, piling on more pressure for the top Downing Street aide to be sacked. Ironically, Matt Hancock took to the podium for the government’s daily press conference – and appeared to suggest the government would look into reviewing the fines of those who had travelled under a similar pretence to that of Mr Cummings.

It seems that the UK is not the only government to become mired in  politically motivated accusations: Spain denied on Tuesday that it had sacked a senior police official as punishment for criticising the government during an investigation into a decision to approve a rally in March that may have helped spread the corona-virus. Tourists will now be able to visit Spain from 1 July without having to quarantine for two weeks.

I woke early foregoing my morning cycle, and got ‘stuck into’ the  vegetable patch at 7am before the predicted heat of the day became unpleasant for a northern hemisphere gardener. With hedge trimmed, plants watered and weeds dispatched to the great compost in the sky I finished in time to join Sue for lunch and ‘Bargain Hunt‘. My favourite presenter  Charlie Ross, was in charge today and produced another fine, amusing performance, I love his sense of humour and easy going relaxed handling of the contestants. 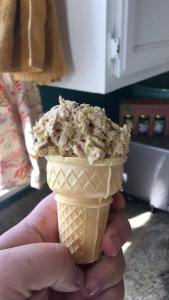 Running perilously short on hot-weather cooling drinks,  before concentrating on completing my outdoor-clock repair project, during the afternoon I made a quick dash in the car to the Co-op in town to restock the garage fridge with these essential lock-down items. Having  nearly finished the clock with just the hands left to attach to the mechanism, Charlotte arrived from her gardening work. Enjoying some refreshing Co-op booty, the three of us sat outside (socially distanced) and chatted, shaded by the cantilever umbrella on the  back patio.  Sue’s back was beginning to play up, it was quite sore from getting up this morning, she had no doubt aggravated it even more by continuing her daily assault of the the fallen leaves and other debris that magically appears overnight around the garden.

Trellis Price has a nice ring to it.

Charlotte left clutching two more cucumber plants and a sunflower for Ellis. Her chickens had eaten the previous ones that I had supplied a week or so ago and she was keen to have them replaced. From being very young, she has loved cucumber, in the past I would often discover that the odd  fruit would disappear from the greenhouse as it ripened, snaffled by my little girl.

Jamie posted a photo of a tuna and sweetcorn cone on Family Messenger that he was eating whilst at work. I thought it was an unusual and possibly scrumptious combination of filling for a cone. The rest of the family seemed to vehemently disagree, but I say, don’t knock it until you try. I am going to make myself one, soon.

Sarah and Lee have again been trying to encourage a premature birth. Today they visited the wood yard and bought more posts and trellis and painted them. I now think that ‘Trellis’ would be quite a unique name for a little girl, and so appropriate too. Imagine, in the future, when asked how she got her name, ‘Trellis’ would have such an interesting tale to tell. 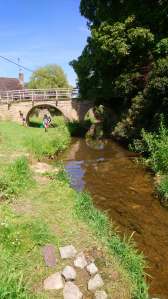 27/05/20 UK’s official Covid-19 death toll leapt by 412 to 37,460 – nearly double the number of hospital fatalities announced on Tuesday. Matt Hancock has officially launched a new test and trace programme, with anyone  displaying symptoms to report themselves to officials, starting from 9am tomorrow.  Despite  a YouGov poll indicating 71% of respondents said they thought Cummings had broken the rules, and 59% that he should resign, Boris Johnson still stands by his top aide, risking the credibility of the governments’ Corvid-19 strategy and confidence in his judgement.

Sue’s sore back was sufficiently improved for her to suggest that we go for some exercise. The U3A walking group that she enjoys so much have had to abandon their regular rambles for obvious reasons, but last week the leader of the group sent out details of a circular walk from the nearby village of Medbourne and she was keen to follow it. After breakfast I downloaded the route onto my GPS and by 9am we were on our way to this very pretty Leicestershire village in the Welland Valley.

We parked up by the little bridge over the Medbourne Brook and in front of the Neville Arms,  a two storied ironstone building of the Tudor style dating from 1863.  The inn was built by Capt. G. H. Nevill, brother and heir presumptive of Cosmo George Nevill, owner of the Holt estate, to replace the previous building which was destroyed by fire. In the past Sue and I have visited this lovely hostelry many times, but  its days as a pub are now finished and it is presently a restaurant/cafe.

The route was one that we have walked previously, but the Welland Valley is always a joy to spend time in, especially on such a gorgeous day as this. After leaving the village via the road heading towards Uppingham, we cut into the countryside following a well used trackway, passing by a small wooded area that 20 years or so ago, at the request of the Forestry Commission, I had spent a couple of days with my class planting 100’s of small saplings. It was delightful to see that they were doing so well, I wondered if any of the children who had dug so many holes and stamped soil around thin bits of twig have ever been to see the fruits of their labour since.

We passed quite a few dog walkers, runners, horse riders and ramblers like ourselves, enjoying the freedom of being able to bend the lock-down rules just a bit (courtesy of Mr. Cummins), without feeling the imposed guilt of the last nine weeks of  “Stay at home. Protect the NHS. Save lives.” Engaging a passing gentleman with dog in pleasant conversation, he asked if we had seen the carved Viking on the the way-post at the top of the hill. Now we had an objective other than pure exercise, and quickened our pace up the incline toward the yellow topped post we could see in the distance. We arrived at the same time as two women on horseback, we tarried a while  to let them pass  out of sight, then set about investigating the post for the carving. And there it was! Oooooo, the mind does ask questions when confronted with such a conundrum, why???

The next highlight on route was passing through the small pretty village of Nevill Holt and the grounds of a locked-down Nevill Holt Hall. The existing great hall was originally of the 14th century and that its front was a later addition. There was certainly a large manor-house at Holt in 1302 when the property was divided between the four sisters of William de Kirkby. Many of the additions and alterations to the house were probably the work of Sir Thomas Nevill (formerly Smyth) between 1591 and 1636. We passed a team of gardeners busy planting a long length of new hedge with sprigs of hawthorn along a steep south facing slope, the views were magnificent but the heat was getting quite fierce and I didn’t envy them their task. 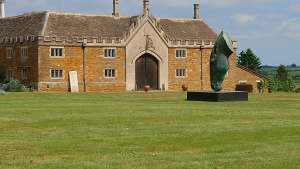 Returning to the car, we unpacked our picnic lunch and sat on the bank of the brook under the necessary shade of a cherry tree.  Cheese and tomato sandwiches, tangerines and fig rolls, just the right fayre after a gentle ramble as this. Food finished, we set off in search of a Geocache located near some double gates opposite the church. We found it after 15 minutes of ferreting along the base of a metal fence, always keeping an eye out for nosy muggles!

A very in-depth and fascinating description of the history and geography of the area through which we strolled can be found on this link: Medbourne and Nevill Holt.

During the evening the family (through Messenger) excitedly scanned the sky to see Elon Musks’ SpaceX  and the ISS, but disappointingly the launch was aborted due to bad weather in Cape Canaveral. Like Elon, we will try again on Saturday.