Most passengers now seem to have got themselves into a ship’s routine, depending on their own particular likes and interests. There is much happening on board to amuse those that don’t wish just to sunbathe, eat, listen to music in the bars or just wait until the next port provides some further distraction. The active among us have the gym, keep fit classes (in and out of the pool), dance classes, table tennis and the ‘Walk a Mile’ club. The intellectual have lectures, regular quizzes, chess, Bridge and an extensive library. Then there is the evening show, casino, karaoke, deck shuffle board, a whole host of silly game activities, Interdenominational Fellowship meetings, Solo clubs, craft making classes and a book club. Not forgetting several on board shops for those that enjoy retail therapy. For those that enjoy a spot of pampering there is the Spa where you can indulge yourself with a facial, massage or any number of weird beauty treatments.

Each evening the ship’s magazine called ‘The Explorer’ arrives in the cabin and it contains all the following days activities and their times, including notification of any special events and what is happening in the Show Time Theatre. There is also information on where we will be, either in port or at sea, predicted weather and sea conditions, plus a whole host of cruise facts to satisfy the statisticians among us. We are given the times of the meals and which restaurants are open and most importantly we are informed of the required dress for the evening meal; casual, informal or formal. This little gem of a magazine determines our day. Sue and I mostly pursue our own interests, though occasionally they do match. However, we always arrange to eat together and usually rendezvousing back in the cabin just prior to a mealtime, where we make a quick decision as to where to eat, depending on how we feel.

When is a spicy chicken wrap not a chicken wrap? During lunch today both Sue and I ordered a spicy chicken wrap for our main course. I thought it was delicious and Sue thought it rather dry, as there were two on each plate she kindly offered me one of hers. I gratefully accepted, thanking her for her generous offer. As the wrap was being handed over she deftly whipped out the inner chicken core and placed the wrap devoid of its central theme onto my plate. Yes, I did scoff the dispossessed wrap and what little was left of its spicy contents, and I did to some extent enjoy it, but a valuable lesson was learnt: Don’t put your trust in those bearing empty gifts!

The Magellan dropped anchor off the Salvation Islands; Devil’s Island, Royale Island and Saint-Joseph Island. Just after breakfast we took the short tender boat ride to the tiny pier on Royale Island. The Salvation Islands get their name from missionaries who went there to escape the plague which was rampant on the mainland of French Guiana, just under 9 miles away. The islands were part of the of a notorious French penal colony from 1852, made famous in the film Papillion. The French captain Alfred Dreyfus was imprisoned there for his part in a political scandal, until he was pardoned. Today, it is a tourist attraction with a small hotel and restaurant.

From the sea, the three little islands look idyllic, a picture post card of tropical heaven. However, they hide a dark secret of cruelty and brutality. Harsh conditions, disease, heat and humidity affected all that lived there, prisoners and warders alike, but those that were incarcerated suffered the worst. The worst criminals and those that contracted leprosy would be transported to Devil’s island, where unlike the other two islands there were no buildings for shelter and though left free to roam, the shark infested waters and strong currents ensured that they remained there, most often to die. Rather gruesomely, dead prisoners were fed to the sharks, only the warders and their families were buried.

It was a hot start to the day, bright sun and a welcoming breeze, but where the cooling air didn’t reach, the temperature soared into the high 30’s. We began our exploration of the island by climbing one of the many paths up to the prison compound itself. Beautiful views of the sea and other islands all the way, even the mainland could be seen through the heat haze. Thankfully, the island that had been denuded of its trees by those prisoners of long ago, had recovered and there was shade and sanctuary from the sun in plenty. 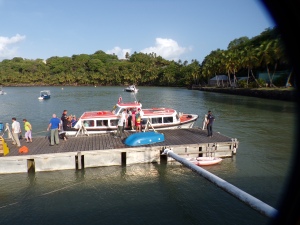 Part of the prison complex had now been turned into a small hotel, shop and restaurant with many of the buildings once used as living quarters by the warder’s families, now being used to accommodate tourists. It would make for a very peaceful vacation, unless 1500 cruise ship passengers just happen to visit!

The cell blocks, though now in various stages of ruin can still be entered and a feel for the harsh conditions suffered by their inmates can easily be imagined. France’s worst criminals were sent here, so you could say that they got what they deserved. However, like Dreyfus some of them were political prisoners and this was a convenient place for them to be forgotten. It is certainly true that you had to be extremely tough to survive the conditions here as a prisoner and few were.

Today, there are sweet looking little coati in their 100’s scampering in and around the buildings, searching for any fruit fallen from the thick cover of trees, competing with small troops of capuchin monkeys that occasionally swung down from the canopy whenever food was on offer. Neither seemed afraid of the presence of so many humans. Indeed, when I produced two small bananas from my rucksack I immediately had a monkey at my side with out stretched hand, squeaking his plea for food. As I reached down he delicately took the first, scoffing it in one, then immediately pleaded for the other. I am too soft, I gave it to him. The rest of his troop watching from the sanctuary of a tree screamed their displeasure at me. I had to agree, he did make a monkey out of me! 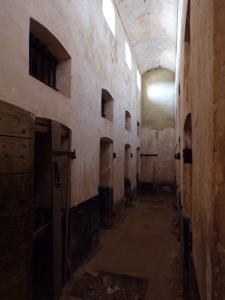 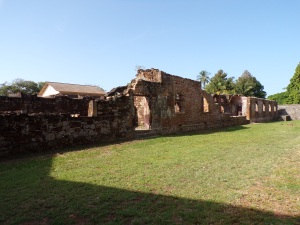 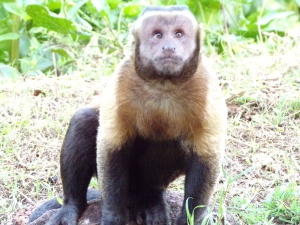 We took our time wandering through the surprisingly large complex of buildings, some with boards explaining what they had been, unusually, both in French and English. Some had been completely renovated, such as the church and lighthouse, others were in a sorry state of disrepair, the once grand looking hospital was looking quite dilapidated, though I think still salvageable if the effort was made. It was particularly sad to come across a small cemetery dedicated to the burial of the warders children who must have succumbed to the harsh conditions of 17th and 18th century life on this island. Standing there, surrounded by lush tropical growth, a cruise ship at anchor offshore, before me little crosses set in an overgrown and uncared for graveyard, I agonised whether to take a photo. It was a wretched place, and now there is peace, it would be one of the more poignant photos that I would ever take I thought, as the shutter clicked. They deserve to be remembered. 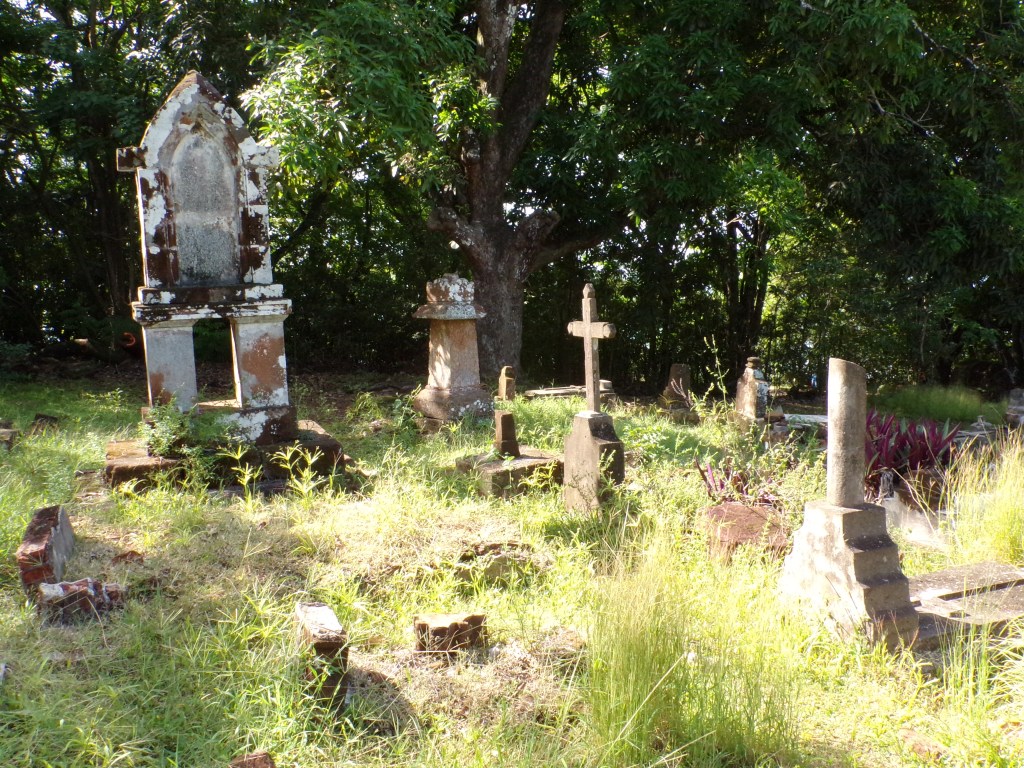 Now thoroughly sweating and starting to feel the exhaustion of our efforts, we retired to the island’s restaurant where we sat on the veranda sipping beer and orangeade in a cooling breeze. The view of the nearby Devil’s Island below, was as perfect an advert for some new party-time cocktail drink as you could get. Perhaps, enticing you to dive into that blue, gentle foam washed sea and swim, cocktail glass in hand on to that idyllic palm tree fringed atoll. Just a shame that the sharks don’t drink cocktails, more used to enjoying a bit of lean prisoner in the past, so a nice fat tourist would go down very well!

Refreshed and suitably chilled, we descended the hill and set off following the narrow winding path that circumnavigated the island closely hugging the shore line. We were on the lookout for sea turtles and they were there, close in, feeding around the wave splashed rocks. Annoyingly (as ever), by the time my camera clicked, they had dived. Frustrating, particularly as they continued to pop up randomly, everywhere along our route. They maybe nowhere near as quick as dolphins, but they have the same knack of appearing where your camera isn’t pointing. 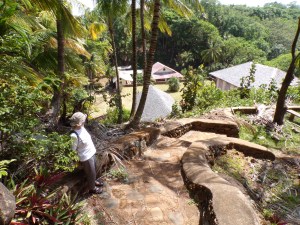 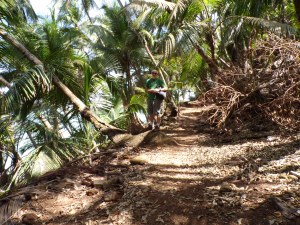 We rested awhile next to a small man-made lagoon in which a couple of fellow cruisers were enjoying a swim and took a few snaps. We sat awhile admiring the view, though neither of us contemplated joining them, it was far too hot to further exert ourselves by attempting to take off tops that now seemed to have been permanently stuck to skin with superglue.

Moving on, we passed a large number of crew (probably on their way to the lagoon) who had been given a rare afternoon off to enjoy this anchorage. I looked for our cabin steward Margarita, as she had told us earlier that she was one of the lucky ones to escape the ship today, she deserved a good chillout in that lagoon, but we didn’t see her.

land’ for the day, I could understand why some of our fellow passengers who had previously been here had described it as being one of the nicest places that they have been to. Given the opportunity and with nothing in particular to do other than enjoy the solitude and scenery with a good stack of books, I would come back and stay for longer. However, I would first check to make sure there would be no cruise ship arrivals to spoil my peace!