With another weather warning for the UK as hurricane Lorenzo made its way across the Atlantic was probably not the best time to gamble on another few days away from the comforts of home, yet ‘Qui audet adipiscitur‘.

Sue and I suitably prepared ourselves for any adverse ‘biting’ winds by visiting the dentist prior to our excursion to the Peak District. Sue for a six month check-up and I to have a filling replaced that had fallen out the previous week.

On the 1st Oct. Sue had a U3A walk in the north of Leicestershire and I had arranged to take a load of wood chippings collected from a large pile supplied by Harborough Council  over to Rothwell with Peter for Charlotte’s chicken coop, apparently the hens were complaining about their muddy floor.  I wasn’t surprised that Sue returned soon after her walking group had met-up in Melton Mowbray. Lorenzo had hit the country the night before and their planned route had become impassable due to flooding.  The hens clucked their approval of the new flooring that Peter and I supplied, afterwards we visited The George again for another very filling lunch.

On the 2nd we set we made our way to Meltham in West Yorkshire, on the edge of the Peak District. We parked up in the carpark of the Durker Roods Hotel, our accommodation for the next two nights. The hotel name means a large area of marshland/wetland, surprising as it is located on the steep slope of a hill. After checking with the hotel that they were expecting us we changed into our walking gear and set off on a planned route that I had plotted in my trusty GPS. However, I left it to Sue to choose which of the two routes that I had planned we would walk that morning and after loading it onto my GPS it eventually became apparent that we weren’t matching the route that was on Sue’s paper version! I had loaded the other. Instead of a walk to a reservoir, we were on a much hillier trek.  With resignation we opted to continue. Despite the horrendous morning weather forecast  we were walking under blue skies so decided to ride our luck.

Our route skirted the forested sides of a line of hills passing by several up-market houses situated along barely navigable lanes. Conkers, acorns, sweet chestnuts and blackberries abounded, as did many species of fungi; particularly the easy recognisable Red Cap. I had assumed that this fungi was extremely poisonous, but I have since read that in certain parts of Europe it is eaten, after twice boiling. I will still pass on that!! 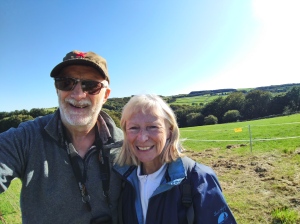 We stopped to eat our picnic around halfway, in a sunny spot alongside a narrow, dry stone-walled bridleway which skirted the ancient oak wood of White Rose Forest that we had been cutting through. I have often mused that it would be nice to learn how to construct a dry stone wall. A couple of noisy young women on horse-back passed by as we finished our meal, while they slowly made their way down the track we headed off in the opposite direction. Though Sue didn’t get to see her reservoir, we did pass by a very pretty lake, spotting a deer through the trees off the path we were quietly following.

Returning to the hotel we checked in, refreshed ourselves with coffee and biscuits before driving into the small town of Meltham to have a look around. With not much to see we drove a short distance to the large village of Slaithwaite in the Metropolitan Borough of Kirklees. Through here the Trans Pennine Rail route, the Huddersfield Canal and the River Colne pass. Quite pretty now with its renovated Cotton and Wool mills having been turned into apartments or shopping malls, in its industrial past the many tall chimneys (still visible today) would be spewing out smoke from the boilers beneath, providing  the power to work the looms. The evidence is in the smutty staining on the sandstone bricks of the all but the modern buildings. It is here and in Nottingham that the Luddites resided, a topic that those of my generation learnt about in their history lessons. I wonder if they do today?

Returning to the car we came across a fascinating antique shop. Sue and I are both fans of ‘Bargain Hunt’ and ‘Antique Road Show’ on the TV, often expressing our disgust at the ‘experts’ abysmal advice and performance, here was a chance to show our metal! It was a fabulous place to dive into, full of eccentric artefacts and very reasonably priced. It was very late in the afternoon and very close to closing time so we didn’t have time to really dig out the hidden Claris Cliffe, Lalique, or perhaps an unknown LS Lowry. However, Sue did find a small Freda Doughty figurine of Royal Worcester ware that she is collecting and purchased it. I found a corner chair, large enamelled vase and glass paperweight that if I had bought, would have made me a fortune, but I didn’t. With her booty carefully wrapped in a hand-bag we made our way back to Durker Roods.

That evening we ate in the hotel restaurant, as expected from the reviews it was a lovely meal.

Though it rained heavily overnight, we again woke to a dry but overcast morning. Fully breakfasted we made our way to Shibden Hall near Halifax. We both watched the recent TV series ‘Gentleman Jack’, based on the diaries of Ann Lister (1790-1840). We remained fortunate as though the surrounding landscape was obviously thoroughly soaked, we escaped any further rain until late in the evening. I was very impressed with our visit to Coughton Court a week or so ago, but Shibden Hall is even better. It has been beautifully restored by Calderdale Museum service and unlike Coughton it is staffed by guides dressed in authentic wear of the period who were only too willing to explain the history of the building and the lives of its previous inhabitants. It is as if the building, outbuildings and gardens have been frozen in time. I had to contact the hall prior to our visit, the BBC is due to film a second series  in which case it would have been closed to the public. We cannot wait for it to appear on the TV. 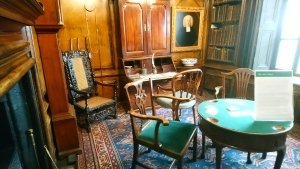 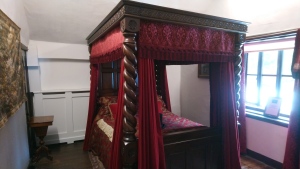 Moving on we passed through Slaithwaite on our way to Standedge Tunnel and Visitor Centre, resisting the temptation to go hunting for another antique bargain. The tunnel is Europe’s longest and deepest canal tunnel at just over three miles in length. Disappointingly,  as it is out of season our planned boat trip through the tunnel (takes 2.5 hours, one way) only runs at the weekends so after peering into the darkness (foolishly thinking I might see the other end) we amused ourselves in the Visitor Centre. The history and building of the tunnel and canal is described in static displays and a very good video. 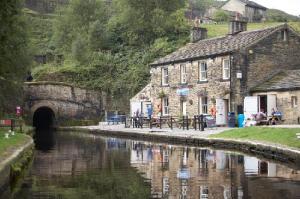 We passed through Meltham on our way to Holmfirth, made famous as the location of the comedy series ‘Last of the Summer Wine‘, which ran on the BBC for 39 years! I remember visiting this small town regularly as a child, my aunty Edna lived just a few doors away from the focus of our visit: Nora Batty’s Cottage. Whilst researching what we were going to do in the area I came across a link that indicated that the cottage could be hired, so I booked it for myself and three friends for a date in April. Next door is ‘The Wrinkled Stocking Tea Room‘ where we shall have break fast and directly opposite over the river is the ‘Elephant and Castle’ where we shall seek refreshments. We had intended to visit the small museum housed beneath the Tea Room and commemorates the series, but it was late in the afternoon and annoyingly we were prohibited from entering as there was only 20 minutes to go before it closed. Instead, we took a walk through the town and discovered a small theatre that may well provide some entertainment in April. Before returning to the car we rested awhile in the Elephant and Castle and sampled some of their ale. 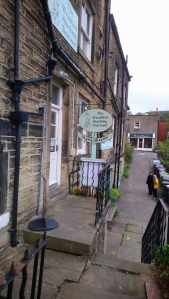 On our return to the hotel  we stopped at Digley Reservoir, one of the locations often seen in the TV series  (1973-2010). It took us exactly an hour to walk along the well trodden path that circumnavigates this body of water. It is quite a popular spot and we came across quite a few doing exactly the same.

That evening we ate in a Persian restaurant in Meltham. A quite unique menu containing a fusion of different eastern cultures and both Sue and I found our meals very tasty. Worth a visit. It was pouring with rain when we left, but luckily I had opted to drive the short distance from the hotel.

We checked out of the Durker Roods after a late breakfast and made our way to Castle Hill where Victoria Tower is a prominent feature visible from the surrounding area. It was slightly drizzling as we parked up next to the tower, but Yorkshire people are hardy folk and there were plenty taking their dogs for a walk or enjoying the limited scenery. The tower can be climbed, but not during weekdays out of season, though the views from the elevated doorway were good enough. We tracked around this once ancient Neolithic hill fort reading the information boards set at regular intervals before heading back to the warmth of the car. 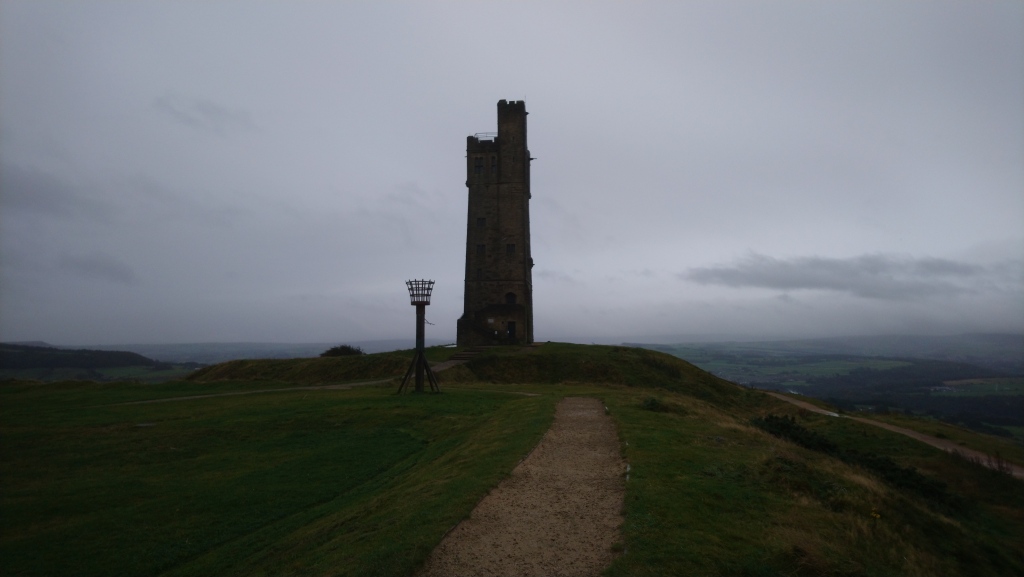 Next stop was back to the ‘LOTSW’ museum in Holmfirth. It is very small and I guess if you are not familiar with the programme it would seem very nerdish. Sue and I cannot claim to have seen much of the series or to have been ardent fans but the props and the excellent video brought back many memories and chuckles. There was a couple of American guys who sat with us watching a video presentation by characters who appeared in the series, they hooted with laughter at the gentle humour of the show. It seems that it is very popular in the USA.

Many of the actors have now passed on since it was last shown in 2010, two of them are buried nearby and it was to St. Johns church just a few hundred metres from Nora Batty’s  that we went to next. It was while sitting on a wall during filming above the town that ‘Compo’ (Bill Owen)  decided that the church yard below would be where he wanted to be buried, and he is. In the next plot, in a much less grand grave is ‘Clegg’ (Peter Sallis), his friend and fellow actor. 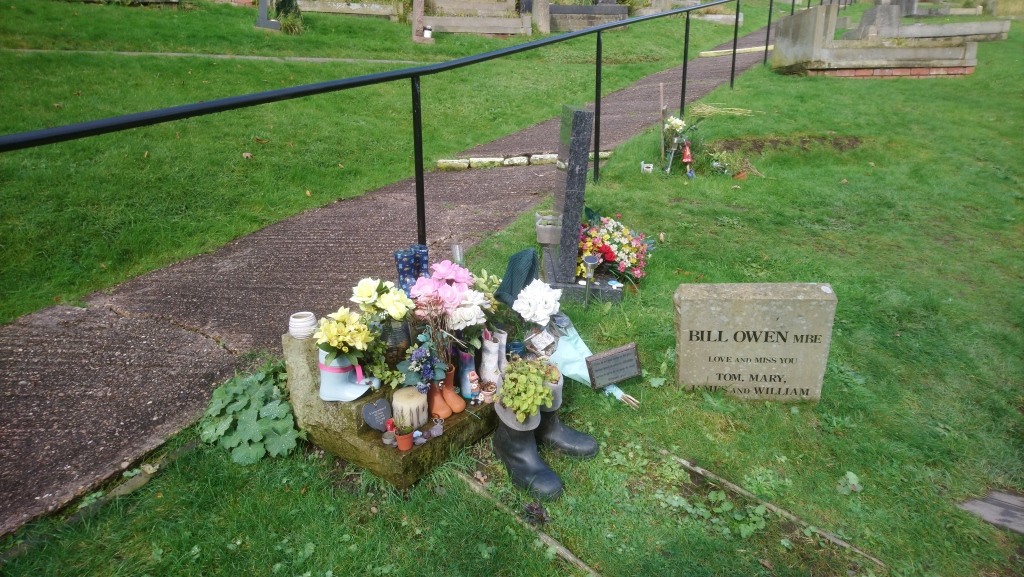 We returned to Durker Roods for afternoon tea at 12.30pm. Sandwiches, cakes, cream scones and strawberry jam washed down with tea and coffee, very civilized, very English. Topped up with more than enough calories we drove back to Harborough, stopping on the way in Thurcroft. I haven’t visited the village since my mother passed away and I was inquisitive to see what had become of the house she used to live in. It hadn’t changed much other that a wall had been built in the back garden and the back door had a new step. The village itself also remained much the same though with more housing and a small new shopping area. We also called into to see my father’s grave, it was surprisingly in good condition and well maintained by the authorities. I should visit more often.

The day after returning from Meltham I helped Jamie put up some curtains in his bedroom. He has decided to keep the house and is taking on the mortgage himself. Hopefully it will be a good investment for him.