Our return to the UK went without a hitch. The taxi transfer to the airport arrived early and the Etihad flight took off on time. Our transit through Abu Dhabi went smoothly and the chill of a Heathrow landing was an apt wake-up for our onward journey, first by underground to St Pancras and then by fast train back to Harborough. A much fitter and happier Charlotte greeted us with Harry (the greyhound) on the platform to give us a lift back to Willow Bank. She informed us that the last week had been rather warm and that today was going to be the last before a cold spell was due (she proved to be right!) It was quite a while and a struggle before we acclimatised to northern hemisphere late winter temperatures and our internal clocks adjusted back to Greenwich Meantime.

A few days later we were treated to Sunday lunch at Charlotte’s and distributed a few presents before travelling to Desborough to see Jamie and Ashton in their new home. They were in the middle of decorating and some of their furniture was yet to be delivered but it is a lovely starter home for them and it looks easy to maintain. A few days later I spent an afternoon helping Jamie re-roof his garden shed with felt and then build a shelf inside the airing cupboard before providing moral support as he finished off painting the staircase wall. 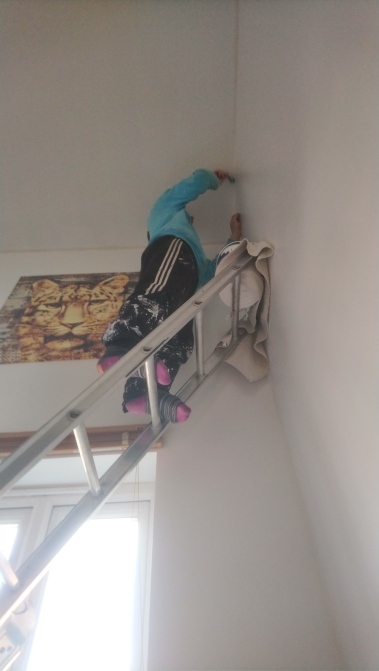 The following day was my birthday and I celebrated it with a trip to the Leicester Royal Hospital for an eye check-up. A scan showed that everything was stable and I no longer required any further injections and have been placed on the regular check-up list. Not a bad birthday present I thought and I celebrated with a sausage roll from Greggs. I spent the rest of the day shopping in Harborough for seeds, in readiness for the growing season.

Sue and I travelled to the Black Horse in Walcote for a delightful meal that was a very late Christmas present from Sarah and Lee, the following evening Jamie took me for a birthday meal at the Mexican restaurant in Harborough. Having just completed two months of a continual sea-borne feeding frenzy, within five days I had negated my promised fast with three substantial meals in five days!

On the 10th of March, we journeyed to Newbold Verdon to inspect Sarah and Lee’s decorating skills in their new home and were quite impressed with what we saw. They had been putting in a lot of hard work over many late nights to decorate the rooms downstairs to their own taste and style, the upstairs and the outside would have to wait until the spring arrives. That afternoon the four of us had a very pleasant and substantial four-course Sunday lunch at the Bosworth Hall Hotel in nearby Market Bosworth. Later that evening Sue and I went to De Montfort Hall in Leicester to see the British Pink Floyd. It was a birthday present from Charlotte and Sarah and what a thoroughly enjoyable one it was too. The band was magnificent, I have seen the real Pink Floyd twice as I have the Australian version twice, but the music and blend of theatre in the performance by the Brits was something rather special. We shall see them again in the future, I am sure.

On the 14th, Charlotte invited Sue and I over for an evening meal, Suraj was away for the week up in Leeds on an IT course and she fancied a bit of adult company to dilute the energy of two boys and a greyhound.

On the 15th Jamie bought a new car, sadly he had sold his Aston Martin the previous week to an employee of Aston Martin itself from London. He now has a black V10 Audi R8. It certainly is a beast of a machine, but I did love his Aston and there was a time when I would have made an offer for it, but not now, my little Fiesta rarely leaves the garage and when it does it spends most of its time in an airport long stay car park, where would I put my grow bags and grass cuttings?

On the weekend of the 23rd, Sue drove to Tenbury Wells for the weekend. She was attending a reunion that had been arranged by old school friends. She stayed with Sheila on Saturday night after a buffet meal and disco at the Fountain Inn in the town. Around a hundred or so of her past school chums attended, many of whom she has kept in touch with through a website where they share photos of their school days and also of the various activities in the town during the same era. She particularly enjoyed chatting to the teachers that attended, they were in their 80s and 90s and still apparently quite spritely, taking to the dance floor with energy.

As Sue was still in Tenbury on Sunday, Charlotte kindly invited me over for lunch with Suraj, the boys and Harry. Much better than the bowl of tomato soup that I had been planning on!

During the three weeks since returning from our cruise, we have gradually settled back into our Harborough routine. I have planted 5 rows of potatoes, 3 rows of broad beans and 10 rows of onions at the allotment. As usual, I am risking the late frosts, but only time will tell if the gamble pays off. The pool has been cleaned, though the pump did have to be disassembled and sprayed with WD40 as it had somehow managed to seize while we were away. The lawns have been mowed though a more accurate description would be that the moss has been cut shorter!!!! Sue is back walking with the U3A and has already attended a couple of lectures too. We have attended several Silver Screen films at the Odeon in Kettering of which I can recommend ‘Stan and Laurel’ and ‘The Green Book’ as being worthwhile the effort of seeking out.

We have had the company of both Mia and Harry several times, while their respective owners have been working, though not at the same time. Mia is naturally adorable and we are well used to her cheeky ways. Harry is a different kettle of fish, he is so laid back that he spends a great deal of time sleeping, but when he is awake he is keen on his walks, while being well-behaved on the leash, off it is another story. He was a racing greyhound and you can see why when he is released. At present, he has to be let loose in an enclosed space until he learns to come on call or I doubt we would see him ever again, he just flies! He has a lovely nature and enjoys his cuddles and strokes and it is still very early days for him, he is used to kennel routines and the company of other greyhounds, it is a very steep learning curve for all.

I have returned intermittently to my morning cycle rides, but a peripheral bone foot injury picked up before Christmas and a medial knee ligament injury picked up on the running machine on board the Columbus has made most physical activities a painful and difficult experience. Despite taking bucket loads of Ibuprofen and resting as much as possible, healing is slow. In desperation, I have had several sessions of reflexology with Doreen in her new penthouse apartment. Though I don’t think the sessions have helped my knee, my foot has shown a marked improvement since. Plus, it is a totally relaxing experience and I am sure is good for the inner me. I find driving particularly painful, though after 15 minutes or so the pain subsides to a tolerable ache. I have an appointment with the doctor on April Fool’s Day, and two days later I shall be driving down to Stansted to catch a flight with Sue to see Joan and Phil in Italy. I have hired a car for the week, I just hope that there is a marked improvement before then!

Charlotte has returned to her gardening job and is obviously enjoying being back among the plants. However, she has been experiencing hip pain for quite a few years now and this week she had a scan of her hips at a private hospital and the diagnosis was not good. The joints are showing evidence of arthritis and severe wear, with larger than normal gaps in the ball and socket joints. The specialist has diagnosed that she will probably be needing artificial joints by the time she is in her 40s and that she will require strong painkillers in the future. She is quite worried that when she does eventually require surgery it may not be available or speedy enough through the NHS. We shall see when the time comes, but we won’t let her suffer and if she has to go privately then that is what will happen.

Sarah went into Glenfield Hospital for an operation on her ankle, both ankles have been giving her problems the last few years and surgery is the long-term solution. The operation took place in the morning, and late in the afternoon, she was discharged home in a full-leg pot. She will be off work for eight weeks. However, the following day she had to return to the hospital as the leg was giving her great pain as it had swollen and there was no room inside the pot. The cast was split down the front, allowing the blood supply to be less restricted and ease the pain. She was again discharged back home. 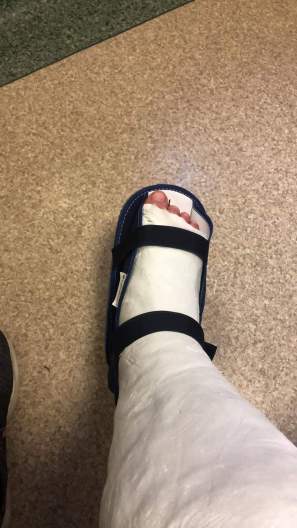 The following day Charlotte and I drove up to Newbold Verdon to see Sarah and help sort out her garden. Harry accompanied us. It was obvious by the drawn and pained look on her face that she was suffering from the operation, but it was reassuring to see that by the end of the day she seemed a lot perkier and more her old self. Charlotte was keen to clear the moss from the top of the patio roof and was soon up the ladder and jet-washing while I busied myself mowing the lawns, then cutting down a large bamboo that was shading the greenhouse. It was a lovely sunny day, just right for a spot of gardening. For lunch, we visited the local fish and chip shop and brought back our individual fayre to eat on the patio. Afterwards, Charlotte tackled the fishpond, cleaning it out and then seeding it with some bedraggled tadpoles, whose container Harry had knocked over earlier that morning. Hopefully, they would survive, but it looked doubtful. After carrying the bamboo cuttings and other bagged-up rubbish to the front of the house, ready for disposal, I helped Charlotte pull out a weeping willow and plant a magnolia in its place. Bent on destruction she then ripped out a good section of conifer hedge, before pruning a pear tree and moving back onto the roof of the patio. Doesn’t she ever stop for a rest I thought! Lee had come home from work and it was getting dark before we set off back to Harborough. Sue had picked Ellis up from school and given him tea while Suraj had taken Lucas to football practice. I had a very early night!!!!