There was a full cruise day after Aruba to reach the entrance to the Panama Canal, it was our goodbye to the Caribbean, it had been good to us; calm seas, blue skies, heat and some great views and memories.

We apparently picked up the pilot some where out to sea at 5.30am, the Canal is on both our bucket lists, but it did not include greeting this necessary element to the experience at such an ungodly hour. I was on deck with camera ready just after six am and it wasn’t quite light yet, though it was very humid. Sue went on deck shortly after, though I wasn’t until lunch time that we saw each other again.

I witnessed the passing under of the new Atlantic (unfinished) Road Bridge which is the first obstacle to negotiate before arriving at the first set of three locks. The Tannoy informed us that the bridge is soon to be opened at a cost of 350 million dollars. Leaning on the the railing at the bow of the ship, I mischievously whispered to the Scotsman standing next to me, ” Hrrrrm, we could have done that for 2.4 billion.” He agreed, “With a two year delay on delivery.” This third world country doesn’t know what it is missing.

As the light increased, the decks quickly filled up with eager bucket listers, even the crew started to assemble on the topmost deck where the off-limits radar equipment is sited. Everyone was anxious to capture an image that could be shown to friends and family back home that would impress with their photography skills, I use the ‘quantity method’, click away as much as possible and one is bound to be decent. Isn’t it?

The Gatun Locks are on the edge of the rainforest, its canopy is just a few metres from the waterway and the surrounding buildings. To raise the ships to a height sufficient enough to enter the central man-made lake there are three consecutive locks. They are big, but not big enough, we could see through the trees in the distance, evidence of a new canal that is being built that will take the new breed of mega-ships. I just hope that it doesn’t take the 800 000 deaths the present one took before completion. 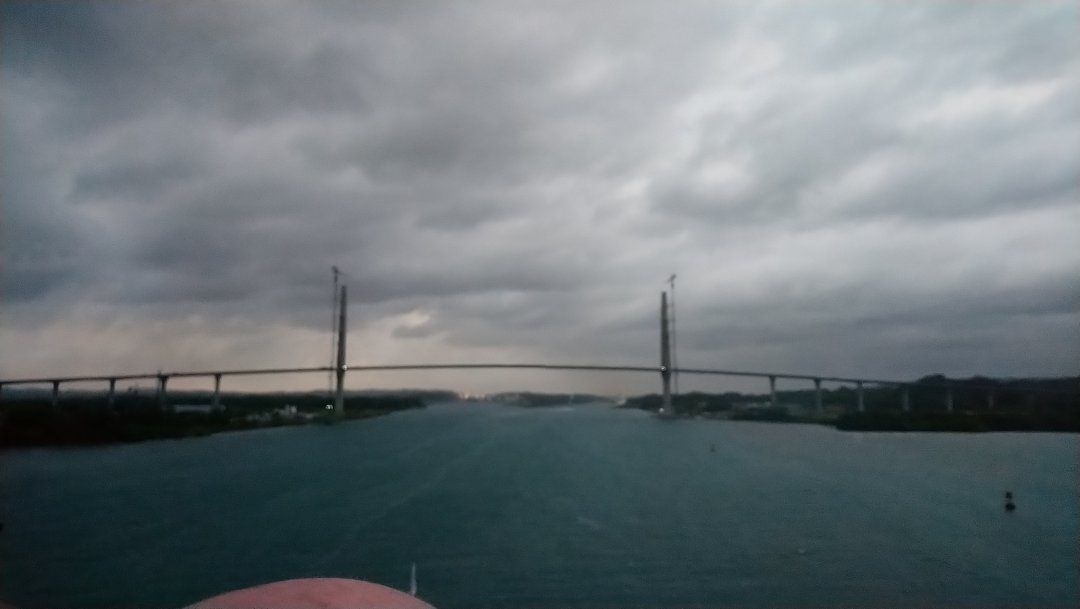 We are following the cruise ship Norwegian Star and she was soon to leave the first lock as we arrived to couple up to the ingenious machines that would first pull then drag us to a stop between the sets of gates. We watched and photographed as the Norwegian Star rose inside each body of water rapidly displaying more of her hull on each occasion. The transit through this first set seemed to enthrall all, no one left the decks to take part in the usual set of activities below decks. Each lock took 15 minutes to fill. Moving around from one side to the other and from the front to back to get that special photo, was not easy with the number of bodies around, most reluctant to give up their position, even to briefly move aside to let you pass. I didn’t play rugger for 40 yrs for nothing!

Alongside the locks are railway tracks, similar to those that you see on the mountainous funicular type except these run flat except for a short slope up to the next lock. Waiting for us on these tracks were four small trains, two on each side. We gently nudged up to a long dock, sited before the locks themselves before being held there by two tugs, front and back with water churning washing machine like from their rear in order to keep us steady while two of the trains on the one side squeaked and squealed up to us and attached two cables to our (in comparison) leviathon. From my height, the cables looked ridiculously thin and the vehicles themselves, rather insignificant. What do I know? As the cables tensioned we inched forward into the lock to be latched onto in similar fashion by two trains on the opposite side. They had no trouble tugging us and then halting us inside of the three locks. The ships are not permitted to use their own engines for common sense and safety reasons. It was fascinating to watch and as a distraction we had a couple of container ships transitting in the opposite direction through parallel locks to the side.

With the locks negotiated we entered Gatun Lake, once the largest lake in the world, but at present only coming in 3rd. The sun was quite fierce for our nearly eight hour steam across this body of water, finding shade while observing the passing jungle covered islands and shoreline became a priority for most but the foolhardy. Many had their binoculars out searching for signs of life in the canopy, but this appeared to be limited to a great variety of large and colourful birds, other wildlife appears to have rejected the CMV appearance fee as too derisory.

Our pilot kept us informed over the Tannoy as to anything of interest that we were passing. I particularly enjoyed the jungle prison that we quietly slipped by in which we were told the President of Panama is currently enjoying its facilities. I wonder who he upset? Around two thirds of the way we passed the small town of Gamboa nestling on the shore, seemingly more of a home for the large earth moving machinery than homes and buildings of the people who service the system. 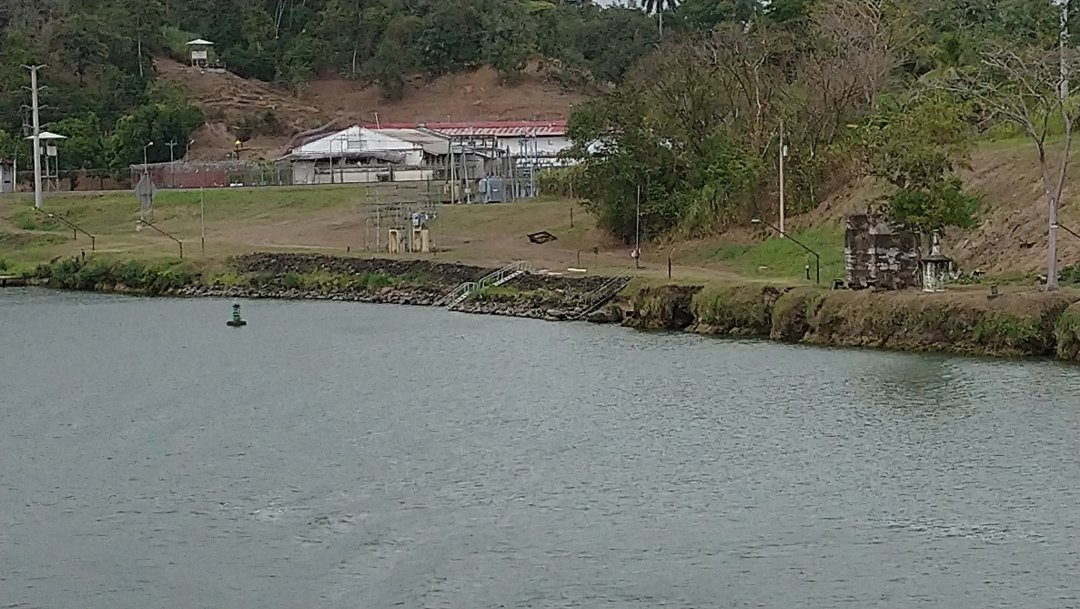 The next set of locks is the Pedro Miguel Locks followed by the small Miraflores Lake then the double Miraflores Locks before reaching the Pacific Ocean. By this time, there had been some thinning of the watching passengers, the restaurants had opened up for the evening and to avoid starving to death some felt it necessary to take on a few more calories. No doubt they were equally astounded at the sight through their dining room windows of the view of Panama City rearing up in the distance out of verdant jungle, a truly awe inspiring sight with the late afternoon sun glinting off stupendous towers of concrete and glass. Certainly, a statement that the human race can bend any environment to its will. It is huge!!!!!

As the sun set we sailed off under our final bridge carrying the Trans-American Highway into the bay and finding a space, dropped anchor among the countless dozens of other ships. We were stopping for several hours to refuel, before continuing with our journey. Some how a tanker found us in the dark and by 2am had disgorged its contents into our bunker and we went on our way.

Ahead lies two more sea days before our next stop in Guatamala, I wonder what the Pacific Ocean will have in store for us?