Checking out of our motels here hasn’t happened yet. We are asked to just leave the key in the room and shut the door when we go. No reminder as to when we are to vacate the room or seemingly a check on whether we have taken the TV, microwave or fridge with us! The Canadians out here are very trusting, but then so was Gwenda who would leave the house unlocked when we took her out. This used to be the same when I was a young lad in God’s own country, Yorkshire. The doors weren’t often shut, let alone locked during the day, unless you were going to the seaside for a week. Knocking on your neighbour’s door when you visited would never happen, that was far too formal for friends/neighbours. How things have changed in the UK, keep the faith Canada.

We left the key by the TV, shut the door and set off west on around a 4 hour leisurely drive to Schreiber. A railway town, so named after an Englishman who rose to the rank Chief Engineer in charge of railway construction in Canada. He was rewarded with a knighthood and a town named after him.

As in the previous leg of our journey we met very little traffic, surprising because this was Monday, a working day. The day was cloudless and the scenery sliding leisurely by became increasingly more interesting. There was increasing signs of habitation; camp sites, little pockets of houses and lakes with cabins. We passed through Jellicoe, but saw no cats, then Beardmore and saw no beards, but as we entered the forest covered Palisades our journey took a turn for the better. No more ruler straight ribbon of tarmac stretching from horizon to horizon, we now wound along the shores of lakes on roads squeezed between water and mountain, such a pleasant change from the day before.

We stopped for the toilet in Nippigon at a gas station and discovered that they vended coffee for free, we had two! I took the time out to wash the windscreen as the insects had painted it with their internal workings as they mindlessly played a game of chicken with the Nissan Rogue doing 90kph. There was only going to be one winner there, but they still kept on coming. Amusingly, I discovered I had half washed the car parked next to mine before noticing that it was Kia, in my defence they were the same colour!

From Nippigon to our accommodation in Schreiber we were heading east again, along the shore of Lake Superior. Again, a refreshing change of scenery. The settlements we were passing through were very pretty and I guess a very desirable place to live for a Canadian.

After checking into the Villa Bianca Inn situated alongside HWY 17 and close by the Trans Canadian Railway depot, we took a drive through the town, stopping at the Railway Museum to find it shut, it appears nothing happens for tourists outside of the large cities until July 1st. We searched in vain to find a local restaurant for lunch, but eventually settled on a KFC.

Next, we drove down to Schreiber beach. An attractive place, we spent quite a bit of time exploring the shore, rocks and the little stream gurgling into the lake. We came across a swarm of large yellow butterflies drinking from a patch of damp sand, we took quite a few photographs of them before returning to the car.

Driving further east along HWY 17 for a few more kilometres we visited Aguasabon Falls and Gorge. A spectacular and thunderous fall of water into a narrow gorge, reached along a raised walkway and viewed from a platform set into the cliff to one side. The spray billowing from the cascade created a rainbow that I hoped would show on the photos that I took. Moving on to Terrace Bay we climbed the lighthouse located just off the highway and had a great view over this small lakeside township. We took a turn around the local shops before driving down to the beach. It is here that the Aguasabon River enters Lake Superior via another thunderous waterfall. We walked from end of the beach to the other before taking the trail through the trees to the top of the waterfall and some more photos.

Returning to the Villa Bianca Inn we rested awhile then drove west to a small hotel which had a restaurant, recommended to us by a local. However, many food establishments in Canada close on Sundays and Mondays (out of season) and this one was one of them. We about turned and dined again on KFC. Waiting for our order to be filled, ironically I watched a news item that headlined, “Over 70% of Canadian men eat unhealthily.” I am not surprised, there appears to be no choice for them on two days a week.

We dined on chicken and chips with peach wheat ale in our room and watched TV; it’s the Monday night Canadian way. 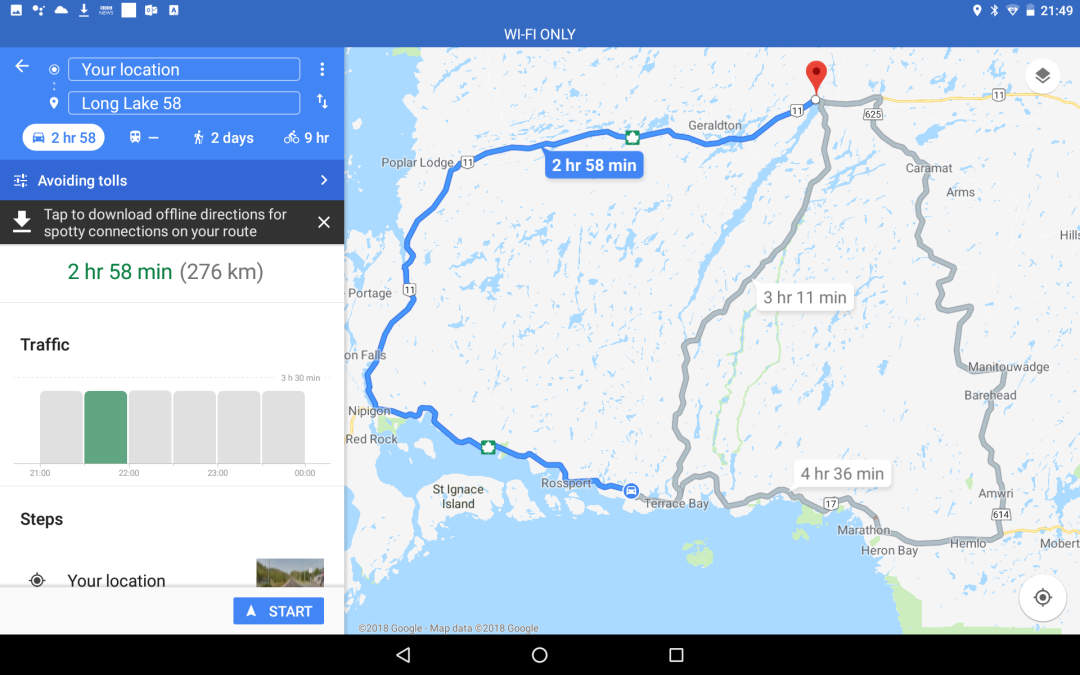