Breakfast was different. Sue, Sean and I were sat outside Subway next door to the hotel, waiting for it to open at 9am. Sean clutching a breakfast voucher for the three of us acquired from the reception of the NU hotel. We were the first customers of the day and were due to receive a sub containing egg (omelette) and cheese with our selection of salad fillings, we supplemented it with bacon. We sat down expecting our order to arrive quickly. The place slowly filled up, Dominic and Caitlin joined us and placed their order as did a few others. After quite a while we noticed that everyone else seemed to be receiving their order, on enquiring where ours was we discovered that she had forgotten it! How do you manage to do that, when we were the first and only customers there for quite a long time? Breakfast was disappointing.

Afterwards we caught a shuttle bus to the nearby train station where we caught the frequent connection into terminal 1 at the airport. Locating the Budget car rental desk both our groups gave over our details and found our cars in the carpark. We decided to upgrade as we were doing quite a bit of mileage, and this soon turned out to be the right choice. Wishing each other a good trip we went our separate ways.

The morning had been bright and sunny, but as we drove out of Toronto it became progressively cloudy. Our first stop was in Barrie to enquire at the Tourist information and decide whether to go via North Bay or cut through Algonquin Park. We opted for the slightly longer route through the park.

Next stop was in Huntsville for lunch. We both had a very filling salad at a Harvey’s fast food outlet, before driving on under increasingly leaden skies. We had chosen our route as we thought it would be more scenic, but very soon the showers that the radio had informed about, arrived. It then lashed it down for the next 3.5 hours and we saw very little scenery, though we did stop along with other tourists to watch a black female moose eating at the side of the road. We were glad we had updated the car! A much firmer drive on wet back roads than the small compact option.

We arrived at Gwenda’s around 6.pm and it was still raining, and it did for the rest of the night. Though Gwenda’s eyesight is suffering from macular degeneration, she is still able to see well enough to get about and her mind is just as sharp as ever. We spent the evening chatting and I took a brief respite from the conversation to fetch a pizza from Goodfellas in the town. After consuming the rather oversized fayre, Sue and Gwenda continued catching up with family news while I looked at and edited a document that Jamie had sent me after his early morning phone call in Toronto notifying me that he had sent it, and please could I look at it before Tuesday? 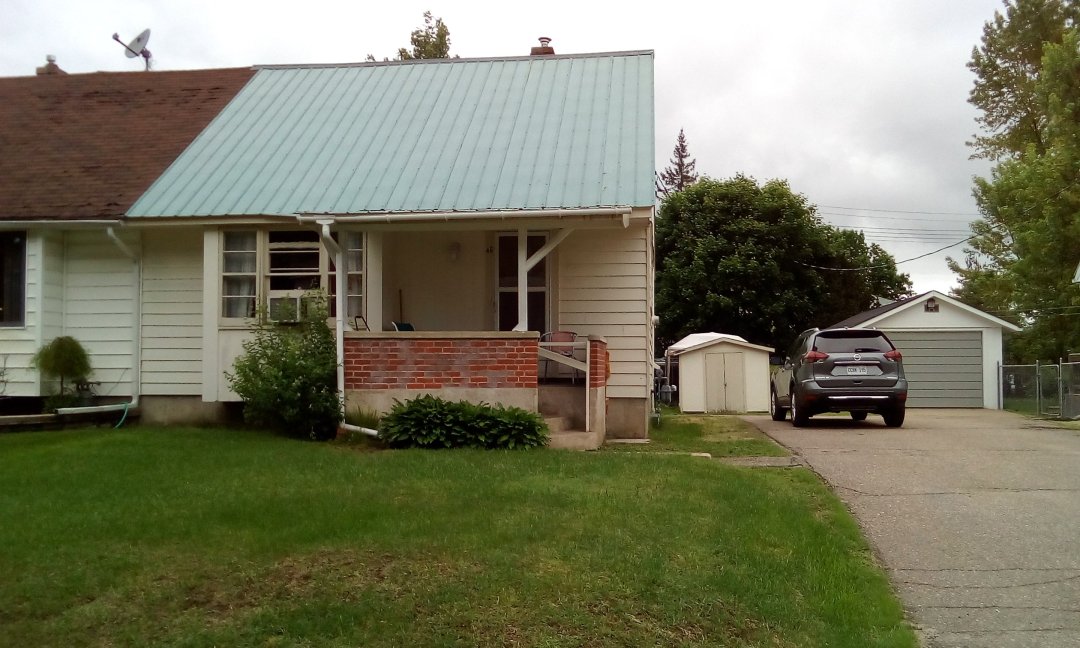 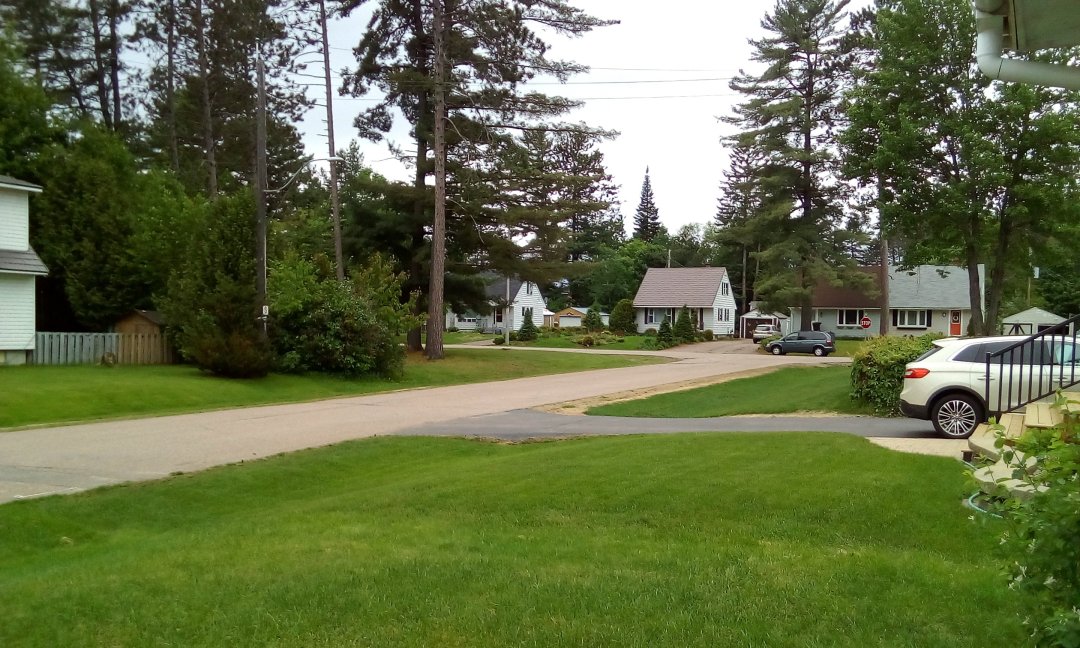 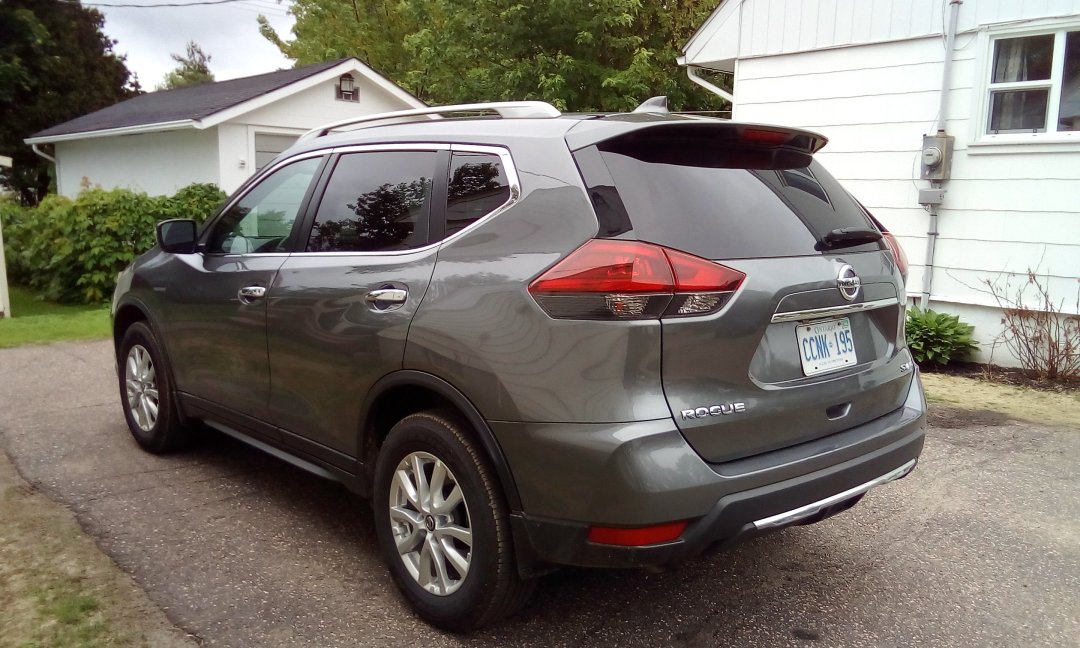 It was still raining when we went to bed around 10pm. The raindrops clinking on the metalled roof of Gwenda’s bungalow would sooth me to sleep I thought, and it did. I find the sound of heavy rain quite sleep inducing, unfortunately Sue does not.

It was still raining the following morning and after breakfast I drove to a nearby cafe which had internet access. Gwenda does not have Wi-Fi so this was my only option to send Jamie’s edited website document. Unfortunately I couldn’t get my tablet to send, though my phone did access Messenger and I conversed with Sarah for a while about whether to have a proposed operation on her ankle or not.

A little later we took Gwenda grocery shopping to ValuMart in the town, before returning for a light lunch of bread rolls and yogurt.

During a rainy afternoon we drove to Ryan’s to have a mooch around this fascinating tourist shop. Ryan was sat with his dog Holly and I chatted with him and stroked Holly while Sue and Gwenda considered every item on display at least three times, in the end buying nothing. Afterwards in the car, Sue assured that she nearly did purchase some arrow heads and moose teeth, but she wasn’t sure that they were authentic. Hmmm, authenticity, always has been a tricky one to judge, best be safe than unauthenticated!

We next visited another tourist shop with rather pricier objects on display before moving on to Hortons again for coffees and I tried again to send Jamie’s document. My tablet refused to trust this internet access point, but on removing the security filtering I had success. With the rain still falling we had a short drive down to the river frontage, but the visibility was poor so we returned to the warmth and dryness of Gwenda’s bungalow.

Unusually, Sue had a nap while I talked to Gwenda until it was time to depart to a local hotel restaurant for our evening meal at the Bear Pit. On finishing our food, for a spot of entertainment we watched a line-dancing group perform in an adjacent room.

Returning to the bungalow we passed the evening collectively doing crosswords until it was time to climb the stairs to sleep.

Sue and Gwenda had been up well before I made my way downstairs at 8.30am, I had woken around 7am but at that moment the rain came and lulled me back into dreamland.

After breakfast we attempted once again to venture an amble along the board walk that stretched along a scenic part of the Deep River river frontage. After parking by the memorial garden the three of us braced ourselves under grey skies against the chilling breeze and set off purposefully. Soon Gwenda urged us to go on ahead and let her make her own pace and we did. We made it as far as the small marina before the first squall whipped across the water promising heavier rain to follow before we opted for a return to the car and shelter. We were surprised to find that Gwenda had put a spurt on and caught us up! Leaving the two of them sheltering in the Yacht club I returned to the car and drove back to pick them up.

After a lunch of salmon sandwiches we again drove down to the river (we are persistent), this time our destination was the popular public beach where Deep River residents teach their children to swim in a shallow section of the river. It has a playground to amuse those too young to learn how to avoid drowning. As expected, the place was deserted, though there was a JCB in operation, obviously getting things ready for warmer and calmer days to come. The river was darker than this morning and the waves were being whipped up into breakers by a bitter wind. We didn’t stay long.

We continued upstream to Pine Point. Sue was keen to re-visit this spot as 28 years ago we had played with Charlotte and Jamie on the very pretty beach there on a warm sunny day. Today was a very different scenario and after a few hurried photos we returned to our mechanical haven.

Next stop was ValuMart to get the supplies for our evening meal, BBQ chicken, potatoes, sweetcorn and coleslaw.

Back at the bungalow we settled down for the rest of the day, grateful that the inclement Canadian weather hadn’t been too bad to stop us from venturing out altogether, but the phrase “Mad dogs and Englishmen” comes to mind.