On the 26th of Aug. we had Paul and Louise, Jim and Brigitte and Sean for a BBQ. The occasion was the Women’s Rugby World Cup Final. I unveiled my quarter pounder beef burgers and satisfyingly they seemed to go down rather well, though unfortunately our girls were out beefed on the field of play and lost to New Zealand. Oddly, it was the men in the party who watched the game on TV with customary beers at hand, while the ladies in the party preferred to sit outside and chat. After the match we all relocated to the beer house in town and toasted a brave and valiant effort by our girls against the ‘dark-side’.

Early in September, Charlotte and family took themselves off to France for 5 days. The 2nd was Charlotte’s birthday, the 3rd was their wedding anniversary and the 4th was Suraj’s birthday. Very convenient. The weather was reasonable and they managed to to see quite a bit of the local countryside sampling the local cuisine at every opportunity. Bread and ice-cream seemed very popular and appeared in many Face-book photos.

It had become a daily routine taking Mia for long walks through the Leicestershire countryside stopping off at lunchtime in a variety of hostelries and restaurants for refreshments. Occasionally, we would be accompanied with Jim and his dogs, Harby and Showby. They get on well with Mia, are very obedient and a good influence on her. Late each evening, we would take a last walk in the park and meet up with other doggy friends and play ball until the light failed us. While her owners were having fun seeing the sights of South Korea, Vietnam and Thailand on their honeymoon, she was equally having fun, sniffing her way around Market Harborough and discovering many new spots to linger awhile and savour the odours of I know not what (thankfully!)

On the 9th Sept, Sue, Charlotte and I went to see an ABBA tribute band at the Three Swans in Harborough. Paul, Louise and Sean also went but were on different tables. The concert was as expected, great fun, thoroughly enjoyable and the excellent three course meal served prior to the performance, added to a brilliant night out. Sean’s wife passed away a few years ago and it was pleasing to see that he hit it off well with one of the women diners at his table. Such is the power of Abba that this has developed into quite a relationship.

On the 15th I picked up Sarah and Lee from Heathrow. They were very tired after flying back from Thailand and were eager to see Mia again. They didn’t stay long before heading home to Braunstone. I followed a couple of days later with my mower to hack down the forest of a lawn that had grown whilst they were away.

The following day, Sue and I went to see a Genesis tribute band in Kettering. We were accompanied with Jim, Brigitte, Paul and Louise. Another enjoyable evening, though on the journey back to Harborough there was a very thick fog, making driving quite treacherous.

Ebay can a great way to grab a bargain, but you do have to be careful. Looking on local ebay (pick-up only) I spotted a quantity of picture framing wood for sale, I bid on it and £7 won the auction. Details said the lot was in excess of 3000m, but I thought that this was a typo error and should have been 3000mm, just right for the few paintings I was going to frame. The lot was just half a mile away. When I went to collect I found it was no typo! My little Fiesta could not carry that amount of wood. Luckily Jamie had a friend with a vehicle that could and that weekend and 7 runs it was delivered into my garage. I have since relocated it onto my woodpile behind the garden shed. This winter we shall be warm! Such a shame as it is mostly Italian picture framing wood and very elegant.

On the 21st, Uncle Stanley was due to have a much-needed cataract operation. I rang him the day before to check that he had remembered, but everything seemed to be organised. However, I knew he was very nervous about the operation and hates hospitals with a vengeance, I guess I wasn’t surprised to learn a few days later that he changed his mind at the last moment prior to entering the operating theatre. There had been a half an hour delay and I am afraid he had lost his nerve. It’s a shame, but he’s 96 years of age and I guess he has earned the right to live the rest of his life the way he wants to. But, I wish I had been there to reassure him and he might have gone ahead with it. We will never know.

We had booked our flights to see Joan and Phil on Ryanair many months ago, so on the 23rd  I got up early (6am) to check-in and print our boarding passes, this was the earliest opportunity. Checking my emails, I was greeted by one notifying us that our flight in three days time was cancelled and that we had the options of accepting a refund or rebooking at a later date.

Switching on the radio I discovered that we were one of many thousands that had their flights cancelled due to a major cock-up with timetabling and pilot holidays. Luckily, I was up bright and early and discovered all this before most others that were affected. It proved futile to contact Ryanair, so I opted for a full refund then made another booking for the following week (after first checking that this was okay with Joan and Phil).

A full refund appeared in my bank just 24 hours later. Well done Ryanair. I have since claimed the difference in price and also compensation. Though this has been acknowledged, I am not holding my breath. I seem to have been one of the fortunate, unfortunate ones.

We flew to Italy from Stansted after staying the night at the Days Inn, just a few minutes away from the long stay car-park. It was a very early flight (6.20am), but it left on time and though we had been ticketed  into separate middle seats on the aircraft, this turned out to be an advantage. We both had seats that were vacant on either side so could lay out and get some sleep. On booking the flights I had rejected the option to pay extra and select my seats, leaving it up to the system. Not surprisingly we were allocated rows 11 and 26, at either end of the plane and given centre seats. Again, not surprisingly a pop-up noticed we were not sat together and offered to change this, at a price. Well Ryanair, it is underhand to deliberately do this in order to squeeze a little extra cash out of your passengers. I guess most people on the flight were couples and by deliberately programming Sue and  I to centre seats, many couples would have paid not to be split, thus leaving the seats next to us vacant.

At Ancona airport we were met by Joan and Phil on a lovely warm and sunny day. An hour and a half drive later we arrived in Santa Vittoria. Joan explained that they had just gone through an excruciatingly hot summer with the temperature well into the 40’s and that they had not been able to spend much time in the garden and the plants had suffered in the heat. However, they had managed to keep a lovely display of flowers in pots around the house.

Joan, as always, demonstrated what a good cook she is, and also this time I discovered that pasta and tomato sauce are Phil’s forte. We ate very well during the week and my trouser belt soon needed to be loosened!

As this was Sue’s first visit they took us on morning visits to the lovely Medieval hilltop towns that I had visited years ago with Roger. I think Sue particularly like mooching about in the local markets. Disappointingly, despite looking hard she failed to find a Christmas decoration for the tree as a memento of our visit.

We were very fortunate with the weather so in the afternoons I took Sue for several walks into the valley and up into the town of Santa Vittoria. Annoyingly on one particular expedition, we were chased by a couple of small dogs who raced out of a house and Sue suffered a nip on the back of the leg, before the owner came out and took them away. There was no apology.

Many of the buildings in Marche have been affected by the many earthquakes last spring and are either condemned or supported and awaiting repair, thankfully Phil and Joan’s house, set below the hill top town of Santa Vittoria suffered hardly any damage compared to those just a few hundred metres above. 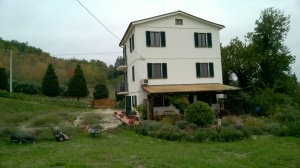 We did have a couple of excellent evening meals up in the town with Phil and Joan and on one day, lunch down at the lake where we met a friend of theirs. He was an American who had Italian roots. I think he had been living locally for around 16 years and he certainly didn’t look his age.

We would spend the evening eating, chatting and listening to Phil’s vast music collection (which I now have on a hard drive). Thank you Phil.

We slept very well in Italy and since returning we have ordered a new mattress and I guess blackout curtains will soon appear!

Sadly, after a week we rose at the crack of a spectacular dawn and after being driven back to a foggy Ancona, said good-bye to Joan and Phil. We shall see them again on their Christmas visit to the UK.

Since returning from Italy Jamie and I have booked  a mini road trip to Mallorca in November. Ryanair have apologised for cancelling our flights and provided us both with a £80 flight voucher, so Sue and I have booked to got to Thessaloniki in Greece next March. Thank-you Ryanair, again.

On the 10th Oct I had a scheduled Aortic Abdominal screening at our brand new St.Lukes Hospital. As I expected, the scan was clear.

During the last couple of weeks, Mia has been quite poorly. After a visit to the vets, tablets and injections she seemed to recover, but she has regressed the last few days.

The Rothwells are soon to be off to Thailand for a couple of weeks over half term.

Sarah has booked to go to Ibiza in June with some girlfriends and in January She and Lee are off to Berlin in January, brrrrrrrrr!

Ashton is on holiday in Mallorca with her family.

Lucas is in year 6 so will be moving schools next year. The last couple of weeks he has been visiting schools in the area to hopefully find one that he likes. It seems a worrying time for Charlotte, but only time will tell where he is allocated.

Since returning from their travels, Sarah and Lee have spent a day on their yacht. They have gutted the inside of it , cleaning/sorting/discovering all sorts of nautical things. I guess they are keen to put it into the water, but the season seems against them.

Sue’s sister and husband Paul, have finished with the USA and have moved into Canada. They are due to visit aunt Gwenda before returning to the UK in November.

The white grapes have all been picked. It is a bumper crop this year, and it took three full days to separate the grapes from the stalks!!! Very, very, very boring task. The juice is now glooping away merrily in many containers in the kitchen.

Breaking news: Today, Ryanair have compensated me with 500 euros. Well done, Ryanair. I shall fly with you again.