While Jamie was enjoying the sun and heat of Tenerife with his friend Bill, back in the UK we were being treated to a typical British summer. A few promising days somehow got mixed into a miserable cavalcade of showers, cool temperatures and wind. At least the garden and allotments enjoyed the regular dousing and responded with rapidly maturing vegetables and fruit well before their usual time. Sue took charge of picking the raspberries, goose berries and currants and then had to move on to bottling beetroot in readiness for the winter. The greenhouse kicked into overdrive and the tomatoes and cucumbers joined the throng. It is lucky that Charlotte and Ellis love cucumber and devour them like bags of sweets!

On the 18th Sue took a day off from picking and bottling to attend Lucas’s and Ellis’s sports day. It was a rare hot and sunny day, just right for children to run around and have fun. I find the non-competitive sports days favoured by Rothwell school as rather pointless and quite annoying, so did not attend.

The following day, Pip (Sue’s sister) arrived by train from Buckfastleigh in Devon. Unfortunately, she brought the rain with her! First, Sue took her to visit Sarah, Mia and Lee and they managed a delightful excursion to Bradgate Park where they managed a tour of the ruins of Lady Jane Grey’s house.

On the 20th July they caught the bus into Leicester and visited the Richard 3rd exhibition, the Cathedral and the Guildhall. They followed this up with a visit to Charlotte’s on the 21st.

Pip returned home on the 22nd. Jamie arrived back with a heavy sun tan and a spare tyre from his ‘All Inclusive’ jaunt.

It was our wedding anniversary on the 24th and we celebrated it with Lucas and Ellis with a lunch of fish and chips in Stamford. We did a trial run to Normanton Church on Rutland water to check out times and parking in readiness for Sarah’s wedding. Next, we visited the reception venue before checking out the hotel in Stamford where we will be staying after the celebrations. On the way back to Harborough we detoured to the marina and found the yacht that Sarah and Lee have recently bought. The boys loved climbing all over it and can’t wait for their first sail on her. 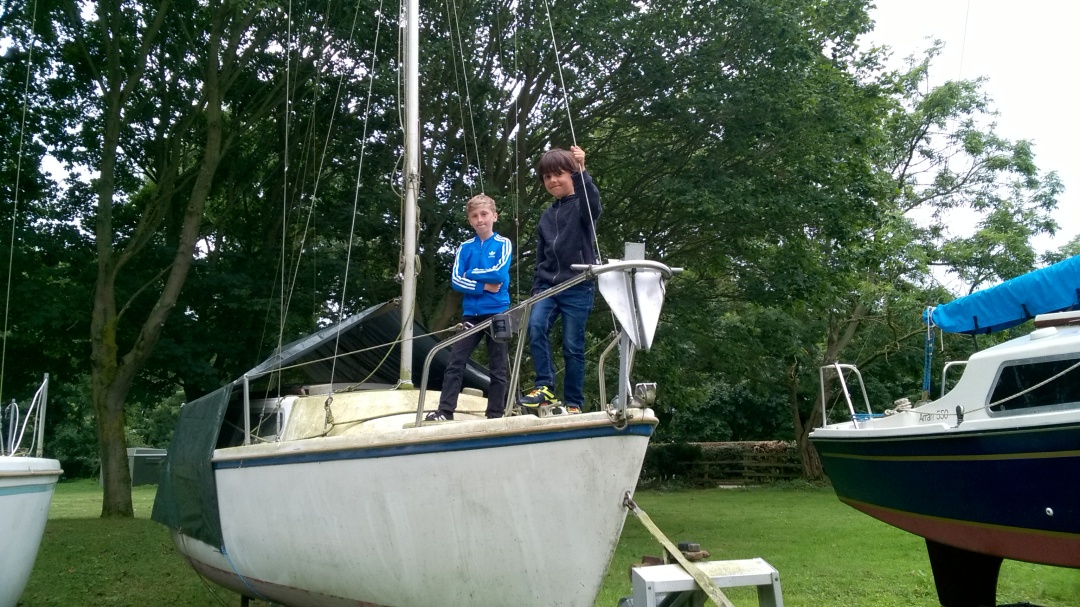 The next day Sue took the boys on an organised coach trip to Knebworth. Again, the weather smiled on them and they had lovely day, visiting the house, dinosaur trail, maze and sculpture trail. It was a very full day and they were all exhausted when they returned. They all slept well that night!

After lunch the following day, Sue and I drove to North Wales and checked into the Bryn Howel Hotel near Llangollen. It is the place where we first met each other in 1972 and I guess it was quite appropriate that we stayed there near to the date of our wedding anniversary. It was a sunny but windy day and late in the afternoon we stretched our legs on a walk to the ruined castle above the town. We ate that night in the hotel. 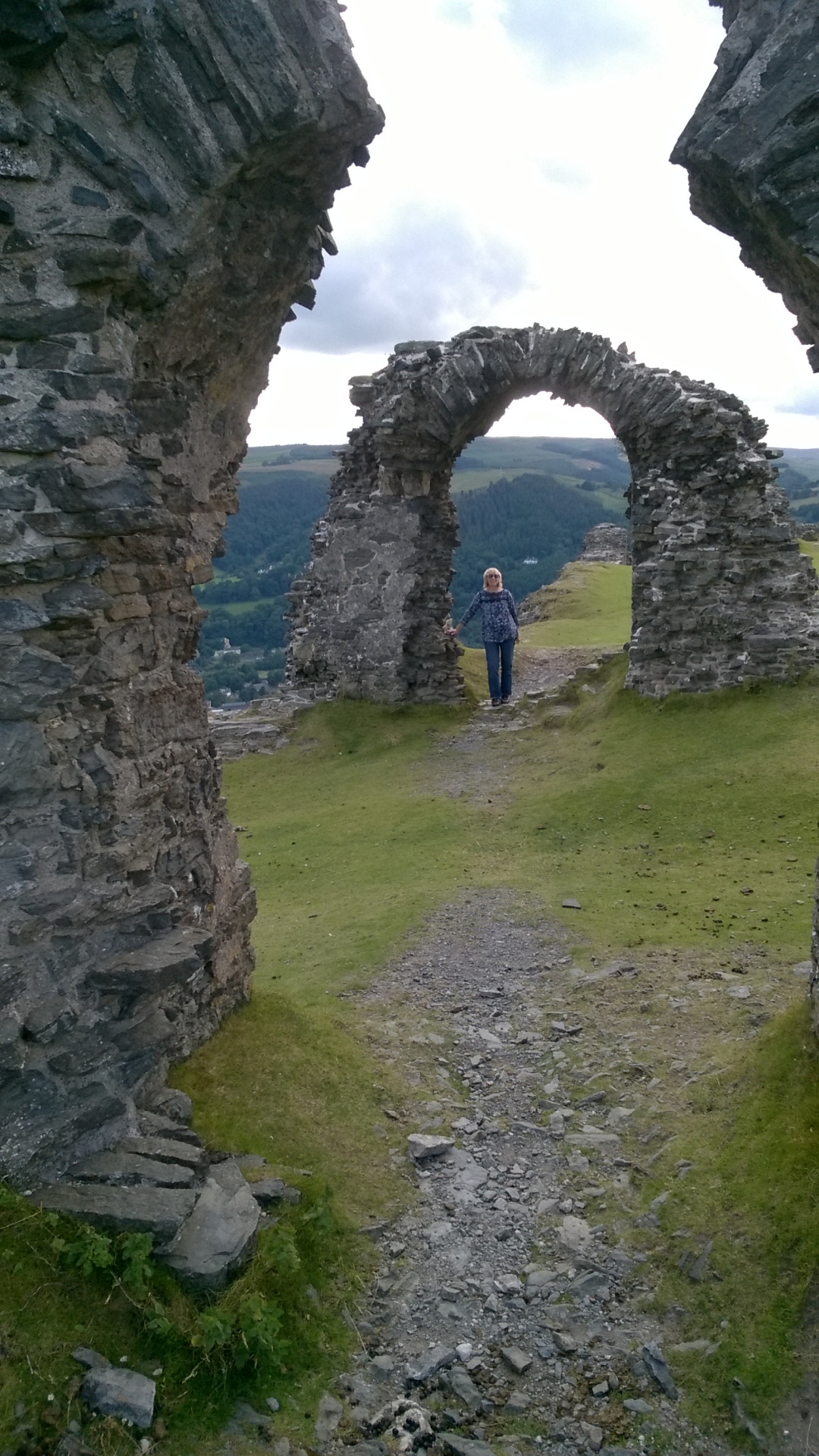 After a late breakfast we drove to the Crematorium just outside Wrexham. We attended the funeral of my cousin, Jeff Vaughan. We are the same age and often when the Palmers visited our Welsh relatives he was the one I used to play with as a little boy. He owned his own building company and for many years lived in Spain. I last saw him when he attended my mother’s funeral. He lost his battle with brain tumours.

After the funeral and tea we returned to Harborough. It was nice to see my Welsh relatives once again, but I guess it is the only on sad occasions such as this that they now gather together, and that in itself is also regrettable.

On a lighter note, the following Saturday Lee and Sarah came with Mia. It is their custom to visit the fireworks competition held at nearby Stanford Hall. Sue and I looked after Mia while they watched the displays in atrocious conditions. The rain hammered it down all night, I am surprised they managed to see anything at all! In the past they have camped overnight, but wisely this time they came back around midnight and took a disappointed Mia home.

The start of August was no different to July. Optimistically I bought an awning for the back patio (well, it is summer!), I mounted it on the wall above the dining room window and extends  by way of a winder. Jim came to give me a hand to mount it on its brackets as it is far too heavy for one person. Annoyingly it was far to windy to open it and give it a test. That had to wait for another four days!

On the 5th Jim and I attended the Foxton Cider and Sausage Festival. Though we were planning to cycle there, Sue had to take drive us in a thunderstorm.  The event obviously didn’t do as well as it would have done if the weather had been better, but everything has a silver lining. We got chatting to the guitarist/singer who had been booked to entertain the throng, but had to make do with us two and a few others. It turned out that he had once played with Deep Purple, though he we couldn’t cajole him into playing ‘Smoke on the Water’! We later got chatting to an Aussie, who turned out to be a professional house sitter. He and his wife travel the world. He is presently in nearby Welford. So far this year he has been to France Belgium, Greece and Italy. Now there is a thought.

On the 10th I was picked up at 6am and travelled with Sean, David Tomlinson and Rick to Snowdon. Rick had flown over from Texas (where he lives) to attend the funeral of his father. He was staying with Sean and they had decided to climb Snowdon and invited myself and Dave to accompany them. We had just had two days of rain, but the 10th was a gorgeously warm day.

We stopped in Llangollen for breakfast before driving to Pen-y-pass. As expected the parking at the start of our walking route was full and we had to drive on to a carpark in the village which was 3 miles away. There we caught a bus back. Under clear blue skies we set off along the Pyg Track, joining the human conveyor belt winding its way upwards.  We chatted to fellow walkers that we passed, cracking jokes and generally larking about until the steepness and rugged terrain silenced our antics. With many stops along this most difficult of routes up the mountain, we eventually reached the top of the zig-zags to find ourselves in cloud. Carrying on to the summit station and Trig point we took photos before visiting the centre for much-needed water and toilets. 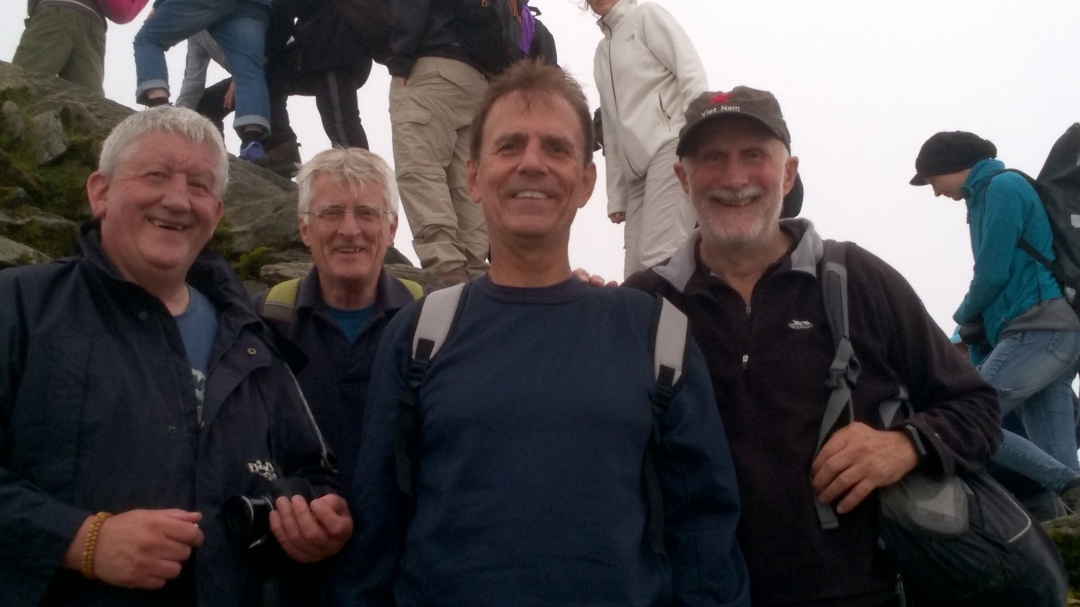 The return journey was by way of the Miners Track. A longer but much easier route than our way up to the summit. We descended again in sunshine. Rather strangely, on our descent we passed 100’s (yes, 100’s) of Muslims. The men dressed in sensible shorts and T-shirts, but the women in full Burkas, with their eyes peeping out of slits. Weird.

Then, even more stranger we started coming across 100’s (yes, 100’s) of Jews. The men and boys sporting skull caps and ringlets, dressed in black coats, white shirts, black trousers and shiny shoes. The women were dressed in frocks with purple turban like hats. Weird. Both sects seemed to be having fun on their steep hike, but I do wonder if this was planned? Neither group seem to react/respond to the other and suppose that was a good thing? Many of those that we passed on their way up were never going to make it to the summit as their dress was inappropriate for the final stages. We came across large numbers of them sitting in their ethnic groups half way up alongside the path near the lakes. I guess these were the sensible ones.

It took us 6 hours to reach the summit and return.  We stopped for a very pleasant meal at a pub around an hour into our journey, before eventually reaching Harborough at 11.30pm.

A batch of home-brew beer that I had started 3 weeks ago was ready on the following day. It tasted quite pleasant, but nothing exceptional.

On Saturday I painted the balcony decking with some exorbitantly expensive paint before walking with Jim and his dogs to the pub in Harrington to recover.

On Sunday, Sue drove over Tenbury Wells to pick-up Sheila. She is staying with us for a few days and is also attending Sarah’s wedding on Wednesday.  I carried on painting the balcony.

The next blog will be all about Sarah and Lee’s wedding.