Our journey to Terminal 2 Heathrow went without a hitch. The M1 and M25 were fairly quiet, probably do to it being a Bank Holiday sunday and that we left Harborough at 1pm. Remarkably we only saw two caravans and hardly any lorries all the way to London.

We parked the car in a new venue for us, the Easy Hotel, a franchise of Easyjet. The hotel itself looked pretty basic, but the car park was made of good solid tarmac and looked as if it would support the Fiesta for the duration. We had to wait around half an hour for our bus pick-up, but a driver on a drop-off run only, took us to the airport as it was the end of his shift. Such kindness.

Avianca only support self check-in. I agree that the process IS pretty straightforward, as long as you are willing to give it 100% of your concentration, be under the age of 30yrs and enjoy sticking, very sticky paper to suitcases. The machines allocate you seating and this is why Sue and I ended up sitting behind each other in the middle aisle of the plane. Very annoying. We were later annoyed when the same process was thrust upon us when we bought a meal deal at WH Smiths in departures. As we were freshly practised, this time we managed to purchase the correct items (after a lot of confusion and heart searching and questioning whether we have the will to live in this ‘do it yourself” techno world). We ate our food sat next to each other, in seats of our choosing.

Our flight wasn’t until 10.40pm, so it was a long wait. It is amazing how long you can sit, sipping a pint of beer. The Avianca flight to Bogotá thankfully left on time.

The 10.5 hour flight was not a pleasant one. Both of us cramped between two other passengers on either side and hardly any leg room. Thankfully the food was great and we did manage to get some very restless sleep. We landed slightly ahead of schedule and found our transit gate without much problem. Again the flight left on time, but this time we had leg room and were sat next to each other. Oh joy. They fed us a passable breakfast on the 2.5 hour flight into Lima.

Immigration, security, and baggage reclaim went like a dream, as did meeting our transfer where we met with quite a lot of ‘soon to be’ new friends. Then it went a bit sour. We were forced to wait a long time on the transfer bus while four of our group were searched for. It eventually transpired that they had missed the connection in  Bogotá. We left for the Jose Antonio Lima hotel situated in Miraflores. A lovely well situated 4 star establishment just a few blocks from the sea.

The rooms were not ready so as a group we went for a wander, first to the beach and then Sue and I went off to explore the town itself before returning to the hotel and checking into our room on the fourth floor. 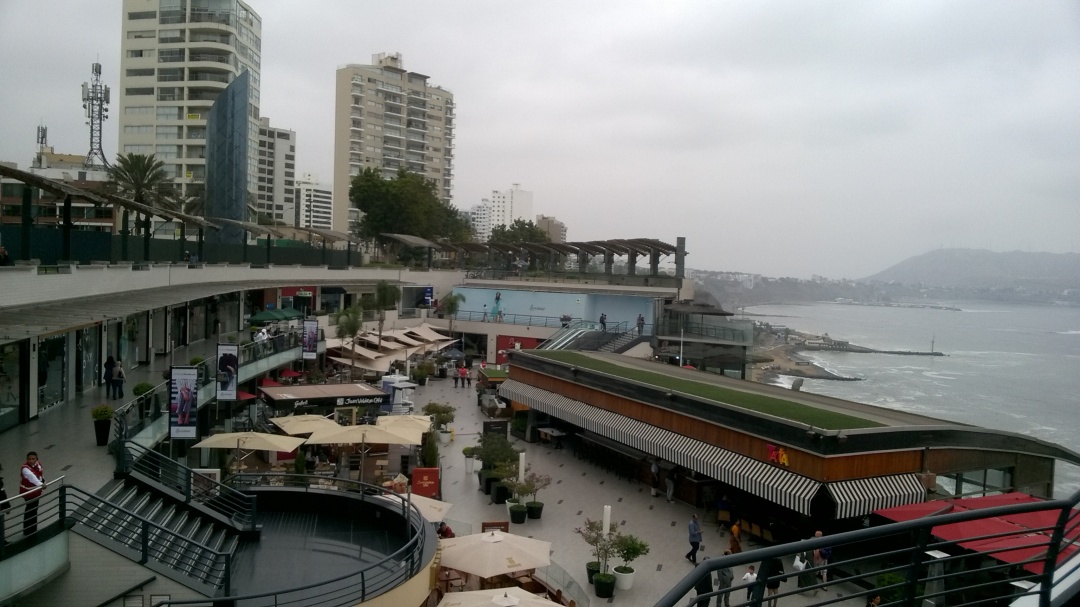 After showering and a change we set off again to explore. First we exchanged some money and then hit the beach again. We spent the afternoon wandering and discovering; Pooh Bear, some paragliders taking off from the top of some very high cliffs and a light house. We stopped awhile and savoured some very flavour-some hot chocolate  taking in the very hazy views. The little islands we had glimpsed off-shore earlier in the day had now disappeared in mist and the humid heat of the morning had made way for some rather cooler air. As it began to darken we made our way back to the hotel for a much-needed rest before venturing out for our first authentic Peruvian meal.

We had discovered a little plaza next to a large municipal building which conveniently had a very picturesque park alongside on our last foray into the city, there were a few traditional Peruvian restaurants there and we made a mental note to return and sample their delights. This we did. Sue had a chicken Peruvian thing and I had a grilled Peruvian fish thing. They were tasty and satisfying authentic. We enjoyed our meal watching the locals promenade and in the park a magical little market had popped up attracting all sorts of characters. We had been recommended a drink called a Pisco Sour by our tour organiser, it had to be sampled. Now I am a beer person. I don’t like spirits or cocktails, they are a complete waste of time as they are 1. Too small and 2. too quick to drink. Pisco Sour is cocktail sized but has the mentality of a pint of beer. You don’t drink it quickly. The sharpness hits the palate first causing the lips to recoil in horror, followed by a warm smooth, mouthy, reassuring glow of all is well, until the heat and gaspingof what ever alcohol is used, sears the throat, contorting the face into a comical smirk that does indeed cause a little titter of pleasure. WOW. I like this drink and no, I do not want to know what goes into it (that would be too dangerous), but I shall repeat this Peruvian Zip Wire again! Sue didn’t like it.

Afterwards we had a canter around the park market before returning to the hotel and bed.

Like most cities (except those in Canada and New Zealand) come alive when the sun goes down and Lima is not an exception. What a vibrant and exciting experience it is to walk its  streets when the population come out to eat and play. I liken it to Kuala Lumpur, and that is high praise.