We ate that evening at a take-away outlet called ‘Roast’. We had seen them nearly everywhere but had dismissed them as being a NZ oddity, for local stomachs only. What an experience! A fast food outlet that specialise in roast dinners, beef, chicken, pork or lamb. Take-aways go in a plastic tub of varying sizes (depending on the size of stomach), and eat-ins are served on crockery. The roasts are slightly different as you get a selection of potato, pumpkin and Kumara. A huge ladel of peas is added with  lashings of rich brown gravy and I had a good splashing of mint sauce as I selected the lamb. Wonderful and very popular with the locals.

We spent the rest of the evening sipping local ales in the Irish bar and watched the  Crusaders beat the Hurricanes  in a packed bar. From what I saw the British Lions have nothing to fear from the provincial sides. It seems that it is the fashion to dress up in fancy dress on a Saturday night. We were sat at a table next to Luke Skywalker and a very fetching Princess Leah.

I found it rather chilly during the night and we had to put on the heater. 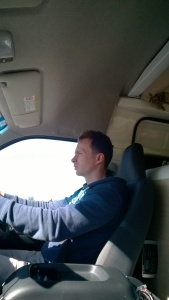 We were back on the road for 9am and heading to sub-tropical temperatures in Northland. We drove through Auckland, recognising some of the sights, from what now seems a very long time ago. With the Sky Tower in our rear view mirror we headed along No. 1 Expressway towards Whangarei. We detoured along the coastal scenic route to avoid a section of toll road and it gave us a chance to stop and take photographs of some lovely beaches, before returning to the Expressway.

First real stop was at One Tree Cove which provided good views across the bay towards Whangarei.  We reset our Satnav to Abbey Caves which were just on the other side of the town.

We parked alongside a small group of other vehicles high up on a lane in the hills looking down on the town and bay. We read the warning notice board that informed intrepid cavers that you explored them at your own risk and that they are designated as dangerous.

Following a very pretty track downwards, passing among weird rock formations that looked remarkably like Henry Moore sculptures. I am surprised some entrepreneurial farmer hasn’t used his tractor to pull them out of the ground and sell them as works of art. I would buy one (at a reasonable cost of course).

We found the first cave, aptly named Abbey Cave, hidden among a large pile of boulders. The entrance was difficult to climb into, but I with my head torch and Jamie with the light App on his phone glowing (surprisingly brighter than mine) managed to splash down into the darkness and rocks. A shallow stream was flowing quickly downwards and around 40m into the system we came across 4 German tourists in underwear sporting just one torch. We passed, exchanged greetings and carried on until we were soon stopped by deeper water. Switching off our lights we were treated to a free show of Glow Worms. Returning to the surface our European friends were more suitably attired and chatting among themselves. They ignored us as we left, I think a little embarrassed.

We again followed the path and soon came across cave number 2, suitable called Second Cave. We repeated the procedure as before, though this one proved a little easier to enter and also contained Glow Worms, though we didn’t venture as far into this one as the tunnel grew quickly smaller and crawling through on hands and knees in underwear isn’t British!

Cave number three got a cursory visit to the entrance before we decided this one was for those wearing the right gear and not for us.  We returned to the van by way of the track that looped back to the road.

We reset the Satnav for Whangarei Falls, some 4.5 km away. It was on the outskirts of the town and right next to an old folks home. A lovely place for a picnic and plenty of people were doing just that. The falls were pretty impressive with plenty of water cascading over the cliff to drop 26m into a large pool before carrying on downstream. I did a circuit of the top and bottom sections, taking photos then returned to the van. We stopped just down the road for sandwiches before driving into Whangarei centre.

Whangarei is certainly an upmarket place to live and has restaurants and shops to match, not to mention the yachts in the marina. We wandered for a while, checked out the films at the cinema but didn’t fancy any so decided to make some headway towards tomorrows destination.

We camped that night in a small town called Dargaville at a site that had little cabins made from railway wagons, how novel. We did a spot of shopping at the local supermarket to replenish our supplies. For the first meal cooked in the RV, Jamie made himself chicken, cashew and tarragon tortellini from a ready meal.

We spent the rest of the evening in the local sports bar.