We both slept well despite selecting an unpowered campsite within 30 metres of the sea on one side and a railway track 30 metres on t’other. Three trains night trains and a full ebb and flow of the tide, we woke refreshed and ready to face  another adventure.

We drove the short distance along the sea front into the centre of Napier and had a walk around this pretty art deco town. We stopped for coffees at a small cafe and used the internet to catch up on news before returning to the RV and ascending the heights of Bluff Hill and took in the view of the harbour and bay. 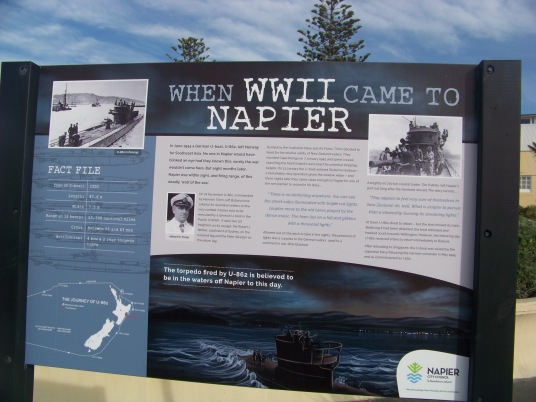 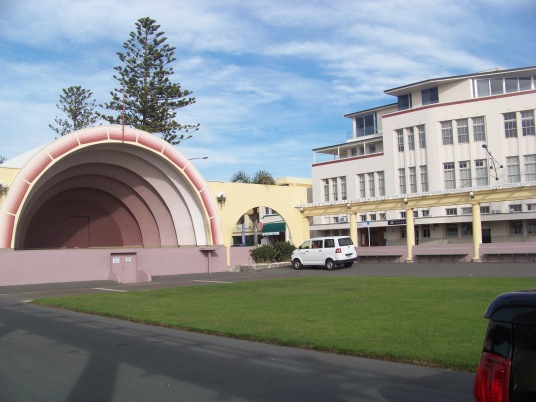 It was our intention to head off  for Mount Taranaki and complete the journey in 2 days, stopping off as and when we felt the need to experience anything that took our fancy. In the end it was the journey itself that was to be the star of the day. We did stop many times to take in the views and photograph the constantly changing landscape. Through forest, deep ravines  and a myriad of round-topped hill speckled with white sheep or black and white cows, all seemingly content to munch grass within a few metres of each other, we were eager to discover what surprises lay around the next bend or over the approaching brow of a hill and drove on. The variety and perfectness of the views along the Napier to  Hautapu road are some of the best I have ever experienced, a truly brilliant driving experience. Its only draw back being that it is very heavy on the brakes and many downhill sections will produce that acrid smell of white-hot metal.

Hautapu has the feeling of a frontier town, we had noticed that the scattered farms in the highlands were now called stations, adding to the impression that we were travelling through recently explored territory. Its buildings are rustic and quaint, with more than its fair share of second-hand shops, giving the impression that it is not a rich area. Sheep and cattle rule here. In the approximately 200km we did today, we saw two logging trucks and 3 4xWD vehicles, not a lot of traffic.

We had a lunch of Nassi Goreng at a small Malaysian cafe in the main street. There were three other diners, but not much more sign of life in the whole town with only the occasional person crossing the street. We amused ourselves by feeding a couple of sparrows with rice. We drove on.

Our target was Taranaki, but we knew that it would be dark when we arrived if we stuck to plan so we opted for a coastal site just outside of Hawera instead. It was very late in the afternoon when we got there, but still light. We had just enough time to check in, couple up to the electricity and have a walk down to the heavily eroded volcanic beach. 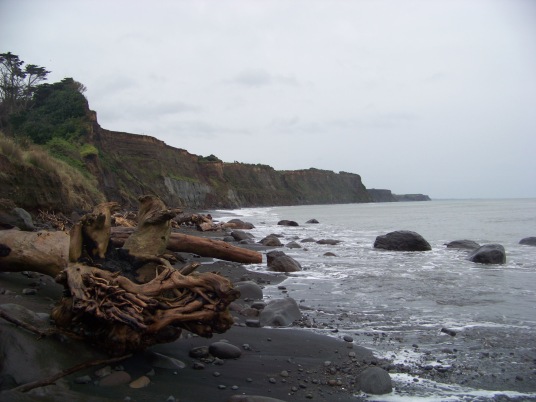 Supper was Bhuja, burger flavoured onion rings and cider. We should have bought something on our way through the small town of Hawera, but we didn’t! The lack of calories will no doubt do us good.

No WiFi here, so cards and listening to music on my mobile phone was the order of the evening.