That evening we did return to the Sky Tower and as expected the view from on high was on another dimension from earlier in the day, but no less spectacular. There was something happening at the iconic Eden Park and it was lit up  as if to invite ‘a close encounter’ of the sporting type. I found the ribbons of traffic rippling through the city quite fascinating. For a country of such a small population, they must have all decided to get in their cars and provide a light show for the tourists peering down on them. The Sky Tower at night is a must for any visit to Auckland. 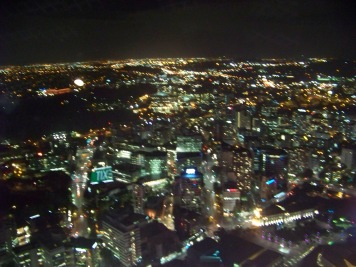 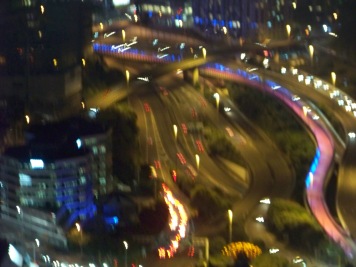 Breakfast the following morning was a slightly different fayre from the chinese cafe of yesterday, BLT sandwiches and coffee, which we ate in our hotel room.

By 9.30am we had checked out and were on our way by taxi to the Britz campervan hire showroom. Once the paperwork had been completed we were surprised that we did not have to sit through several videos of how to operate the vehicle etc. Probably because we had ticked the boxes which asked if we had driven such a vehicle before. After a quick inspection of the vehicle with a young lass from Bromsgrove we were left to begin our adventure.

The day was perfect, clear blue sky, warm (19 degrees) and as we found out during our taxi ride, the traffic was light. Though we had brought our own SatNav, the vehicle came with one and we used that. Our destination was to be Hahei on the Coromandel

After leaving the city of Auckland behind we entered the farming belt and expecting to see some of the millions of sheep that NZ is famous for, we saw only cattle (and Llamas). The landscape became progressively more and more like a scene from the ‘Shire’ and we half expected to see the odd Hobbit or perhaps even an elf pass by. The peninsular is truly a beautiful part of the world. Rolling round-topped hills abruptly giving way to more vertical but softened by nature, volcanic ranges mantled in green exotic tree life such as the tree-fern and eucalyptus. 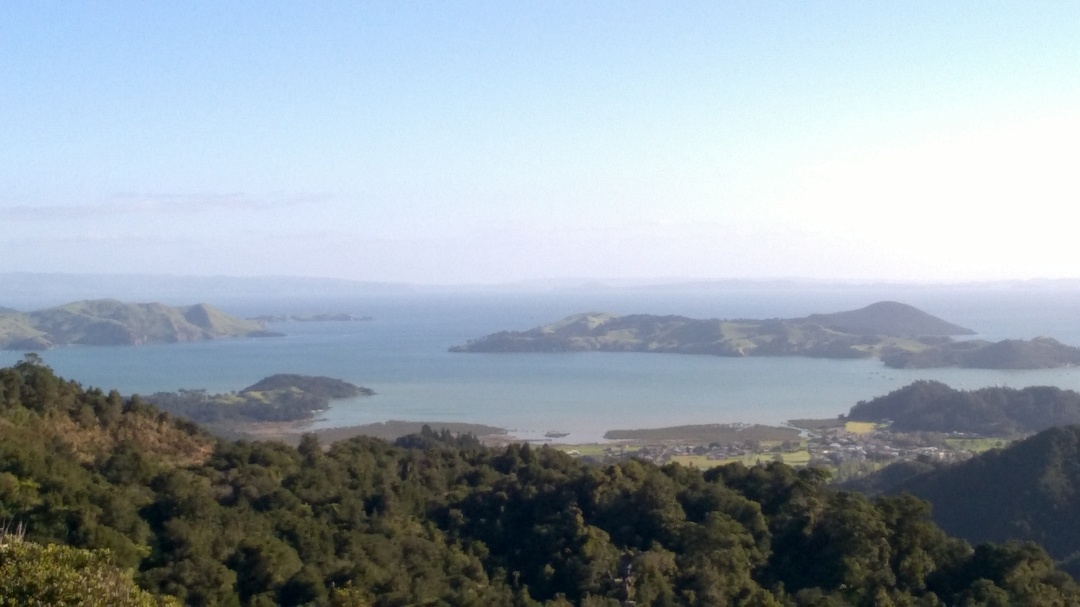 The western coastal road is a magnificent twisting snake that has been sullied by recent earthquakes and repairs are underway on many of its sections, so progress in parts was quite slow. In one of its more remote sections, we pulled over for a break and  to admire a particularly fine view when we found to our dismay that one of the rear wheels was flat. I attempted to ring the emergency number given, but couldn’t raise a response on my UK mobile. We decided to push on slowly until we came a cross human habitation and see if we could use their NZ phone.

Pretty soon we came across a small bungalow. Luckily it turned out to be owned by a farmer who had just returned for his lunch. After speaking to our emergency number, who promised to send a vehicle out, he decided that it would be quicker if he replaced the wheel with our spare, himself. As he disappeared to gather up the necessary equipment, we extracted the spare from under the camper van. Though we had a brace and wheel, we did not have a jack, so our farmer friend used his. Soon we were roadworthy again and after offering to pay our new found friend, who rejected our offer, we were about to hit the road again when we were caught in conversation with a young lady cyclist. I think she craved a bit of company as she explained that she was circumnavigating the whole of NZ for charity. She had already done the south island and the section on the north island to Coromandel was the last leg. A very brave and fit girl, parts of the peninsular were fiercely steep.

The rest of our journey passed without incident to Hahei, apart for a brief stop for coffee and soda ice-cream as refreshments.

Our aim was to see Cathedral Cove and we reached its car park late in the afternoon. We passed many fellow tourists coming up on our way down to the beach. One passing middle-aged woman told us that we would be exhausted on the way back. She was not wrong, our destination lay some 35 minutes away down and along a very narrow but well used cliff path surrounded on all sides by lush tree ferns. It was worth it, and I think we got there at the right time as the sky was getting that lovely pinkish, yellowy orange glow to it, indicating that sunset is well on its way. Many wanderings and photos later we left the sand and weirdly contorted rocks to return exhausted (as predicted) to the car park.

Setting the SatNav for the nearest campsite, we set off. Half an hour later we had checked in and were back on our way to a small fish and chip shop in Hahei for our evening meal. Snapper and chips with tartar sauce, which we ate back in the van, back at the campsite.