After breakfast we all met up in reception  in readiness for the short journey to Gupteswar Mahadev. The peaks of Annapurna, capped with wispy clouds, glowed in the early morning sun as we boarded the minibus and rattled our way along to our destination.  We arrived at the gorge and cave complex, paid the entrance fee and set about exploring. 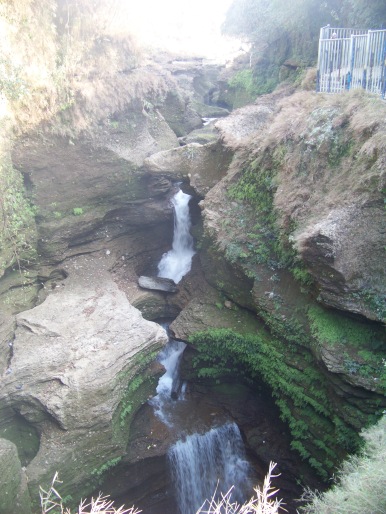 We stood awhile on the bridge over the narrow gorge, gazing down at the racing torrent way, way down below. I think ‘gorge’ is too grander term for the sight before our eyes, I think ‘crack’ would be a more accurate description as it appeared to be no wider than 2m at most. What was impressive was the depth. Further along was Davis’s Falls. As it was the dry season, it was not as impressive as it can be, but none the less the story of the Naming of the falls was interesting. A Mrs Davis went for a bath in them and not surprisingly she was swept away, hence the name. To be more accurate, they should have been called Crazy Woman Falls.

Before moving on we had a bit of silliness with photographs and statues displaying local native costumes. Even grown-ups can regress at times.

Next we delved into the bowls of the earth via a very ornate staircase that was still being sculptured by a very talented Nepalese lady using concrete and rubber gloves. The steps led to a Hindu shrine, that we were not allowed to photograph, but as it was hidden behind iron bars, there wasn’t much point in trying to do so. After circling the stalactite come griffin come icon we left the cave and moved across the road to dive again into another grotto. This one displayed a sign saying ‘Cattle Pen’ pen located around 100m into the system. It smelled like one too, but on squeezing down through the narrowing tunnel we came across a concrete cow. Apparently it too is a holy icon, not to be photographed, but for 100 rupees we could touch its nose. There was a lady sentry there to ensure that things were kept in order. No rupees were handed over and we passed on. If the cow was concrete where did that awful smell of cattle come from? The lady? 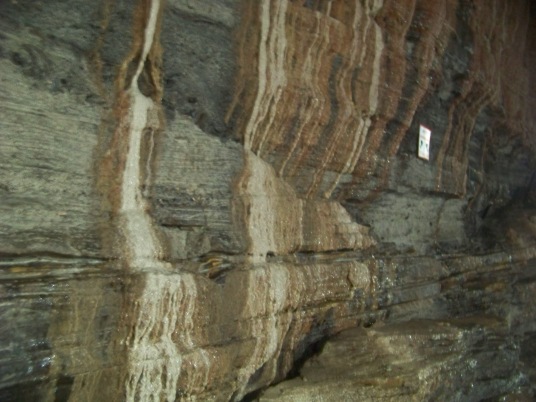 Winding our wet way ever deeper into the system we eventually reached the end of the navigable route set aside for tourists. Confusingly we had descended for around 20 minutes, yet in the distance  we could clearly see an underground stream bursting out into daylight through a narrow crack in the cave wall. How did that happen? Was the magic cow responsible for this? I might have to re-think Hinduism!

We returned to the surface back along the tunnel, magically not coming across the concrete cow and sentry. It is all beyond me. Nepal is truly a mystical country.

We moved on to a refugee camp and carpet weaving establishment. The refugees had fled from the north away from the Chinese who were intent on a bit of genocide. They were homed in Pokhara and made their living by making carpets and acting as trekking Sherpas. We looked at the various displays informing tourists of their plight. Sue bought a carpet with a woven picture of Everest in it. 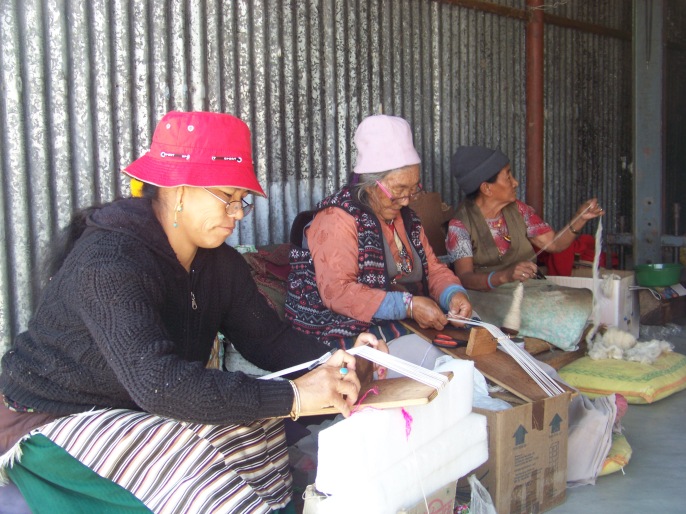 Next stop was the Gurkha Museum. As you would expect of a military museum it was full of uniforms, medals, photos of soldiers and information on regiments. This was no exception. The difference was that these soldiers gave up their lives in the tens of thousands over the last two hundred years to defend another nation. Reading accounts of their bravery in action was inspiring. Watching a short video of a soldier returning home to his mountain village with parents plus extended family exuding pride in bucket loads was quite humbling, especially as this tough no-nonsense warrior is seen wiping more than a tear from his eyes. They stand by us, as a nation we should stand by them.

A very late lunch was taken short a short step away from the museum. As we were not in the mood to hurry, this became a very extended lunch. A lot of team bonding took place with Ghorka as a lubricant.

Next we travelled to the Mountain Museum. Very interesting. Lots of photos and stories of climbers and lots of the paraphernalia of serious mountain climbing, including a large display of the rubbish collected from Mt. Everest. We were joined by a large part of Nepalese school children. Very young, very sweet and remarkably well-behaved. Not a lot of education went on as they were marched past each display in military fashion, with no more than a few seconds to glance at the exhibits. Hmm, what can you say, no doubt in the not too distant future Nepal will be usurping Britain in the international league tables! 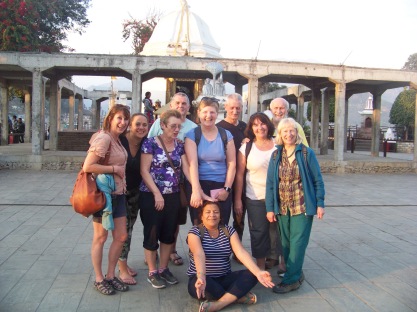 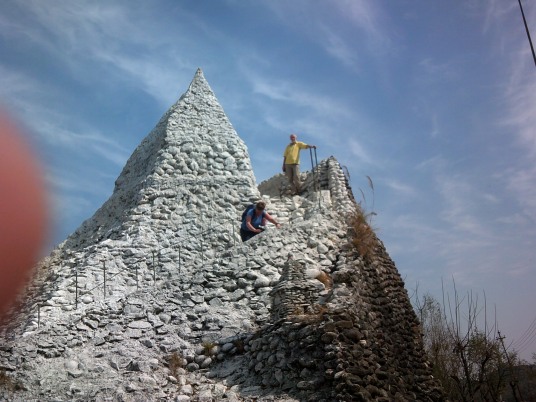 For the final activity of the day we visited the Barahi temple, located high on a hill above the town. The views of the Annapurna range were superb, so a lot more photos got taken, many to be destined for the ‘bin’ on return to the UK. This temple is where the wealthy of the city get married and we were lucky, one was already in progress when we arrived. The temple is incredibly small, only the bride, groom and mother of the bride (I think) fitted inside, with presumably the religious leader to conduct the ceremony. The rest of the family had to stand outside looking bored. As the couple left the temple to pose for photographs they looked so young and the bride appeared absolutely terriffied.I watched the first few photos, but I guess they were destined for the bin too, unless Photoshop has copy and paste on smiles.

Sometime during today we were due to spend an hour on the lake, but it was not to be. Too much dawdling, food, coffee and beer stops just gobbled up the time. It is now scheduled for another day.

Returning to the hotel, Sue and I spent a little time in our room resting, before walking into town, exchanging some cash for rupees and finding a restaurant to have our evening meal. The town was very busy with many tourists engaged either in promenading, shopping for trekking gear, or like us, choosing a place to eat.

Hunger satisfied, we returned to beds.