Where did autumn go? Where are the frosts, the wind, the falling leaves?

True, I have collected enough to fill one bin and yes, some of the trees in the garden are changing colour, but most are still green and dandy. Daytime temperatures seem to be fixed around 15 degrees and at night I have yet to see it below 9 degrees. Will I ever get any use out of my thermals?

Since returning from Jersey I have stopped the fermentation of my wine at 1.10 sg and racked it into fresh demi-johns. It is going to be a meagre harvest this year but it tastes and looks like it may produce a decent wine. Only time will tell.

Early on the 25th Oct. Sue and I travelled down the A14 to the Dragonfly Hotel in Bury St. Edmunds. Sue has never been to this ancient town and though I have on many occasions, it was only to run around on the green turf of its rugby club then return home. We were to spend three days here immersing ourselves in the history of the place.

Our luck with ‘checking in’ held and reception gave us the key to our room straight away. After a coffee we set off to walk the 15 minutes into town along a pathway that crossed over the lovely River Lark, a tributary to the Great Ouse.

We had done some research on the place and I had printed off what turned out to be an excellent historical town walk which took us by all the main features, providing a full description of its importance. First stop was the Abbey of St. Edmunds. A truly gorgeous place to spend a few hours and many of the local inhabitants were doing just that in the warm midday sun. Finding a bench with a view, we sat and ate our packed lunch watching other picnickers give up some of their fayre to a horde of very tame squirrels and pigeons. As obvious ‘out of towners’ we were left alone by the urban wildlife and ate our sandwiches without molestation.

Our route took us out of the Abbey and to the grounds of St Mary’s church where Mary Tudor, Queen of France was buried. Many of the walls and houses we passed were built using the stones from the abbey after its dissolution.  The Charnel House was particularly interesting as it held the bones and relics of past citizens. The plaques and gravestones hinted at many fascinating stories. One of an 8-year-old girl killed by lightning in the 15C, the engraved words and poetry really touched the heart. You could sense  the anguish of the parents as they declared her soul to be pure and  God-fearing, forever at her prayers. I think they feared she had been punished from on high for something we will never know.

A more verifiable tale is that of Martha’s Vineyard, it was named after Bartholomew Gosnold’s mother-in-law or his daughter, both of whom were named Martha. He had taken his family to settle in America.  His daughter was christened in St. James’ Church and is buried in the Great Churchyard which lies in front of the abbey between St. Mary’s Church and the Cathedral.

We came across Theatre Royal, at which we had booked to see a performance of the ‘ A Princess Undone’ starring Stephanie Beecham and across the road was the Green King Brewery Visitor Centre. Here we booked a tour of the brewery for the following morning.

The next part of our walk took us into the town proper and we  made our way along narrow alleys and cobbled streets, stopping regularly to read our little booklet and the many wall plaques that we had been steered to. On reaching the town centre itself we stopped a while in the reputed, smallest pub in the UK, the Nutshell. We had refreshments and chatted to some regulars who were keen to know all about us. A very friendly pub, all the more so, due the closeness of your fellow drinkers. Well worth a visit if you are in the locality, if not for the beer then just to see the cobwebbed and mummified cat hanging from the bar. Macabre!

Passing through the Town Square we reached Moyse’s Hall, now a museum before making our way back to the start via the Butter Market and The Angle Hotel where Dickens wrote the ‘Pickwick Paper’ in room 15. I bet that is a popular room to stay in. Outside the hotel is the country’s first illuminated road sign, in the shape of a lighthouse, very novel. It is local known as the ‘Pillar of Salt’.

We ate that night in the hotel before driving to one of the three town cinemas to see, ‘Woman on a Train’. A reasonable film, it could have been done better.

After breakfast we again walked into town and joined ten others, eager to learn all about the brewing process and perhaps sample some of the product of the Green King Brewery. The tour started at 11am and it was well past 1pm by the time Sue and I left the premises. Our female guide was extremely knowledgeable and had a lovely sense of humour, borne of her Scottish roots.  We worked our way through the processes involved, level by level, until we reached the roof, where the water from the underground aquifers is stored. We had magnificent views over the town from here.  Returning to ground level we then sampled the various brews (and there are a lot). We discovered that two our party had been voted Publicans of the year for 2016. They owned a pub in Edinburgh and had come south or a holiday. I am sorry to say that Sue sampled more beers than I, she hasn’t yet got the knack of slowly savouring the flavours to appreciate the skill that goes into each brew that makes it unique. It will come in time and a few more tours.

We next did a spot of shopping, I found a rather novel wind vane that had an owl reading a book wearing a mortar board in the Market Square. I bought it. We returned to the hotel via the Brewery to purchase a hessian bag containing 8 different beers, before having a  light lunch.

Around 5.30pm we again walked into town and had our evening meal at the Dog and Partridge, just a short step from the theatre. What a delightful auditorium the theatre has, restored and decorated in its original state.

‘A Princess Undone’ is a fanciful play based on Princess Margaret and the burning of private letters. Sue is a Royalist and knows practically everything there is to know about the Royal Family (as did most of the audience) and picked up on all the nuances in the script, most went over my head and for once Sue had to whisper to me what was going on. I saw or heard little that deflects me from the opinion that all Royals are a personal burden on my taxes and should be sent out to do a proper job and pay their own way.

Though we didn’t have to check out until 2pm the following day, we did so raround 10am  after breakfast as we were keen to visit West Stow Anglo Saxon Village.

It was only a short drive to West Stow and after paying our Concessionary entrance fee we wandered around the various outdoor structures after first working our way through the two indoor museums in site. The place has been designed to give you an insight into life during the period and it certainly does that. Lots of exhibits, logically laid out and easy to browse through. A really great place to take a school party. 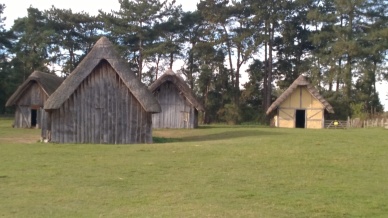 After having hot chocolate in the café we set off on the Beowulf Trail, which tells you the story of Beowulf and Grendel and unfolds through sculpture and information board as you amble through the beautiful Thetford Forest. A lovely way to spend an afternoon.

We returned home, stopping for coffee with Charlotte in Rothwell on the way.

The following day we had Charlotte and the boys over for ‘Minty’ burgers. Jamie was ‘best man’ at an old school friend’s wedding in Daventry (Michael Hobbs) and couldn’t join us. His speech went well and I think he was pleased that he had learnt it off heart and didn’t have to refer to any bits of paper. I had previously read his speech and I guessed it would be received well as it had the appropriate amount of humour laced through it.

Prior to Jersey I had emailed Joan and Phil who live in Marche, Italy. There had been an earthquake in that region and many people had been killed. Thankfully they were fine and suffered only shakes and rattles. Yesterday, Marche had another, more sever earthquake. I sent another email but so far have heard nothing in return. Fingers crossed all is fine.

Sarah had a recent drive in a rather nice car during a works function. I include the photo because of the car.