We weren’t bothered by bears during the night, but Jamie’s mobile phone went off at 2.20am shortly followed by the wailing of the Trans Canadian ghost train. The RV  then decided to join in with the fun of keeping me awake and set off its carbon monoxide sensor. After checking that the gas was off (the valve is outside of course), and then resetting the alarm, another wailing ghost train rattled by somewhere in the wilderness. I would have settled for bears, they can’t possibly make such noise.

It was nearly 9am before I rose and not happy to learn that Jamie had slept through it all.

After breakfast of coffee and cereal (again), we drove into the village as Jamie wanted a roll for his breakfast. While he was purchasing it I used the WiFi from the cafe to send some pics and check the news.

Soon we were pounding the Trans Canadian Highway towards the Columbia Icefield. Our journey has so far taken us through some wonderful photogenic scenery, but todays route upped the awe factor by another level. Scene after scene slipped by, briefly frozen in memory from recollections of films, nature programmes and magazines. Alan Ladd and  John Wayne among many others rode through here bravely fighting injuns or protecting their claims from varmints. 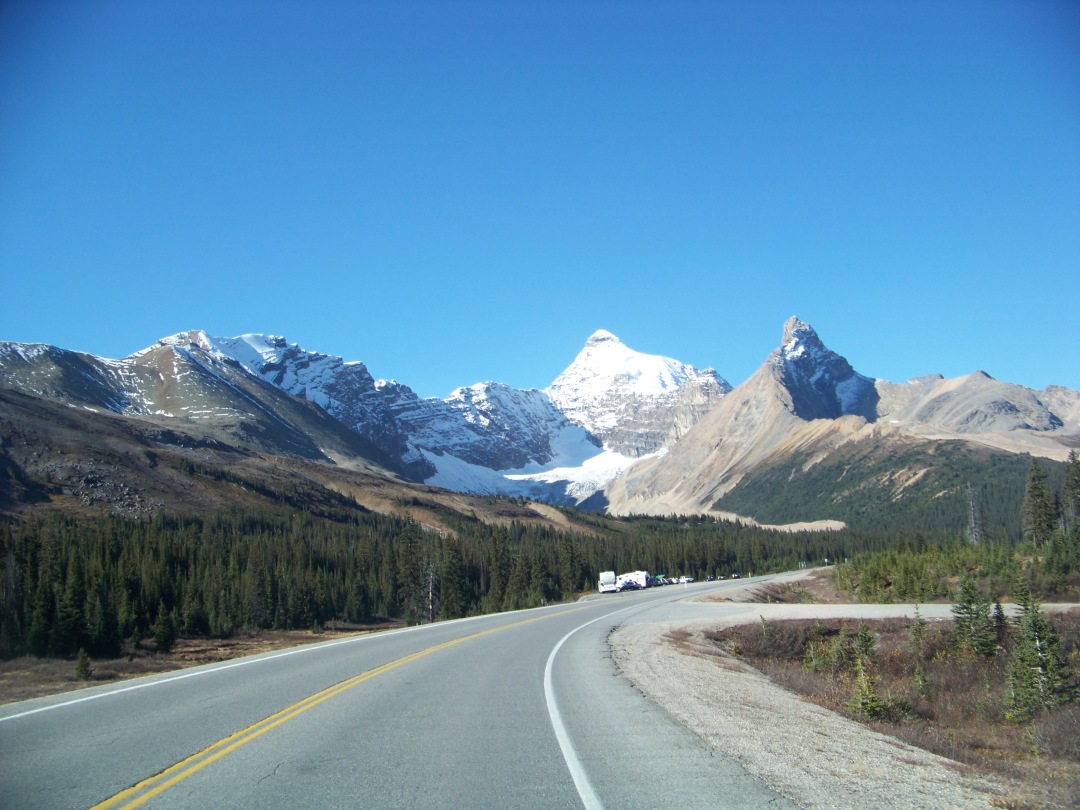 In just under two hours we arrived at the Ice Field Centre which is opposite the Athabasca Glacier. After checking out the information boards and small museum we purchased tickets for the Glacier Skywalk. Canadian customer relations is second to none, however when you just want to buy two tickets and get on the bus to the activity the obligatory cheery welcome followed by the getting to know you patter and then the imparting some personal information of themselves to make you feel at home and of course if you have a foreign accent it is always followed by I have been/want to/ know some one who has been there is very wearisome and creates extraordinary length queues. And I was in this one!!! 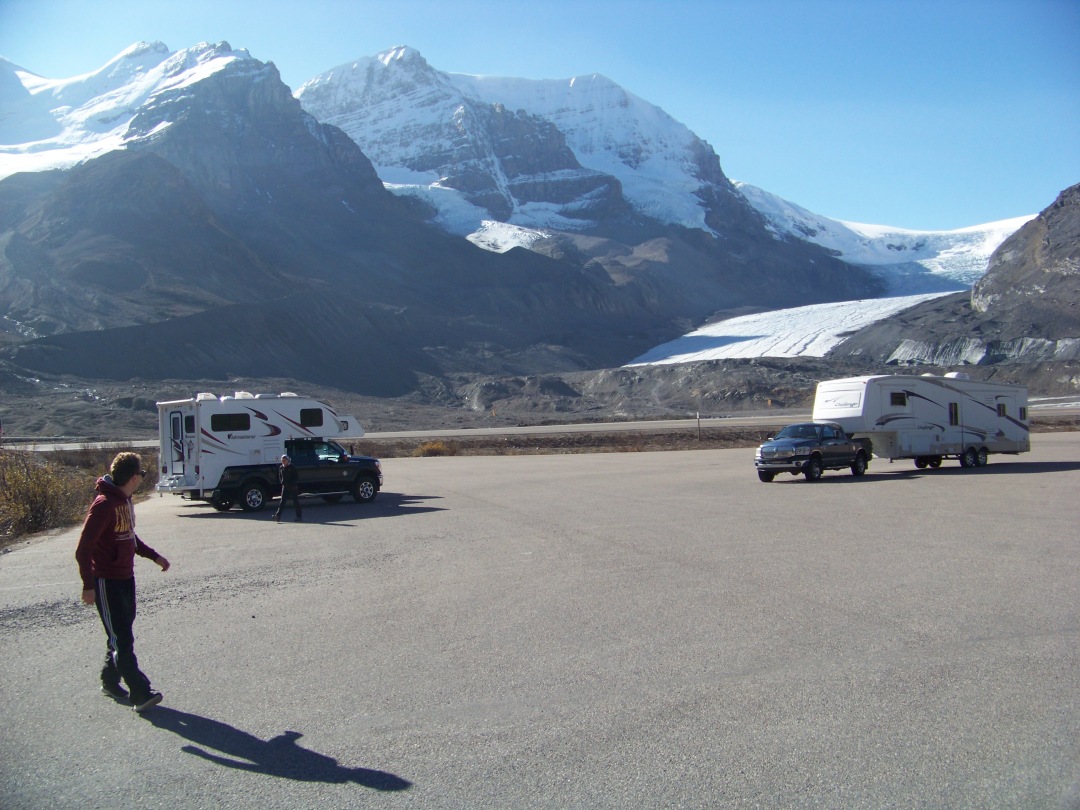 Luckily after resisting the temptation to commit Hari-kari among the thronging Japanese milling all around me it was a bonus to find that the bus was there waiting to whisk us away and we didn’t have to queue.

The Sky Walk is not as you would expect over the glacier though I am sure that at one time (blame global warming for that) it does jut over the fearsome chasm that the glacier gauged out  probably not so long ago. Of course the floor is glass and after being reassured by the guide that it could take up to 8 tons of weight, it would not break if stood on. I opted to stay away from a couple of Americans in our group  as I did not want to test his theory. After many photos we returned to the  bus and returned to the centre.

The cafe did a good chicken burger and fries with the minimum of chatter and the maximum of service, the ticket booth staff upstairs could well learn from these people.

We drove the RV to the car park at the base of the glacier and trekked up the slope to the very edge of the ice field. There was a warning poster there which declared: Do not walk on the ice, there are dangerous crevices here, the ice field rescue staff are extremely efficient and well-trained, hyperthermia acts faster than a rescue team can assemble, the last three people to fall in crevices did not survive. Yep, I got the message. Don’t cross the tape. 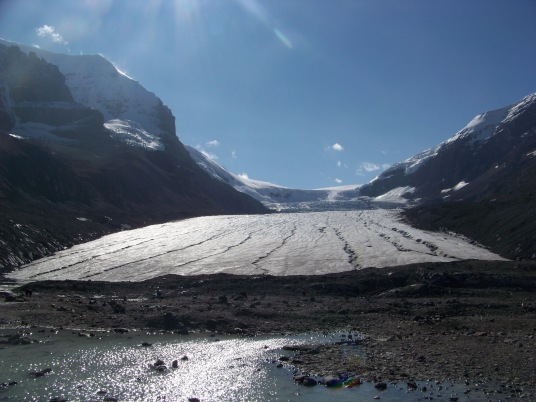 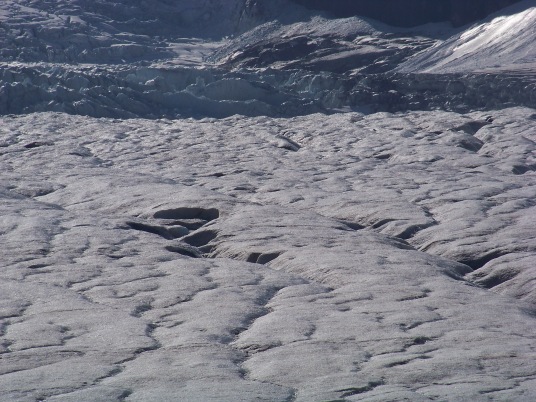 We followed the circular route which took us along the front edge of the glacier and back to the car park.
In the year that I was born (1953) the glacier extended all the way to the Field Centre, which must be some half mile away now, between the two points are many little signs indicating the year and showing the  extent of the ice field at that time. 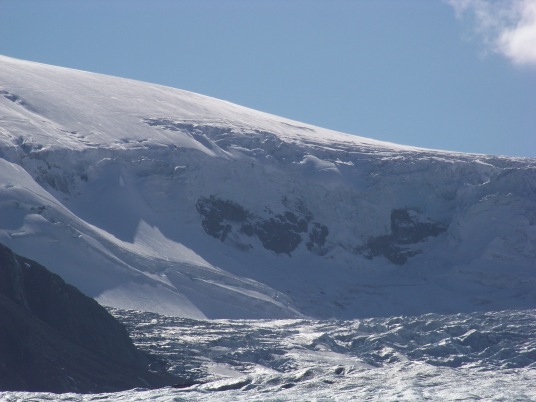 With the glacier now ‘done’ we headed back towards Lake Louise. We stopped several times to take photos of even more picture postcard lakes with a back drop of forest and mountain. After yesterday we are getting better at finding the right spot and angle to take our photos. We had an interesting amble around a closed Silver Horn campsite. A very pretty spot with tables and fire pits dotted around still little ponds that reflected its surroundings, just asking for you to press that shutter once more.

Arriving at Bow Lake we walked to the shore and looked at the Bow Glacier at the far end. We thought about trekking to it, but as it was late in the day it would certainly be dark on our return. We didn’t have lights and of course there are bears, not forgetting wolves, and of course the $25 000 dollar fine for feeding them. We decided to return tomorrow and attempt to reach it without being eaten.

We checked into the same campsite as the previous night, requesting a pitch nearer the showers. We were given one across the road. I hoped it wouldn’t be too noisy.

We had our evening meal out of the microwave listening to the radio which was  again discussing Clinton and Trump. We opted to leave Canadian radio mulling over the American elections and drove into town and hoping to play pool in the local bar, but the table was out of commission as it was pushed against the wall making room for more meal tables. We sat and watched a baseball game on the TV and  had a drink. As we were leaving they cleared the tables away and put the pool table in position, but three guys grabbed the table before we could. We drove back to our pitch to find someone in it. We encouraged him to leave, which he did.

We listened to a bit of radio before settling down for the night to dream of bears and wolves.