Despite May erring on the inclement, the family managed to take the variable weather in their stride and get on with life in the usual manner.

While Sue and I kept our feet firmly in Leicestershire, Sarah and Lee took over the international roaming duties and jetted off to Disneyland Paris for a few days at the end of the month. Despite recent terrorist activities in the city they avoided any major incidents, including the apparent shutdown of the country through strike action and empty petrol stations. We looked after Mia while they were away and she had a great time accompanying me on a grand tour of the hostelries of Leicestershire. 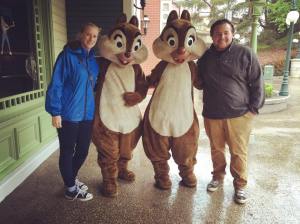 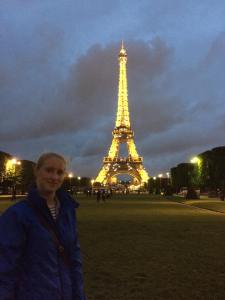 The cold and wet didn’t prevent Sue from tramping the countryside with her U3A walking groups, though on one occasion they did reschedule one walk and of course a frustrated Sue spent an afternoon pointing out to me that it was hardly raining and asking, “Don’t people have rain gear?” Of course I agreed.

I managed one walk in Rutland with John who had just returned from a two weeks fishing trip to Cuba. Though as usual we managed to put the world to rights, we could do nothing about the May weather other than insist that the sun made an appearance for that day, which it did.

We still visit the ‘Silver Screen’ cinema showings on a regular basis, ‘Dad’s Army’ was particular good, and have  occasionally called in to see Roger on our return journey to Harborough. His parents are causing him great concern and he has spent quite a bit of reluctant time down in Bristol helping his sister sort out their various medical problems. He called around one day and I agreed to spend a day with him to upgrade his laptop to Windows 10 and set up his system to run BTSport from the App. I had offered to do this for him a year ago, but I mentioned the fee would be lunch at the The Swan and I guess it has taken him this long to save up! He can now watch the rugby without it buffering incessantly, crashing frequently  and the action apparently staggering and leaping about the pitch.

We have a very good Comedy Club in Harborough and a couple of times this month we have been entertained there. On the last occasion we met Paul, Louise and Sean there. We were surprised that they had never been before.

On the 12th Sue, Charlotte, Jamie and Sarah went to see a performance of Grease at the Cube in Corby and thoroughly enjoyed themselves. Jamie was so impressed that he accompanied Sue to see Johnny Cash at the same venue on June 10th. 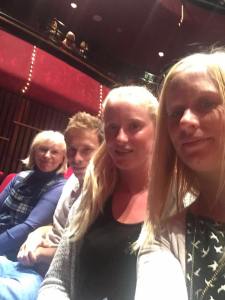 At the end of May I used the bike to visit Arthingworth Beer Festival with Peter and Jim, luckily we had fine weather and for the first time that week we were able to sit outside and enjoy the selections on offer.

As usual, Friday family curry nights have been in operation, though Sarah and Lee have not always managed to attend due to work commitments. We did manage one BBQ during the month, though it could have been a warmer evening! There were two culinary highlights during the month; I discovered the art of making spicy turkey meatballs and Fijian chicken with Bami Goreng.

Way back in February I entered a competition whilst at Heathrow Airport and recently found out that I had won. It was a Saturday out at Twickenham to see the HSBC World Sevens with Lucas. We were to be England team mascots and walk out onto the pitch with the team. Unfortunately, much to Lucas’s dismay the organisation by Heathrow management was dire. The tickets were promised by the previous Monday and final instructions, by email on the Wednesday. After many emails from me the instructions arrived on the Friday, as did the tickets. Unfortunately, I was out shopping for Curry Night and a card was popped through the letter box indicating that they could be picked up the next working day as a signature was needed. Train tickets at the beginning of the week were £42, by Friday this had risen to £137!!! We didn’t go.

On the last day of May, Charlotte and the boys came over and with Sue we drove up to Sarah’s before continuing on to Thornton Reservoir for a lovely walk and lunch at the Bricklayers Arms. A very picturesque part of the county and one we must visit again.

While we were enjoying ourselves in the North of Leicestershire Jamie had Travelled to the east coast with friends for a very chilly camping weekend, brrrrrrr!

On the gardening front, because of the cold and wet spring continuing into the start of summer the plants have been slow to germinate and grow, things didn’t pick up until we had a few hot days at the beginning of June. However, since that early promise we have returned to cool and damp conditions, good for potatoes, but little else. The greenhouse tomatoes are only just getting their first trusses and the vines have not long emerged from bud. Even the elderberry hasn’t come into blossom yet and in past years we have been drinking cordial made from its blossom by now.

June didn’t start well on several counts. We had news from Philippa that she was unwell and is due to have an operation soon.

An ex-rugby chum who I only saw and chatted to a few weeks ago at a re-union dinner,  passed away in his sleep. I had known Ian from the 70’s when we had played for the same club, Wrexham. We met again when I joined Kibworth RUFC. He was a lovely person, fully of energy and so enthusiastic and unassuming. We had often travelled together to away matches in his Range Rover and played together in representative sides around the Midlands before I discovered that he was a millionaire. He had bought ‘Neighbours’ and later ‘Home and Away’ bringing them to the UK and adding to his already considerable family fortune. In the past as a family we had attended a BBQ at his home in Wadenhoe and I got to know his wife Tina and son well. I hadn’t seen him for the last 12 years as he spent his time between his home in New Zealand where he played polo and at Wadenhoe where he played polo for Rugby. I attended his funeral with other rugby friends. At 60years, he was too young to go.

On the night that Jamie and Sue went see Johnny Cash tribute band in Corby,  I attended another, more pleasant rugby occasion. It was Ian Joules (father of Tom Joules – retailer) 80th birthday party. Though Ian was too old for us both to have ever been on the same pitch as each other (I am sticking to that story), I did play with his son Tom and he was always on the touchline when I was playing for the 1st team. I attended with Sean and we had a very pleasant evening. A comedy band called ‘Fingers an Fumbs’ provided the entertainment and the jacket potatoes with chilli went down well.

The other day I donned my dinner jacket and served at table for a charity event at Marston Trussell Hall. I have done this for the last 4 years along with Sean and Jim. This year David Tomlinson joined us, which made it a little less frenetic. It was a very hot day and afterwards I spent the rest of the afternoon in the pool, cooling off. 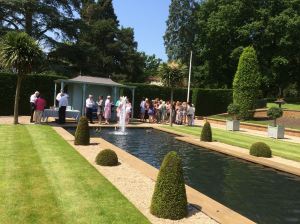 At the weekend Sue drove over to Tenbury Wells to help an old family friend Sheila, celebrate her 80th birthday. Philippa was due to attend also but a chest infection prevented her. Things went well and though the weather wasn’t great, Sue managed to avoid the storms on her journeys there and back. I depressingly watched England draw with Russia along with some friends on the screen in the lounge. What a waste of good beer! 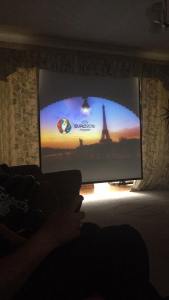 Jamie and I are planning another road trip. We are off to Calgary in September and hope to travel into the Rockies around Banff The flights, mobile home and hotel are booked, we now have to plan our route.

Sarah and Lee have booked the venue for their wedding reception.

Jamie bought Sarah’s KA to drive to work in. He still uses his EVO for the weekends and car shows.

Charlotte is overwhelmed with garden work. She has started to turn clients away as there aren’t enough hours in the day.

Sue, Charlotte, Sarah and I are off to visit Nan’s bench and castle this week as it is her birthday on the 16th. We are staying overnight in a hotel.