The days are certainly becoming more autumnal now, the dark encroaches ever earlier and preceded by a distinct nip in the air. The red grapes are safely harvested (bar a few late  ripeners) and their juice bubbling away satisfactorily in the largest tub I have. I worry about a possible frost which may defeat my plans for the later ripening white grapes. Fingers crossed the sugar levels will increase before they arrive.

The sweet corn is equally slow to ripe this year, though I have picked around 20 or so that have ‘mostly’ sweetened into a nice golden maturity, a bit like Sue and I! The leeks have also had their first picking and it is much-needed as it looks as if I have made the same mistake as last year and planted far too many. I hate throwing the little seedlings away, thus leading to a diet consisting mainly of leeks towards the latter end of the winter. Oh well, they must be good for us as we are still here.

The fennel is  now finished and my Thai Green Curry will be the less tastier for its passing, the beetroot has been available for over two months now, and in order to stay on top of them  I have started to give them away, though with Nan passing I don’t have an outlet at the Old Wrinklies Sanatorium any-more. Kohl Rabi, turnip  and parsnips are fattening out and will be available for the kitchen over the next few weeks.

The other day we had Mia to stay and on my afternoon walk I came across an amazing hedgerow of blackberries. Luckily Mia had only filled one of the two poop-bags I had in my possession so the spare one got filled with the most sumptuous of berries and Mia had to hang on until we returned to base. This spurred Sue and I into gathering mode. First, I diverted on the following mornings cycle ride to Gumley Woods to check out  the state of the sweet chestnuts. This led to a series of disappointed SMS between the family as I had to report that it would be a week or so yet before the clan could gather to prickle their fingers and fill Tesco bags with bounty. The cob-nuts were not such a disappointment as Sue and I made two forays to the hedge at the back of my allotment.  There are now 5 large containers of little brown nuts drying on various windowsills around the house.

I drove over to Rothwell to dig up a rather large succulent that had grown too big for Charlotte’s gardens. I expected that the task was going to quite hard work but after drastically trimming it and with Suraj and Charlotte helping to lever the plant from its very dry and clay bed it proved not so. In around an hour I was back to Harborough digging a hole in the lawn next to the drive and it now reside there. Hopefully it will survive the winter and flourish.

Despite the disappointment of the Welsh game I have continued to watch the rugby on Saturdays, on the big screen in the lounge with my fellow disheartened ex-rugby playing friends, cheered by good ale and fast food.

On the 13th Sue and I travelled to the Blue Boar Inn near Temple Grafton, just 10 minutes drive from Stratford-upon-Avon. We arrived at this popular and picturesque hostelry around 11am, put on our walking boots and trotted along a circular route through the surrounding countryside, mostly following the Grafton Way. We stopped for a picnic lunch on a bench near the pretty village of  Ardens Graften, which incidentally is near a hamlet called Little Britain. I did drive through this a few days later and emerged unscathed. Returning to the Inn we checked in and after inspecting the small but pleasant room we had a meal in the bar, chatted to some locals who were interested in where we came from and then drove into Stratford. We had tickets for the Arts Theatre and the opening night of a musical called ‘Our House’, based on the music of Madness. We could have seen ‘Hecuba’ or ‘Henry V’ at the RSC, surprisingly there were tickets to be had, but we both agreed that something a little ‘lighter’ was for us. It was performed in the round and being on the front row we were only a metre away from the actors. A very enjoyable evening and despite in my younger days hating the songs, they have proved to be very annoying ‘ear-worms’ in our dotage. The story-line was centred around the right and wrong life decisions made by the leading character, cleverly linking the outcomes to the board-game Monopoly.

After breakfast the following morning, we drove into Stratford to ‘do the Bard’. Along with other tourists we had an official guided tour of the town visiting all the locations associated with William Shakespeare . Owen, our guide, was very good, proving to be very knowledgeable and humorous. The tour lasted over two hours, after which we visited the Pen and Parchment for hot chocolate. From there we made our way to the riverbank and caught one the little boats that plough up and down the Avon. We were its only passengers in what was turning into a chilly afternoon. The trip lasted 40 minutes and gave good views of the rather splendid Stratford river-side properties that we guessed regularly ended up under water during winter floods. 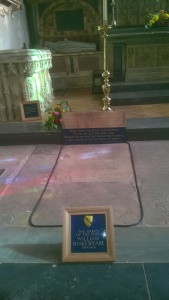 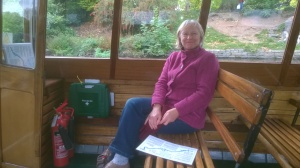 We stopped awhile at the oldest pub in Stratford, ‘The Garrick’ for hot mulled wine to warm the bones. 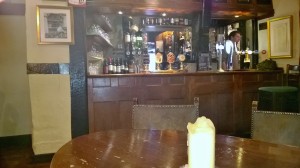 The rest of the afternoon was spent wandering the town, finishing up with a visit to Shakespeare’s birth place. Late on a chilly afternoon proved to be a good time to visit as the majority of Japanese and American tourists had long since disappeared. We had plenty of time to read the information boards and enjoy the exhibits.

After our evening meal back ta the Blue Boar we returned to the town to watch ‘Suffragette at its only cinema.’ Its other screen was showing ‘The Martian’ and was undoubtedly popular, but our rather smaller audience were obviously much more sophisticated as they came in carrying glasses of wine form the bar next door. So thespian. ‘Come, come, good wine is a good familiar creature if it be well used; exclaim no more against it.’

We returned to the town the following morning after breakfast and having checked out. We thought we were the first visitors to Anne Hathaway’s Cottage, judging by the absence of cars in the car-park, yet on entry we discovered a bus load of 60 Americans had beaten us. We opted to dally in the orchards and gardens while the Yankee Doodle Dandies vacated the Cottage. With the building quiet and free of large frames we had the place and Tudor actors to ourselves. A lovely place, well worth a visit.

We drove into the town and next visited Harvard House. Though not strictly related to William it is a good example of an original Tudor House and also worth a visit. Next on the list was Hall’s Croft, the home of William’s daughter Susanna  and her husband Doctor John Hall. Another fascinating original house.

Next we drove out of the town to Mary Arden’s Farm, the home of William’s mother. We should have planned the whole day here. There are so many different Tudor demonstrations going on throughout the day. We watched the blacksmith make nails, then moved on to watch the ‘Palmer’ household (I kid you not), have lunch in the farmhouse. We then chatted to the shepherd and his very tame ram before exploring the fields and orchards and solving the hay-bale maze. Lastly we watched and participated in a superb falconry display. Regretting that we had to start our journey home, we made for the car-park.

I had thought about stopping at Draycot Reservoir on the return route but as we neared our destination it started to rain, so we carried on home, arriving just in time for fish and chips in the evening.