We had a lie in! The alarm on my mobile actually went off for the first time since being away without me waking up before-hand and turning it off. Another first was Sue beating me to the bathroom! Breakfasted at 7.54pm and spotted Ron and Jenny having theirs. Last night they had booked the same trip as ourselves today.
After, returning to the room to pack for a hot, sweaty day: water, towel, hat, suncream, spare T-shirt and sunglasses, we met Ron Na Jenny already waiting in the Reception. We were soon greeted by the same guide as yesterday as in the same mini-van picking up six more fellow tourists at other nearby hotels.
The journey to the Mekong Delta took around two hours with a brief stop at a Buddhists Temple for photographs and a look around. The grounds and building were very pretty and in excellent condition, but it has been quite a few years since Sue and I got excited about Temples and Pagodas, unless they happen to be the biggest or have some other attraction. This one wasn’t.
After leaving the bus we boarded a small boat to cross the river to the opposite bank to visit a village and be entertained by watching how the locals made absolutely everything from the coconut palm. We witnessed how they made coconut candy, sampled the product and Sue bought some. We were walking through nice shady fruit orchards and later sampled all the fruit that was abundant in the area. The only one we have never tried, but have often seen, is the Jack fruit. Strange texture, but not unpleasant taste. 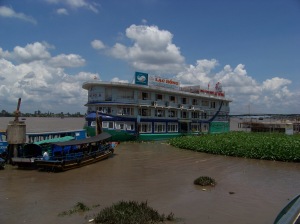 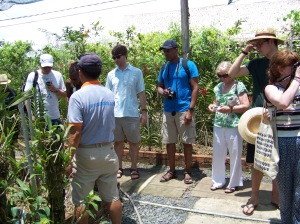 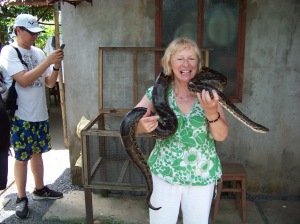 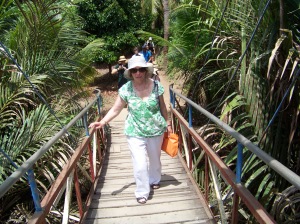 We were next treated to a horse-cart ride through the village. I felt very sorry for our little horse pulling five people and the cart. All the drivers were heavily clothed local women and ours seemed to enjoy tugging on the reins to encourage the horse to keep up a trot. I noticed the other horses weren’t treated similarly. I apologise to the little horse when we arrived at our destination and frowned at its driver. We were then treated to honey tea and shown some bees followed by a local band of musicians playing Mekong Folk songs accompanied by three wailing banshees. Not my cup of tea. 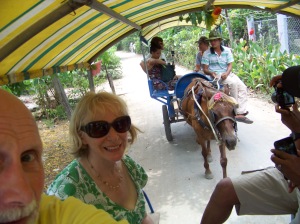 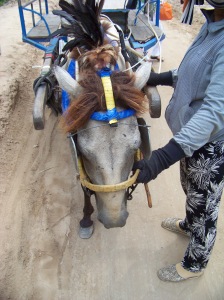 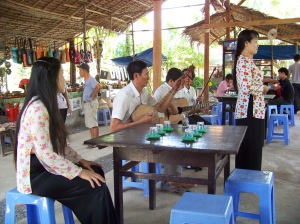 We boarded a different boat and sailed to a small inhabited island in the centre of the river. There we had lunch, with the main dish being Elephant Eared fish. We shared the table with a couple of business men from Madras and chatted through the many courses about family and India. 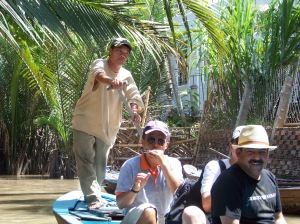 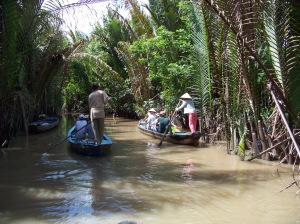 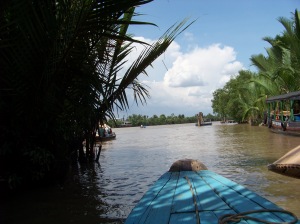 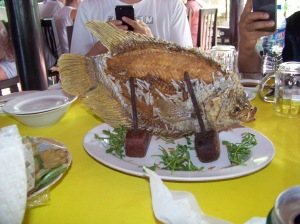 After a little walk along a path and through some pretty gardens, a scamper across a rickety bamboo bridge (not sure why) and a look at some fairly large crocodiles (seen much bigger) we boarded small sampans rowed by some local women. It’s the women that seem to do all the work around here. This was my favourite part of the day. We were rowed along what I guess was a small canal that was so pretty and cool. The foliage bent over us to give shade from the rather fierce sun and we saw the very unusual water coconut (never heard of it before) and some local geese who I held a conversation with. All too soon we had to get out of our little craft and board the first boat of the day and return across the river to our bus. 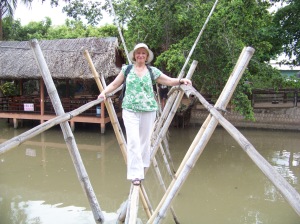 The two-hour return journey was only notable for a brief storm, halfway back to Saigon (Ho Chi Minh City). Sue slept most of the way. We spent the next couple of hours  back in our room, drinking coffee and relaxing. Sue fell asleep and woke with a headache so we watched TV in the room until bedtime. It has been a rather long day.