Another early start. Breakfasted and in the taxi to ‘My Son’ (pronounced meeson), by 8 am.
After just over an hour of travelling, we were in the mountains and parked in this World Heritage Site. It was another very hot day, temperature 37 degrees! Leaving our driver in the car park we walked along the track leading to the site for around half a kilometre, to discover that in a large communal hut there was a band and folk dance group about to start, so we sat and watched for a while.  Conscious of the increasing temperature, we vacated our seats after 15 minutes to begin our search of the ancient temples. There is supposed to be 70 ancient Hindu Temples.
Fortunately, much of the Temple complex is within the forest so we could walk in shade from building to building. The site is very old but recent events (relatively speaking) have contributed majorly to its present sorry state. It suffered badly during the Vietnam War and you can still see the obvious signs of bomb craters, now overgrown.  Even so, the place still gives an impression of quiet significance. 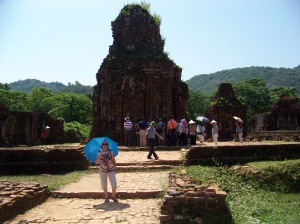 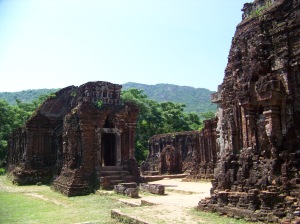 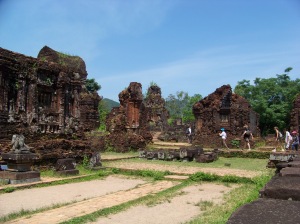 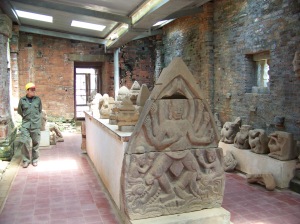 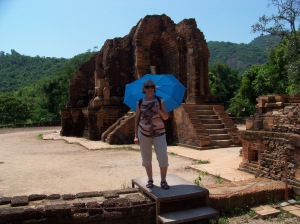 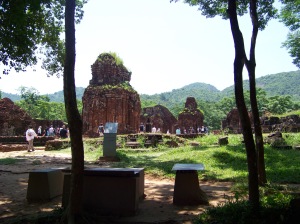 After having our fill and photos of all of those temples that had been excavated, and in some, partly restored, it was with some irony that we struck up a conversation with a couple from Texas whilst eating a couple of ice-creams in the little cafe. The elderly gentleman had last been to Vietnam when he was flying over it in B52’s, and no doubt partly responsible for the destruction of what surely was this beautiful Hindu Temple Site. Not a hint of remorse was evident.

On returning to our taxi we broke the journey at a silk factory and I bought myself a shirt, before carrying on to the hotel. We had lunch of beer and spring rolls at our usual restaurant across the road, before showering back in the room to freshen up.

We caught the 4 pm shuttle bus into The Old Town for our evening meal. We had decided to explore the opposite bank of the river so we crossed the bridge in the centre of the town. It was still quite muggy so we took our time and rested on any bench we found empty and watched life pass by for a while, before moving on a few more seats. Reaching the end of the road we turned around, crossed the road and started to retrace our steps. Before long we took a side road away from the river and after a few hundred metres came across another river. Here we sat again and watched the boats with decks filled with mopeds, bicycles and locals. We think we were witnessing the departure of the day workers and the arrival of the night workers from downstream. Every few minutes another one would pass by, filled to the gunnels with the life of Hoi An. It was fascinating. When one arrived at the small dock we were sat at we watched as all the mopeds and cycles with their riders disembarked. I had been wondering how they managed to get the machines on and off without dropping them into the river, and now we know, they manhandle them one at a time. 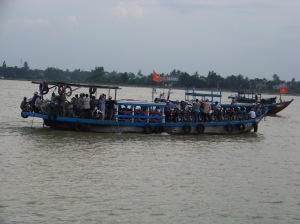 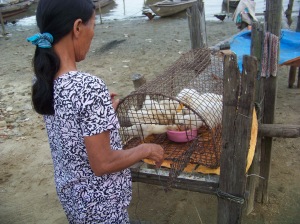 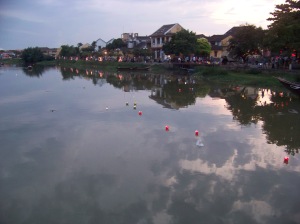 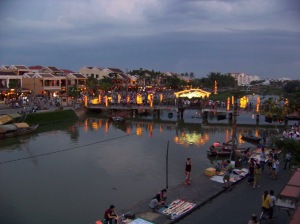 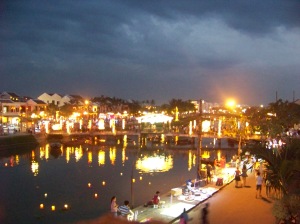 We moved on further down the river along the frontage of the local village houses. Most of them were keeping their livestock on the shore across the little path we were following. We stopped a few times to inspect some of the animals and when we took a particular fancy to about a dozen ducklings in a cage, its owner came over a fed them with what looked like a bowl of bean sprout soup. She then attempted to engage us in conversation but failed dismally. Her daughter came over and asked in halting English if we wanted to buy a duck. She failed to comprehend my sense of humour, so we moved on.
Discovering that this new river that we were following was the same as the other one, we had just crossed onto an island, doh! We couldn’t make our mind up where to eat in the myriad of restaurants we had passed and could see, so we sat in a riverside bar to take on refreshments which would hopefully stimulate the decision-making cells. It did, we bought a couple of flashy toys from a pleasant girl hawker who came to our table so that she could have some money to buy food to eat that night. And soon after, when a very sad cripple tried to sell us a free paper, we took pity on him and gave him some dollars. They both showed they were grateful but one was more deserving and in need than the other.
We eventually settled on a restaurant back over the river in the Old Town that had a table on the second-floor balcony from which we got a splendid view of the river and town life below. Again the scene was enchanting, and from our vantage point, we could see all the little lucky lanterns floating down the river, so pretty. After ordering our meal, we were quite concerned about the new light show that appeared overhead. The clouds silhouetted with ever-increasing lightning flashes and the cool breeze became decidedly stronger. The stallholders and pavement traders below seemed unperturbed so we crossed our fingers and stayed put with the other diners. Eventually, the light show diminished into the distance, the breeze abated and the food was consumed. 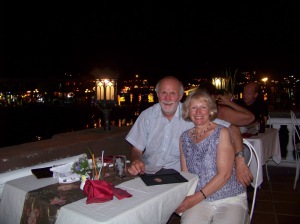 We caught the bus back to the hotel after yet another ice cream at the pick-up point and soon after arrival it was lights out!