After our trip to Clacton I unfortunately suffered from a sore ‘big toe’ which had developed during our walk around the Naze. Despite taking Ibuprofen the pain wouldn’t go away and made walking quite awkward. Discovering some tablets that I had been prescribed after a bout of gout several years ago I decided to take those. At first the pain remained the same but the side effects of a queasy stomach and drowsiness kicked in big time, so much so that after a couple of days of being in a comotose state I decided to stop and revert back to the Ibuprofen. The pain got ven worse so reluctantly I again changed back to the sleep inducing pills, this time with a minor addition. That afternoon I trotted off to the Angel to watch our English girls take on Canada in the Women’s  Rugby World Cup and naturally had a couple of pints of best British ale to celebrate a 13:13 draw and miraculously the pain disappeared!!!! Whether I publish a paper on this tremendous medical discovery will be dependent on whether I can isolate which is the critical element, women’s rugby or British beer.
Sarah has been looking to book a holiday in September and asked if I had any ideas, so I set about searching the Net to find something she might like. After rejecting dry stone walling, gliding and an eco-course I found a cruise on a tall ship as a crew member, that she liked, especially when she found out that mum had done quite the same thing some years ago (I won’t say how many as she reads these blogs).  So, on September the 20th I take her down to London to choose her hammock on the  ‘Tenacious’ and I pick her up the following week in Southampton. Wish I was going with her.
Well, on Friday (with my newly recovered toe) Sue and I made an early start (7.20am) on our journey down to Southampton to catch our own (less strenuous) cruise. The route was pretty uneventful and after around 2.75hrs we found ourselves in Hythe with plenty of time to waste before parking the car and boarding the ship.  We parked in a Waitrose carpark while we had a wander around this little town on the estuary. I had heard of the Hythe Ferry before so it was nice to see it in operation, especially as there is a little train to take you along the pier to catch the ferry itself. Hythe is quite picturesque and as such is full of retired wrinklies drinking tea and coffee in the many cafes along the High Street. We joined them.

We parked the car for the duration of the voyage at a carpark next to some barracks and after around a half an hour wait with other passengers caught the transit to the port. The traffic in Southampton as we discovered the last time we sailed from there is quite horrific and the journey took about three quarters of an hour. Check in onto the ship was quite quick and on boarding we were directed straight to the buffet. Around an hour later we had discovered our cabin (in the bowels of the ship) and were back up-top at our muster station for the compulsory life-boat drill.

As the ship left port we attended the stern leaving party and joined in with the frivolities. After an extensive exploration of the ship’s facilities we returned to our cabin to get ready for our evening meal on the second sitting at the Oriental Restaurant. Arriving a little early for the start of dining we chatted to Anne, a single lady who we had met during lunch, she had lost her husband three month prior and was brave enough to come on her own. There appears to be quite a few elderly single women on board, a strong indication that perhaps we males should try a little harder and live longer! We sat at a table for eight but there was only six of us, the other two couples were very friendly and we seemed to hit it off straight away. No doubt I will remember their names by the end of the voyage. 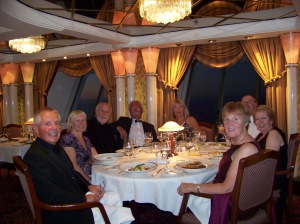 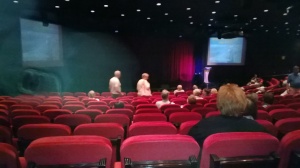 The food was excellent and guiltily I left the table feeling rather stuffed! Afterwards,the entertainment in the theatre was a brilliantly choreographed singing and dancing extravaganza loosely based on all the hit musical from the 60’s to the present. If this is the standard of entertainment we can look forward too, we shall be in for a treat.
We returned to the cabin around midnight rather tired.