After what has been the most restful night of the voyage, the only incident being where we ran over a very large whale, briefly rousing me from my slumber, I was surprised to learn that Sue had slept fitfully. On stepping onto the balcony I could see why. I scanned a scene of heaving and crashing waves that I with my veteran sea-legs and old salt demeanour had slept through, yarrrrrrr!

We chose the Brittania restaurant for breakfast on the basis that as I wouldn’t be choosing the portions size, it would be much healthier for my waistline which has already increased by one notch of the belt. On arrival at the Brittania we were seated at a table of six next to the aft window. Our fellow passengers were all single travellers, two American, one anglicised German and a muggle. From our cabin on the 8th Deck the waves had looked big, down here on Deck 2 they were mountainous!!!! It was awesome observing their power and the turbulence created by the propellers as we cut through them. Several times the ship lurched violently and caused concern as food items were momentarily out of control. Sue professed to feeling queasy but stoically British she completed the meal, talked about non-sea matters and then accompanied me back to the cabin where she felt much better. 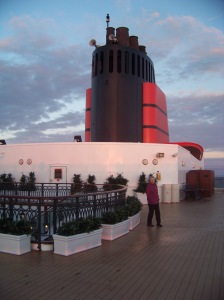 The first activity of the morning was a walk to the Golden Lion pub and a Trivia Quiz. We had passed the pub many times when these competitions had been on and they had seemed very popular. Yesterday, we had attempted to find a seat to join but were out of luck. Today we arrived early and had a choice of seats. It was a general knowledge quiz and we were also-rans in the prize stakes. However, when the answers were given out, we realised hat we used to know the correct answer before we forgot.

We moved onto one of the front lounges to read our books, but after 20 minutes a lecture on healthy eating titled ‘Eating more to lose weight’ started up. It felt like being back in school so we moved on.

After a trot down to the other end of the ship we sat through a lecture on ‘Human Interaction and Dolphins’. It was mildly interesting with the only fact I could remember being that dolphin meat is black in colour, tastes like beef liver and isn’t good for you as the species is at the top of the food chain and contains quite a lot of mercury. So Kurt Van Dannigen must be correct when he claimed that Dolphins may have come from space.! (Think about it)

Lunch beckoned so that solved what to do next. I stuffed myself full of the recommended foods from the dietary lecture, but afterwards not an inch receded from my waist or did I feel any the lighter. To console myself I consumed three large jugs of ice-cream, and for that I did feel better.

During the afternoon we went to the theatre and watched the film ‘Wolverine’. Absolute rubbish. Sue left 20 minutes before the end, but I am made of sterner stuff and saw it out. I met her again back in the cabin. Mr Pillow had been neglected so I gave him an hour or so of comfort while Sue read.

The dress for the evening meal was optional but I put on a suit and Sue put on her new dress. Ou regular dinner partners were not present but the ones that had been missing, turned up. They are a couple of Westham supporters, he owns a string of garages and she is a chef. We got on well and as is always the case they have been on millions of cruises.

The entertainment for the evening was a the singer from Indiana that had performed a couple of nights previous. We both enjoyed his choice of songs and he had an easy-going manner that warmed you to his act. I sat next to a pilot from Indiana who had been chatting to the singer earlier in the day, he was hold a seat for a lady from NY who was going to show him the sights when he docked (oh yeah) and Sue sat next to a Dutch woman who lived on the Caribbean Island of St. Barts. They owned a yacht but she refused to sail on it with her husband so had used the QE to travel Europe and back to visit relatives back in Holland over Christmas. Being on a cruise is like being in Yorkshire, you can’t stand at a bus stop for more than a few minutes without every one knowing your ancestry back to the Ark!

After the performance we strolled to a restaurant at the front of the ship and had hot cocoa before retiring for the evening. annoyingly the clocks go back again tonight and it plays havoc with you body clock and mealtimes.