Woke early to a miserable, murky day. It had rained in the night and the nice pile of dry, cut logs piled up outside the wood-store were wet! Never trust a Bulgarian weather forecast site, they speak with forked tongue! As it appeared to threaten more rain and we couldn’t see much beyond the garden walls our trip to the mountains was cancelled. In fact it didn’t rain at all during the day, but we never saw the sun and it wasn’t until late afternoon we got a glimpse of the cliffs across the valley.

Banjo didn’t get his long morning walk as the grass was wet and I feared that he would probably drown with the accumulation of drops of moisture as he pushed his way through the various meadows on route. He was disappointed but I made up for the lack of exercise by throwing the frisbee and mooing cow toy around the garden for him to fetch. He never tires of this, but I do (quite quickly).

First task of the morning was to move the woodpile into the wood-store to prevent it getting any wetter. That done, we dug up a sapling that Genya had planted earlier in the year and had given up the ghost, disposing of it on the woodpile. Another young tree was on the list to be dug up and moved to another location, but I was sceptical of this on several grounds, the main one being getting it out of the ground with sufficient root ball as to give it some chance of surviving. I found a chair and sat back and watched David dig around the sapling, I fetched him a long metal pole to lever it from the round. After a lot of heaving to no avail and one bent pole, I informed him that it had a tap root. After explaining what that was, he decided to replace the soil and have a coffee with me. Refreshed, we decided that as Genya wanted the tree moved because it encroached onto the path, we would prune it instead. Fifteen minutes later, the multi-stemmed plant was reduced to one, and looking a little pathetic, but as I assured David, it now had lots of potential. We left it at that.

We then moved onto pruning other vegetation in the garden. Two very pretty, twisted willows had been planted next to each other. They were originally bought as dwarf species but as both were now over 5m tall (not bad for one years growth) the lesson to be learnt is that even Bulgarian garden centres will tell a lie to sell a plant. They are very impressive, but now that there is no way in which to reduce their size without killing them or remove them to another location it was decided that the slightly smaller one was for the chop. Ten minutes later with a ‘seeing to’ with the chain saw we had some more wood.

The apple trees then got a less severe pruning with secateurs and the shrubs (mostly lavender) also got a trim. 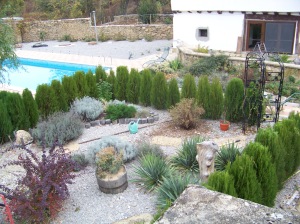 Lunch was taken: cheesy sausage rolls, garlic bread and the vicious spicy potato wedges we had tried a few weeks ago and had decided to leave in the freezer for ever. Even our after lunch coffee tasted of chili and continued to sting our lips. I surmised that such a food item would be un-sellable in the UK as they were just too ridiculously spicy. David thought they would be very popular, if sold under the name “Ridiculously Spicy Wedges”, he has a point, I would buy them!

The afternoon was spent levelling the border by the wall and placing plotchas (large, flat, heavy stones that Bulgarians put on their roof) between plants to prevent the weeds appearing (it won’t work). We had a brief visit by Milen, but as usual he never stays long when there is hard work around.

Without seeing the sun all day, late in the afternoon we called it a day. Probably due to being wedgied earlier, neither of us felt like anything to eat, though later on in the evening I made some salty Bulgarian packet soup and much to our relief it was quite bland. Indulging myself, I watched four episodes of “Spaertacus” before having a Facebook conversation about “Downton Abbey” with Sarah and Charlotte and then to bed.