Another bright and frosty morning. Woke at 8am and after coffee I took Banjo down the lane for his early morning walk. On the way back we met Mark (from across the lane) on his morning constitutional and had a brief chat about frost.

On return to the house it was decided to finish off the woodstore. After cutting a few complicated pieces to complete the side section we moved onto the easier back wall. Instead of having the wood running down we nailed it length ways and the job was soon done. We had a brief interruption when Milen came to borrow the ladder we were using to help pick the grapes for his grandfather that were growing up the side of the wall next to the woodstore. He brought a couple of bunches around a little while later.

We didn’t bother with lunch, though Banjo and I did scoff a large amount of walnuts as I was cutting wood.

The afternoon got hot so I changed into shorts. We discussed at great length how to finish off the end of the woodstore where the tile stopped. The problem was that the woodwork followed the wall and that wasn’t square, but the lats and tiles were on the square and stuck out too far for the beams to be used as a support for a 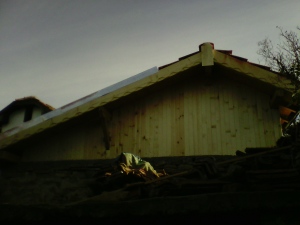 facia board and metalwork necessary to make it waterproof. We eventually had to admit that we were at a loss to find an easy way to do it without a shed load of work and adjustments. In desperation I took Banjo for a walk up the village to look at a similar roof. After discussing what I had seen we opted to bite the bullet and trim all the tiles. We nailed the facia boards in place and used them as and edge to cut the tiles to. While David cut the tiles I took Banjo down the lane to escape the dust. With the tile cutting completed I finished off the wood trim at either end and centre. After another long sit down and discussion, we set about measuring, cutting an bending the large sheet of metal that was to be used to cover the end tiles. The task was relatively easy and in no time at all we had two lengths in place. The failing light stopped us from making the third sheet, but by then the temperature had also dropped and another frost was in the offing. We sought the warmth of the house.

That evening was another hot-pot with film. However, I didn’t notice that the pot I had chosen to make the dish in was roughly a quarter size larger than the one I used previously and putting down the apparent lack of quantity of ingredients to tiredness, I chopped a load more and threw them in. It was when I had done this that David noticed the error and pointed out that they had two pots and the one I was using had never been used as it was too large. It just fitted in the wood-burner oven with the lid inverted. As it was cooking First David skyped Nan, she was well and he had just woken her up from sleep. Then he attempted to use the projector to enhance our viewing experience of that evenings showing of a film, he gave up after half an hour and later we watched it on the TV.

When the hot-pot was served, it was fearsomely good and fearsomely big. Rather foolishly we finished it off, even though the last few ladles full were ‘difficult’. This ‘over-stuffing’ of the body cavities had the effect of making siting up and watching TV increasingly painful and 3/4 the way through the film we gave up and lay down on our respective beds, and fell asleep listening to the soft gurgle of overworked gastric juices.