A cold but dry day.

The morning was spent putting the two remaining supporting pillars under the sagging beams in the pool barn. Everything went to plan and the car jack did its job magnificently and didn’t topple over once. As soon as the last pillar was in place and we were tidying up, Milen arrived. He inspected the work, nodded his approval and asked David to pick up some items from Sevlievo, which we are planning to visit tomorrow. When he left we completed the tidying up and broke for lunch: Toast and coffee. 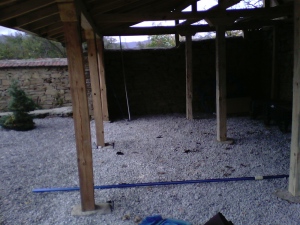 The afternoon began with dragging, carrying, wheel barrowing the old rafters from the roof that we had dropped into next doors garden, into David’s garden. When this was all done, I set about chopping them up with the chop saw into decent sized logs for the fire and David stacked them onto his already sizeable log store. The rafters were made from extremely hardwood (but now wood-wormed) and by the time I had finished, the blade on the saw was not as sharp as it should be and probably needs replacing now. 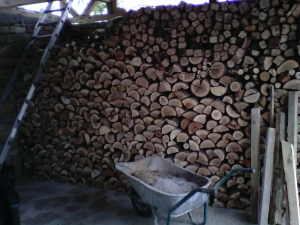 Halfway through the afternoon the already cold day, suddenly dropped in temperature. I happened so quickly that we both remarked about it and hurried to complete the job. The wood burner was lit when we eventually found the sanctuary of indoors and after microwaving the left-overs from last nights pasta bake we were warm again.

The night was spent watching “Jango Unchained”, and with the blood and gore still fresh in our minds we drifted off to beds and a peaceful sleep.